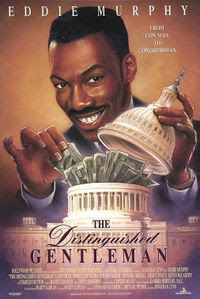 Responding to a report in today's Star on U.S. Rep. Andre Carson's latest FEC filings showing his contributions are "garnered entirely from individual lobbyist contributors and PACs" and taking a look at his latest dance card in Washington, a campaign aide for Dr. Woody Myers' campaign, Joh Padgett, likens Carson to the character Eddie Murphy played in the movie, "The Distinguished Gentleman." If you haven't seen the movie, this synopsis from Wikipedia might help:

A Florida con man named Thomas Jefferson Johnson uses the passing of the long time Congressman from his district, Jeff Johnson (who died of a seizure while having sex with his secretary), to get elected to Congress, where the money flows from lobbyists. Shortening his middle name and calling himself "Jeff" Johnson, he receives the endorsement of a political party comprised mostly of senior citizens called the "Silver Foxes."

Once on the election ballot, he uses the dead Congressman's old campaign material and runs a low budget campaign that appeals to name recognition, figuring most people do not pay much attention and simply vote for the "name you know." He wins a slim victory and is off to Washington, a place where the "streets are lined with gold."

Initially, the lucrative donations and campaign contributions roll in, but as he learns the nature of the con game in Washington D.C., he starts to see how the greed and corruption makes it difficult to address issues such as campaign finance reform, environmental protection and the possibility that electric power companies may have a product that is giving kids in a small town cancer.

"Life truly imitates art, as usual," Padgett writes in expressing his disgust at the degree to which Carson is turning to the DC lobbyists and special interests to finance his campaign. "Credibility is being strained when Andre launches a TV ad in which he decries how lobbyists and special interests have too much power in DC, then turns right around and schedules events to take campaign contributions from those same lobbyists," Padgett write. "Anybody with 1/10th of a brain know how beholden to these firms our politicians have become, and Andre being a freshman Congressman is doubly so."
Posted by Gary R. Welsh at 7:12 PM

IMDB entry on Distinguished Gentleman. I thought for an Eddie Murphy movie it was a so-so movie. The "Congressman" that exposed Murphy's con was the actor that played the Daily Planet boss on the Lois & Clark series.

WOW! The 7th race is getting nasty. I like almost all of the major candidates running, but things like this are unseemly. To compare André to a "con man" in the Distinguished Gentleman is unfair. I hope that Woody will come out and clarify.

In the The Distinguished Gentleman, Eddie Murphy shakes off his inauspicious arrival and turns into a crusader for the little guy after he sees a child who has cancer allegedly caused by the powerline companies from whom he receives campaign contributions earlier in the movie. My point is that any campaign that is going to use pop culture references needs to get them right. If Andre Carson has an epiphany like Eddie Murphy, then the 7th District will be well-cared for for decades.

I already know that the 7th district is and will continue to be well represented by Andre.

"I already know that the 7th district is and will continue to be well represented by Andre."

Excuse me while I puke.

Tell me one vote that Carson has cast that will benefit Hoosiers?
He's done nothing but cast votes along party line.
He has made is Aunt Nancy proud.
Andre Carson is a joke and in debt to lobbyists and special interest groups. DC will be laughing at Indiana for years if Carson is reelected.
I challenge Andre Carson to respond on this blog as to how his votes thus far will benefit Indiana.

Ernie Shearer: when you call our Democratic Congressman André Carson a traitor and a terrorist, nobody is going to take anything you say seriously...

"Ernie Shearer: when you call our Democratic Congressman André Carson a traitor and a terrorist, nobody is going to take anything you say seriously..."

Grandma said, "we are known by those with whom we associate".

So Wilson, Is Andre Carson afraid to address the issue here?

When the debates start anew the questions will be asked of him...that is if he the one facing Elrod.

Personally I don't think he has enough “junk” in his pants to respond on his own. Without Duncan and Co that kids lost.