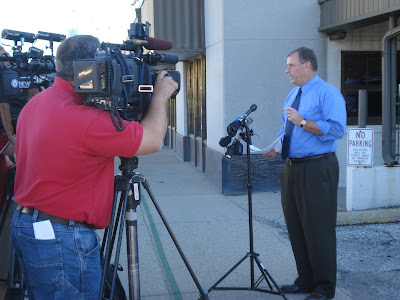 Republican mayoral hopeful Greg Ballard outlined his local government plan this morning, which calls for more consolidation but with a different twist. It's a consolidation plan which could actually provide real savings for taxpayers. Ballard's plan calls for the total elimination of township government in Marion Co, including trustees, township boards, assessors, small claims courts, constables and fire departments and selling off unnecessary township property. Ballard chose as a backdrop the Center Township Trustees office on Massachusetts Avenue, where Center Township Trustee Carl Drummer has fleeced taxpayers for more than a decade without providing any meaningful services. Drummer maintains a portfolio of real estate valued at more than $10 million, most of which is either not being utilized or being used for services other than township-related services.

Ballard's consolidation plan will no doubt upset Republicans and Democrats alike who don't want to give up their fiefdoms at the township level. His plan for consolidating fire departments will extend to the airport fire department. Ballard also thinks it is unnecessary for the county to operate and maintain the Marion Co. fairgrounds on the far southeast side of the county when the state fairgrounds offers an adequate venue for hosting the annual county fair. "Each and every property tax bill shows that government is bloated," Ballard said. "Eliminating duplicative government such as these township offices will reduce spending, reduce property tax burden, and better serve the people."

Ballard also emphasized the need for coordinated fiscal planning and prohibiting appointed boards from increasing taxes or levies; only elected bodies would be empowered to take such action under Ballard's proposal. "Our country was founded on many principles, among them no taxation without representation," Ballard said. "It is ridiculous that Marion County government would operate this way in the 21st century." "Simply put, appointed boards should not have the ability to raise taxes, period," he added. Ballard criticized Peterson for failing to lead in controlling local government spending in Marion County. "Bart Peterson has repeatedly stated he cannot be responsible for the various taxing entities and government boards that contributed to out of control spending," Ballard said. "The time for such passive leadership has passed." "As Mayor, you will never hear such an excuse from my office." "I will make sure government works together in Marion County, not against the taxpayer."
Posted by Gary R. Welsh at 9:46 AM

Consolidation doesn’t work under Peterson – what makes Ballard think it will work under his proposal? It’s not multiple layers of government that drives up the cost – it’s uncontrolled spending in the offices ABOVE the townships that are the biggest problems!

Besides, I think all these proposed consolidations are provided for in Indiana Code, which would have to be changed by state legislators, not by local fiat.

I would have been happier if he had just promised to get by with two Deputy Mayors and no Deputy Chiefs without portfolio.

10:24 AM: What has Peterson proposed to cut? What is Peterson's plan? I say it is time to give someone else a chance to try something to reduce out of control spending. If his plan doesn't work, we'll fire him too!
varangianguard: I don't think he would do it by "local fiat". What we do need, though, is someone at the local level standing up for what we need. If he needs to work through the legislature to get it done, then great. Peterson just throws his hands up and says, "not my problem."

One huge difference in Peterson's and Ballard's plans:

Peterson wants to consolidate townships to 1 or 2. He's protecting Carl Drummer and his Ghetto Mafia friends.

Ballard wants to rid of all the townships - Dem and GOP. Dems have 6 of 9 townships as of now anyway, and it'll be essentially collateral damage to dismantle Decatur Township in the effort to remove the corruption of Center Township and the Julia Carson - Carl Drummer machine.

This will not play well in Perry, Franklin and Decatur Township. It will be interesting to see what happens.

Does Ballard's plan mean that he would eliminate the infamous tag team known as The Capital Improvement Board and The Indianapolis Bond Bank that has sucked billions of dollars out of Marion County taxpayers pockets with their backroom deals?
How much land do you think the CIB is sitting on that taxpayer money was used to buy? How much is the Market Square land worth on the OPEN MARKET?

Maybe someone should check into the finacial straits perry was left in after the sandlin years. Fire side cant even float a loan (another) to continue as is. Rumor is layoffs are pending in the fire service

Even though Ballard is running as a Republican, he might as well run an Independent because the GOP doesn't help him.

Hopefully once he gets into office he'll eliminate the problem government on both sides of the aisle.

Will Ballard help Mayor Peterson lobby the legislature in 2008 to get Indianapolis works passed?

There are over 1000 townships in Indiana. Where is the outrage in Posey and Steuben Counties?

Wilson - There are over 1000 townships in Indiana. Where is the outrage in Posey and Steuben Counties?


That number ALONE should be the reason to get rid of townships !

Whatever happened to the traditional Republican Gospel of small, local government responsive to local voters and the opposition to big, centralized bureaucracies? Oh well...

Gary,
You really should look into the financial troubles of Perry Township. They are getting ready to lay off up to 70 FULL-TIME firefighters. The department is already operating most apparatus short and have NO aerial/ladder truck available due to staffing. Former Trustee Spradlin(? sp) left them high and dry and they've got an arrogant board that thinks they are untouchable and refuse to hear anything from those whose livelihoods are affected. Add that to the fiasco that is the school board there and you have a real argument about ending all the bureaucratic mess that is township government and corrupt school boards, both of whom believe they have free reign to spend tax money without accountability.

This isn't consolidation --- it's elimination. It's gonna happen one way or another, so we may as well decide who it is we want to lead us through the process. If we keep the current band of brothers, we're headed for terminal chaos. If we allow new leadership who isn't going to pay lobbyists more than any one corporation in the state, and Ballard certainly isn't the kind of man that's gonna use tax payers dollars to pad the lining of his friends. Ballard is by all rights, for the people. He's got hard decisions to make. Everybody's waiting for this oh so incredible plan to fix this and it's not gonna happen. It certainly won't be easy to heal this city, but one thing's for sure, those in office now aren't healing anything ... their sucking the life and money right out of us and our pockets. If you haven't met Greg, he's really out there. Rumor has it he's spending time at GOP headquarters on Saturday afternoons to meet people --- before you jump to decisions about the man --- meet him. Ask about his plan. Bart Peterson is no better than Jack Sandlin --- he's bankrupting the city just like Sandlin bankrupt the township --- or stressed it to the point of not even being able to provide firefighters/medics for the community. It's pathetic.

There are over 1000 townships in Indiana. Where is the outrage in Posey and Steuben Counties?

Wow. I do believe that is what's called 'playing the race card.'

For many years, the local Republicans played the race card bigtime like a crooked dealer using a stacked deck with marked cards. Forgot so soon?

Wilson, 39 years ago center township elected its first black what ever and look at the mess they are in now. can you can you say crime, corruption, strong arming, illegal gambling pea shake houses protected by the ghetto mafia, political corruption on the council, ethics violations. the only way these bastards are going to be happy is when the feds haul their a$$es off in hand cuffs

Greg Ballard will be in the Beech Grove parade this Saturday starting at noon and after that at 120 E Vermont street around 3:00 pm.
Please stop by and meet him and If any of you can volunteer please talk to someone at the parade or the meet and greet at 120 East Vermont street.

Most of what Ballard desires, cannot be accomplisihed by the Mayor. Legislative action is required.

That said, townships need to go. The Mayor has long advocated most of that plan, but Republicans in the General Assembly have conspired to deny him a victory, mostly out of pure political spie.

Wilson is wrong (again). Traditional Republican platforms are not government closest to the people when it's bloated and duplicitous. Ballard is confused on his plan, all over the board and flopping abou tlike a fish out of water.

Which would let Carl "Drummond" off the hook as well as Carl Drummer. Don't know the former, but the latter:

1. Drives a wasteful police crsuier, outfitted with lights, siren, heavily-tinted windows worthy of a Pacer, and radios out the whazoo.

2. Has routinely bought properties for Center, taken them off tax rolls, never to return, and has no rela plan for the properties, except hording them

3. Has routinely stored manyt of his personal cars inside one of those buildings, rent-free.

4. (This one takes the cake) Leased space in the Trustee's Building on Fall Creek to a restaurant without a lease document, without proper construction permits (a typical landlord responsibility to check) and organized bgy cronies without public bidding.

Corrupt, thy name is Drummond, er, Drummer. And race has not a damn thing to do with it Wilson, so stop playing the card.

Hey Ballard the City/County does not own the Marion County Fair Grounds. Damm man, do the work.

Townships need to be completely eliminated in Indiana. They breed small town corruption allowing their trustee, and boards to give themselves and their families jobs paid out of our own tax money. I believe that Indiana should do away with townships, fire the trustees, and save all Hoosiers possibly millions in lost tax dollars due to the corruption of this small town government. If you want to see a good example of township corruption, take a look at what is going on with the current Ohio Township Trustee and board in Warrick County, IN.