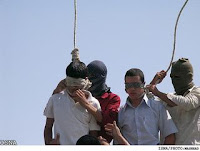 Iranian President Mahmoud Ahmadinejad taking the stage at Columbia University and declaring that there were no gays in Iran probably did more to advance gay rights in America than anything any single American has said on the subject in the last two decades. In Iran we don't have homosexuals like in your country," Ahmadinejad said to howls and boos among the Columbia University audience. "In Iran we do not have this phenomenon, I don't know who has told you that we have it," he said.

As with Hitler's Final Solution for eradicating all Jews, so too does Ahmadinejad and his Islamic Republic of Iran have a final solution for gays. Under strict Islamic law adopted by Iran, homosexuality is a crime punishable by death. Advance Indiana included a summary of Islamic law enforced in Iran in a post two years ago reporting on two gay teenagers who were hung in a public square, which goes as follows:

Homosexuality is illegal, those charged with love-making are given a choice of four deathstyles: being hanged, stoned, halved by a sword, or dropped from the highest perch. According to Article 152, if two men not related by blood are discovered naked under one cover without good reason, both will be punished at a judge's discretion. Gay teens (Article 144) are also punished at a judge's discretion. Rubbing one's penis between the thighs without penetration (tafheed) shall be punished by 100 lashes for each offender. This act, known to the English-speaking world as "frottage" is punishable by death if the "offender" is a non-Moslem. If frottage is thrice repeated and penalty-lashes have failed to stop such repetitions, upon the fourth "offense" both men will be put to death. According to Article 156, a person who repents and confesses his gay behavior prior to his identification by four witnesses, may be pardoned. Even kissing "with lust" (Article 155) is forbidden. This bizarre law works to eliminate old Persian male-bonding customs, including common kissing and holding hands in public.

When asked about the capital punishment practices in Iran, Ahmadinejad defended it by saying, "Don't you have capital punishment in the United States? You do too. In Iran there is capital punishment," he said. It's just another reminder of the danger of allowing religious extremists to impose their view of morality on our civil laws.
Posted by Gary R. Welsh at 6:39 AM

I guess its safe to assume there will be no post about our racist Coroner since you are representing the plaintiffs, right Gary. There is SO much the public deserves to know about what has occured at MCCO.

Can we stay on topic, please? Last time I looked, the owner of this blog is an attorney too, and makes no secret that he derives his income solely form that. Get over it already.

This post is a solemn reminder of the importance of one of Christians' most-holy commandments (actually two): love one another, and thou shalt not kill.

I've been to the Middle East. Few nations there vary vastly from Iran's treatment of homosexuals.

Ditto adulterers in strict Muslim society. Thieves, too, are often met with an Islamic cleric who, uh, removes the offending hand.

We have our own religious extremists here. They don't advocate violence--they prefer Constitutional shunning of 15% of the state's population. Much more convenient, less messy.

It's not about "getting over it already", its about exposing more corruption, racism, and the abuse of power by an elected official in Marion County. Does your God weep over that as well?

Homosexuality must be more prevalent that Amahdinejad says if they actually have a word for a specific act ~ "tafheed".

This is about theat nutjob Iranian president, not the nutjob county coroner. At least Ackles doesn't have people murdered.

I'll give all the FACTS about Dr. Ackles and MCCO as soon as Gary makes a post. How about and open fourm post dedicated to MCCO? It would take up several pages, I guarantee it.

He's not competent enough to pull anything like that off.

Back to the topic - I'm certainly no fan of Iran - not since the original nutjob Khomeni (sp?) took over. Mamamud Amadamnnutjob has lots of bad qualities never mind the gay stuff. He wants to finish the job the nutty Austrian started of eliminating everyone not like him, starting with the Jews. Now this goofball wants a nuke? Pshaw!

7:42 - Thieves get a hand cut off. that's nothing I catch someone stealing my stuff they'll wish they were only getting a hand chopped off. Same goes for carjacking. 15% of the state population? Right. Maybe 15% of Bloomington, but not the entire state.

That's really odd. I thought Columbia was the school that booted military recruiters from campus because of 'don't ask don't tell' policies, yet they have this guy come and talk who executes gays! Can someone help me out with the logic employed here? Oh wait, that's right, it's not logical, it's hypocritical. Now I remember why I ran from the left.

"We have our own religious extremists here. They don't advocate violence--they prefer Constitutional shunning of 15% of the state's population. Much more convenient, less messy."

What group that composes 15% of the state's population? And what does it have to do with religion?

my God weeps? LOL What god do you worship?

"my God weeps? LOL What god do you worship?"

God has a sadistic sense of humor. Nothing makes him weep.