Bosma's All In The Family 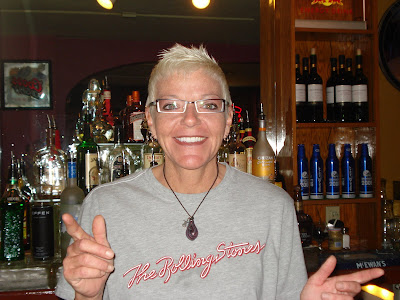 If you're having one of those days when things aren't going well, there isn't a person more able to brighten your day with her warm and friendly smile than Amy Klemm. The 40-year-old Indianapolis native works as a day-time bartender for the Mass Ave Pub Tuesday through Saturday. She and her sister, Angie, share something more in common than being siblings. They are both lesbians and proud of who they are. As the old saying goes, there's at least one in every family. What makes Amy's and Angie's family different than most (other than the fact there are at least two in their family) is their well-known cousin, the leading legislative advocate for enshrining discrimination against same-sex couples into the Indiana Constitution.
That cousin is none other than House Republican Leader Brian Bosma, who once declared a constitutional ban on gay marriage to be the highest priority before the Indiana General Assembly. They are cousins by marriage. After their father passed away while Amy was still a teen-ager, her mother met and fell in love with Harold Bosma, who like her mother, had lost his lifetime partner too early in life. Harold's brother, Charles, was Brian's father. Together, Harold and Charles operated Bosma's Dairy in Beech Grove. As Amy described the two, Harold was the work horse, while Charles was the show horse, devoting a great deal of his time to a favorite family pass time--politics.
Amy has known Brian as long as she's been old enough to remember anything in her life. They attended church together weekly at Emmaus Lutheran Church in Fountain Square. Brian's mother, Marge, who Amy called a "Saint" taught her kindergarten class--both times. She started to school at an early age and Marge had her to repeat the class to better prepare her for elementary school. Marge would tudor Amy with her studies throughout her early learning years. Amy and her sister spent a lot of time during the summer at their home swimming in their backyard pool.
Strict adherence to tradition was extremely important in the Charles Bosma family according to Amy. While the thought of accepting Amy and her sister as lesbians would be a forbidden discussion in the Charles Bosma family, in the Harold Bosma family it was openly discussed and accepted. Harold knew the day he married her mother more than 22 years ago that he was taking on two lesbian step-daughters Amy said. When her sister, Angie, and her same-sex partner celebrated a unity ceremony in Broad Ripple 12 years ago, there would be nobody present from that other side of the Bosma family.
Amy sees a lot of Charles Bosma in Brian. Charles Bosma served in the Indiana General Assembly for an extended period decades ago, and his youngest child and only son often accompanied him to work. Charles Bosma's political fortunes rose with Keith Bulen's ascension as the party boss of the Marion Co. GOP back in the 1960s. Bosma's father served in the Indiana Senate when such matters as the Equal Rights Amendment and Uni-Gov for Marion Co. were before the legislature. Charles was a strident opponent of the ERA. "[The ERA] would deal a severe blow to the time-honored relationship between husbands and wives," he declared during the debate in 1973. A fellow senator, Robert Garton, rhetorically asked, "Was the Constitution written just for males?"
Charles didn't have as much fortitude about his beliefs when it came time to a vote on the Uni-Gov legislation being pushed by then-Mayor Richard Lugar. Charles skipped out on the vote so he wouldn't have to vote "yes" or "no". Ironically, Charles cast the deciding vote in the Senate to pass a property tax plan proposed by Gov. Otis Bowen, which allowed Marion County to impose the local option income tax to reduce property taxes. That's the same tax Mayor Peterson just hiked another 65% without providing a dime's worth of property tax relief. His son is now leading the charge in the legislature to roll back property taxes after all these years. Charles died many years later from a brain aneurysm while on his way to work at the State House to play the game of politics he loved so much.
Amy and her sister are by no means close to Brian Bosma and his family these days. They see each other at least a couple of times at year at family gatherings around the holidays. Brian is always friendly and cordial towards Amy and her sister. She says they don't discuss politics, and they don't discuss their sexual orientation. Amy doesn't live in Brian's legislative district, but if she did, would she vote for him? "Absolutely not," she replied. She and her sister are, not surprisingly, disgusted by their cousin's outspoken advocacy for discrimination against gays and lesbians. "It shouldn't matter to him who I choose to love in life as long as I'm happy," she said. "His religion forgets to teach him that you should judge not, lest ye be judged," she added.
Asked if she had any advice she would offer Brian, she had this reply: "Brian and his wife have two beautiful children. Whoever they choose to love in life, I hope they support them fully so they can be happy in their lives." Brian should consider himself lucky to have as a cousin a person as wonderful as Amy is. If she's working when you stop by the Mass Ave Pub, you can always count on being greeted by her warm, friendly smile and her welcoming hello. If you stop in, please tell her Gary sent you.
Note: Historical matters pertaining to Charles Bosma's legislative service are drawn from "The Centennial History of the Indiana General Assembly."
Posted by Gary R. Welsh at 5:39 PM

Priceless, Gary. Thanks for sharing.

You'all need to get to know Brian better. He is great to have a Red wine or beer with. You can't tell me that Pat Bauer has been the answer. Chill out on the personal attacks!

We need to get to know Brian Bosma better?

He needs to get to know US better. His glittering generalities about our lifestyle are choking me. Pun intended.

But, if he'd like to meet at Metro for a drink, I'll be glad to drag some friends out and tell them to be on their best behavior.

I've always thought BB was very in touch with his feminine side...

I've been told that Brian is secretly livid over the way he wasn't told about how the language of SJR7 came to be, but his complaints to Eric Miller and attorney Jim Bopp have gone nowhere. Same thing with the property tax fiasco.

Don't kid yourself, 1:08. Brian knows everything.

He can't play dumb, unless he thinks we're dumb.

He doens't even beleive some of his rants. It's pure pandering, for potential future office. He fancies himself governor someday. Seriously.

No really, he does. Stop laughing.