IndyCar driver Justin Wilson was rushed to the hospital after he appeared to suffer a head injury when he was struck by flying debris in the final laps of today's ABC Supply 500 at Pocono. Wilson was knocked unconscious and flown by helicopter to a hospital in Allentown, Pennsylvania according to news reports. Sage Karam, who was leading the race at the time, spun out and struck the wall in Turn 1 of the track. It appears debris from Karam's car was what struck Wilson in the head. The race went on and Ryan Hunter-Reay, Wilson's teammate, went on to win the race under caution. No word on Wilson's condition yet. Let's hope for the best for him and his family. Karam suffered a minor foot injury in the crash and was able to get out of his wrecked car under his own power.

UPDATE: A statement released by IndyCar indicates Wilson is in a coma in critical condition. Not good news. 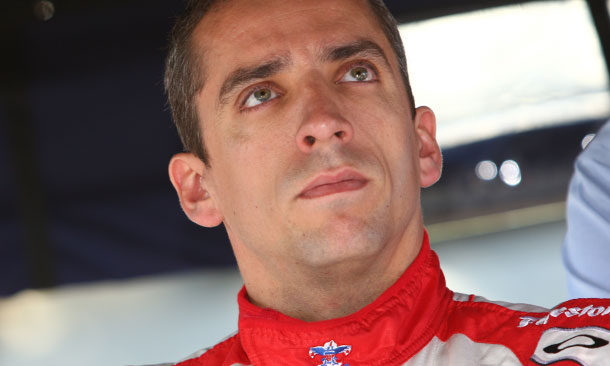 I saw that and before Wilson's car came to a stop I knew he was in trouble. His helmet was cocked over to the driver's left side. I've seen that a few times and usually isn't good. When TV does a wide shot so you can't tell whats going on at a crash recovery that's never a good sign.

Steve Matchett brought up it was similar to what happened in Formula One when the rear spring came out of Rubens Barrichello's Honda and it hit Felipe Massa in the head. Massa was knocked out, was out for the remainder of the year but luckily he came back and is still driving in F-1.

In contrast, Jules Bianchi recently died after going off track and submarining a tractor recovering another stalled race car in Japan last fall. He lingered on after a head injury but never regained consciousness. Also read in overseas media that Michael Schumacher's wife has put several of Michael's "toys" up for sale as she stated "He'll likely never need them again" after his skiing accident and resulting head injury.

The Indycar is an unsafe disaster that shouldn't be allowed on any track, anywhere.

Justin's impact was caused by Karam hitting the wall while doing nothing unusual or aggressive. The IRL car just snaps loose and heads for the wall without giving the driver any warning. One second, Sage is leading while driving a normal line, and the next, he's in the wall, and a debris cloud blankets the track.

Track owners should deny the Indycar access as unsafe. State licensing bodies should ban the car.

The IRL car is a piece of junk disaster. The last time American Open Wheel had a decent car was with the ChampCar specs. Indycar needs to retire this piece of junk and have the teams order late 90's - early 00's CART/ChampCars.

Have you ever watched movies of the old Indy Cars that raced at the Speedway? These cars are more safe today than ever. There's always room for improvement, and they do a good job of adding new features to address problems as they arrive.

There is a difference between safe and stable. While you are correct Gary that the modern cars are more safe the the vintage cars these cars aren't stable. They shouldn't break loose as easily as they do. That should have been the leagues focus and not wasting the $ on these stupid aero kits.

"Have you ever watched movies of the old Indy Cars that raced at the Speedway?"

The entire 1973 "500" is on YouTube, complete with the Swede Savage and Salt Walther crashes.

The same ones that Greg Moore was killed in, and Alex Zanardi was almost killed in when he "just snaps loose" while leading at Lausitz and gets his legs cut off?

Before we everyone starts with a knee-jerk reaction to "STOP THE RACE", realize that these guys and gals know the danger and love what they do. No one is holding a gun to their head.

Will some mathematician do the rates on the odds on this???? Space travel is probably more dangerous - there is NO ONE going to get them!