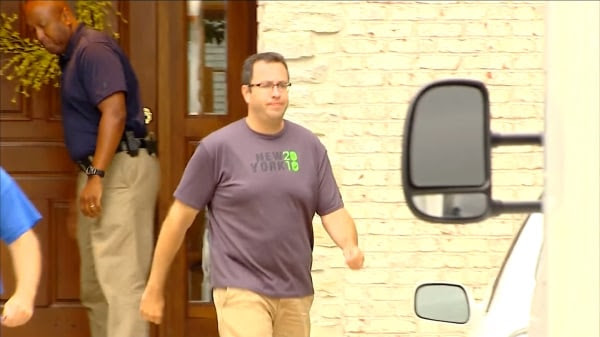 Fox 59 News is reporting the U.S. Attorney's Office for the Southern District of Indiana will announce tomorrow a plea agreement with former Subway spokesman Jared Fogle. According to the report, Fogle will plead guilty to illegally possessing child pornography.

Fogle's attorney, Ron Elberger, declined to comment to Fox 59 News on this new development. Elberger has previously stated that  his client was innocent and that nothing was found on his computers or in his home when law enforcement raided it last month.

UPDATE: Details of the plea agreement are emerging as Fogle arrived at the federal courthouse in downtown Indianapolis this morning for his initial court appearance after reaching a plea agreement with federal prosecutors. Various news reports confirm Fogle will plead guilty not only to receiving and distributing child pornography but also for having sex with minors. Fogle reportedly received the child pornographic images from Russell Taylor, the long-time executive director of his nonprofit foundation. Fogle could face many years in prison as part of the plea agreement. More to come.
Posted by Gary R. Welsh at 4:37 PM

When will this fraud be exposed for falsely claiming weight loss on a Subway diet attributable to bariatric surgery?

Thank goodness he's an IU alum instead of Purdue. Purdue already gets enough negative attention as it is from our football team.

Same southern district that can't find its ass with a map?

Not always. People have been known to plead guilty to crimes they didn't commit as a result of the actions of overzealous police and prosecutors, or advice they receive from their attorneys. It's actually a common occurrence. You know you're innocent, but you don't have the resources to fight the government. You're offered the chance to plead to a lesser charge and avoid jail time. Your attorney twists your arm to accept the agreement or he's going to walk away from your case. Men plead guilty to misdemeanor charges all the time in domestic cases where they insist they never struck their wife or girlfriend.

Your computer can be accessed remotely and images planted on it that you knew nothing about. Your e-mail account or cell phone can be accessed by a third party and used to send images you never sent. In a lot of these federal cases, people are nabbed who had no known predisposition to engage in these activities and are induced to accept the images from an undercover agent. The initial arrest is all people remember. Your reputation is ruined from that moment on regardless of your guilt or innocence.

Come on Gary, do you honestly believe he's not guilty? Your 7:55 comment is all true, but the body of evidence against Mr. Man Boobs is pretty compelling. He couldn't keep his fly shut and he couldn't keep his pie hole shut. And Anon 7:38, he's pleading to possession, which suggests that they probably would have prosecuted for trafficking. Just guessing, but he didn't waste much time accepting a plea. He hasn't even been charged yet. That suggests he's guilty as sin.

Did I say that? I was reacting to a comment that any person who pleads guilty to a crime is guilty of committing that crime. I think it's important for people to know it's common knowledge within the legal profession that people admit to crimes every day they never committed for a variety of reasons.

I guess Subway is going to need a new fat guy to be their spokesman. I never thought slimming down to Jared's size was much of an advertisement since he's still round and pudgy. But I was just at the State Fair, and large Indiana men are everywhere. It was big boys looking at the fattened hogs. Big boys looking at the fattened cattle. Big boys squeezing into those little ride seats. The only guys that weren't fattened up yet were the young high schoolers, but watching them dig into those elephant ears and rib eye steaks; you know in a few years they'll outgrow those 30 inch jeans. Subway. I saw a guy eat two foot long BLT's the other day in about ten minutes. He unbuttoned his jeans before he sat down to eat. I'm guessing he was about size 46. But really, I thought he looked way better than Jared. What guy wants to be super thin? Most of the guys I see at the Colts games are up around 200lbs and they look just fine. Subway ought to get somebody like Coby Fleener as their spokesman. Eat Subway. Gain muscle like Coby. A proud 252 lbs.