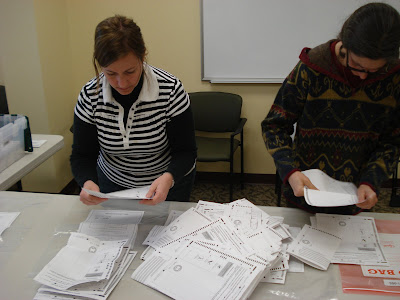 The handcount of paper ballots at my Lockerbie precinct (11-005) just concluded and it's very good news for Jon Elrod. He handily beat Democrat Andre Carson 107-72, or 58.5% to Carson's 39%. Libertarian Sean Shepard collected just 4 votes or 2%. This vote total is significant for a couple of reasons. Turnout at this affluent, mostly white precinct was about 25%, which is higher than reported in other areas in the district. Particularly troubling for Carson is the fact that this precinct traditionally votes Democratic. Former Rep. Julia Carson easily won here by at least 2-1 margins. A total of 243 of the precinct's 989 registered voters cast ballots today. Another 61 votes were cast on electronic machines and won't be counted until the memory cards are delivered to the central voting center tonight in the convention center.
In Warren Township 20, Elrod captures more than 75% of the vote to Carson's 22%. Elrod gets 91 votes, Carson 26 votes and Shepard 3 votes.
In Warren Township 19, Elrod captured about 71% of the vote with 141 votes to Carson's 49 votes. Shepard collected 10 votes.
In Warren Township 22, Elrod captured 55% of the vote with 153 votes to Carson's 115 votes. Shepard got 8 votes.
In Washington Township, several racially-mixed Democratic precincts turned out pretty big and went for Carson by about a 57% margin. It looks like Carson hit his targets here.
Follow the results from WTHR's website here.
Posted by Gary R. Welsh at 5:38 PM

You had 61 votes on electronic machines? How? The only machine we had was for people who were blind.

Unfortunately in Pike Township where I was, the Carson machine was out in full force. Turnout was about 20%, much higher than expected. (I guarantee you though the newspaper will report low turnout...they always do no matter what the turnout is.)

The mood in the Pike precincts were totally different that in the 2007 mayoral election. Then you got the sense a lot of Dems were scratching to vote against Peterson. (In fact the Democrat I worked with at the polls in 2007was pulling for Ballard big time and was very angry at Peterson.) Not so today.

As a side note, as a politico I commend Carson's campaign on the quality of their doorhanger. While I didn't agree with the message on the doorhanger, the layout, the unusual colors, the pictures were terrific. It was one of the best done political pieces I've ever seen.

"You mean I was supposed to wait until AFTER the count?"

Beth White is a visionarist, she known of the missing 6,500 missing ballots all alone. People this is not a black or white issue, it is a criminal one. Good Job Beth, I hope you will be able to sleep a night. For our city is on the road to turmoil.

If there were 61 votes on the handicapped machine, someone was trying to steal some votes without a paper trail.

I hope these aren't Republicans making fun of Beth White. Ms. White screws up 80% of elections. Doris Anne Sadler screwed up 100% of the elections.

Democrats are calling the race over with 25% of the vote still out.

Star just called it for Carson. :(

I am so proud of Indy. We have sent the best we have to offer to Washington D C. We should all be proud.

Gary,....maybe you can explain why so many precincts have no republican precinct board workers...I visited many precincts in various parts of the city and the story was same in many place...no republican judge or sheriff.......including the precinct you live in...are republicans too good to work at the polling places?