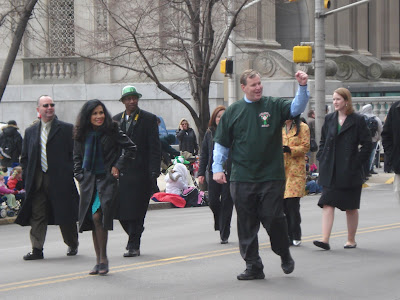 Mayor Greg Ballard had plenty of reasons to be upbeat during this year's St. Patrick's Day parade despite the gloomy, cold temperatures. There's lots of property tax relief for Marion County homeowners, permanent caps on the amount they will be taxed and $65 million in costs the state is picking up in the future which county taxpayers have been paying on their property tax bills. Mayor Ballard will have to find at least $11 million in savings in the 2009 budget and another $39 million in savings for the 2010 budget because of the phase-in of the property tax caps. Ballard promised he would find at least $70 million in cuts. I'm hoping his administration doesn't count the $65 million in expenses the state is picking up. The people fully expect him to find a way to cut the county option income tax or find additional property tax savings with the added county option income tax revenues. Former Mayor Bart Peterson had anticipated using about $30 million of the COIT revenues from last year's $90 million tax increase to pay debt service on bonds he planned to sell to finance debt on the unpaid public safety pension liability. The state has now agreed to pick up that debt as part of the property tax reform and relief legislation approved by the legislature. Ballard indicated at his press conference today he intends to continue to look for those cuts according to the Star. "This is a big win for the city, though we have significant challenges still to face," Ballard said. "This won't lessen the need to make cuts in spending."

I wonder if Winnie Ballard was accompanied in the Parade by her new Chief-of-Staff: Melissa Hauger ($32.5K/yr)...