Welcome To The Stage The Great Emperor 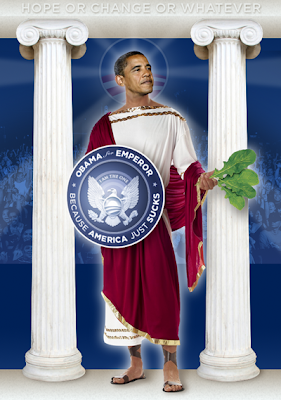 Whoever had the bright idea of creating a stage modeled after an ancient Greek temple for Sen. Barack Obama to deliver his acceptance speech at the Democratic National Convention played right into the hands of critics who are convinced Obama is the most self-centered, self-worshiping politician in modern American politics. Yes, a Greek temple would be a place where you worship the gods.

Hat tip to the Political Inquirer.

To the paid Democratic blogger who is poking fun at this post, I refer you to the ABC News blog discussing this "Greek Tragedy". And did I mention that Obama's stage designer also handled Britney Spears last concert tour?

Said one Democrat: "This is a disaster of mythical proportions." Said another: "It's not enough that he wants to be president -- he wants to be Zeus." Said the first: "Will he send down thunderbolts from the mountain?"

Those are the Democrats -- though assuredly not Obama partisans. Cue the Republicans: The RNC blasted around an e-mail referring to the "Temple of Obama."

Gary, I think your party should be more concerned about a little hurricane named Gustav that's expected to make landfall in New Orleans in the next few days than my party should be about Roman columns.

Tomorrow is the third anniversary of Katrina, and we all remember that John McCain was enjoying birthday cake with George Bush on that fateful day.

I think we should all keep the residents of New Orleans in our thoughts, and hope the government can respond better than it did before.

Boy it didn't take long for the Daily Kooks to bring up Katrina.

I'm sure the people of NO will be fine now that La. has a competent governor.

Vox, you do realize that the first responder in a hurricane is the Mayor and the second responder is the Governor. Now which political party did those characters they belong to.

The fault regarding Katrina lies squarely at the feet of Mayor Nagy, a Democrat.

Render unto Obama that which is Obama's

So Gary, what is your take on Bush's Temple in 2004, which looks more grand then Obama's lecturn?

I'm surprised you didn't pick up on (or comment on, at least) the obvious psy-ops last night.

I mean really, running all the way down the rollcall until they get to Hil and (TA DA!) she gets full national attention to make her grandstanding, divided-faction-healing speech about dispensing with the pesky procedural rules and boldly proclaims they should all just agree Obama gets the nomination. Make her look like the goodguy, while simultaneously burning the rest of the delgations that eagerly wanted to make their flowery speeches on live TV.

That was about as obvious a bit of theater as there could possibly be.

Ok, so the video shows Bush's grand temple and theatrics better then the pictures whe he accepted his party's nomination:

Now, why is Obama's stage looked down upon and critisized by the GOP and its supporters? I see that Bush not only implored greek temples and even a small pyramid shapped podium. Seems to be this is a classic double standard of GOP talking points, trying to paint Obama as a snobby elitist, when in fact, its the GOP who is the elitist in the political world.

1. No matter what setting was constructed for the speech tonight, you would have been critical.

3. No rules were broken last night. Every step that was made referenced the provision of the rules and bylaws and the entire convention voted on the changes.

Last night you saw a family of united Democrats who are going to achieve victories all throughout this country.

Is this what is commonly referred to as "The Temple Of Doom"?
Makes one wonder what is in store for America if this self-absorbed elitist is elected.

The Obama home has to have more than one bathroom...there is no way Michelle or the girls could get ready for anything with this clown primping in the mirrors constantly.

So you Obama lovers want to talk about Hurricane Katrina and what President Bush's backdrop looked like at the 2004 convention. The Hurricane Katrina debacle laid clearly at the doorsteps of the incompetent Democratic mayor and Democratic governor, neither of whom implemented a plan of evacuation as called for. The idea of using the "Bush did it too" defense. That just won't cut it. You Obama people maintain that Bush is callous, uncaring and should be impeached for exceeding his constitutional authority. Why then would Obama want to emulate anything Bush has done?

I heard that the Dumocratic Convention will close with the song “Your So Vain...someone needs to contact Carley Simon and see if it’s true that the song was really written for Obama. Maybe now the truth will finally come out.

I watched DNC and BO tonight, and had to sit there and shake my head in disbelief.

During one of the pauses in the festivities, the loud speakers started playing Bruce Springsteen's Born in the USA. The crowd waved flags and enthusiastically sang the refrain. However, I doubt most of them knew the rest of the lyrics.

Getting to be an old timer as I am, I do recall the lyrics:

Come back home to the refinery
Hiring man says "Son if it was up to me"
I go down to see the V.A. man
He said "Son don't you understand"

I had a buddy at Khe Sahn
Fighting off the Viet Cong
They're still there, he's all gone
He had a little girl in Saigon
I got a picture of him in her arms

Down in the shadow of the penitentiary
Out by the gas fires of the refinery
I'm ten years down the road
Nowhere to run, ain't got nowhere to go

The song is one of despair, failed economy, death and war. It was written by Springsteen as a tribute to friends and loved ones that had served in Viet Nam, and the hardships vets and others faced. It was also a song that Reagan tapped as one of his theme songs in 1984.

For a convention and speech that was supposed to be based on "hope" and "change"; for a convention that was to espouse the ideas of getting America back on the "right track"; for a speech that was supposed to encourage and uplift the masses, they sure picked a lousy song. But I guess BO and his handlers didn't bother to listen to the entire song, and only wanted to grab the catch phrase of, "Born in the USA".

The Rocky Mountain News (http://www.rockymountainnews.com/news/2008/aug/28/obama-makes-surprise-visit-illinois-women/) had a story in Thursday's on line addition where Obama stopped to visit some Illinois delegates at lunch. According to the paper:

"Here we were eating lunch, and it was like the clouds parted and the sun was shining in," she said.

I guess that's what happens when the messiah shows up.