Biden Gets The Call? 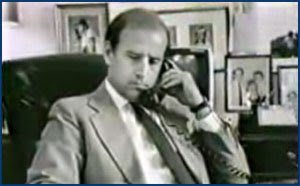 The AP confirmed that both Sen. Evan Bayh and Gov. Tim Kaine got word from Sen. Obama earlier today that they weren't his choice for vice president. Instead, it looks like the call went out to Sen. Joe Biden. The Swamp says a private jet which left Chicago's Midway Airport landed not long ago at New Castle County Airport near Biden's home in Delaware. ABC News also confirms that a Secret Service detail has been sent to Biden's home.

If Sen. Obama wanted a pathological egotist as a running mate to match his own character flaws, he found that man in Sen. Joe Biden. Like Obama, Sen. Biden has been caught blatantly plagiarizing the speeches of other political leaders. As a candidate for president in 1988, Biden not only plagiarized the speeches of British Labour Leader Neil Kinnok, he also was busted for inflating his resume by claiming such things as academic honors in law school. He actually finished 76th out of 85. I loved this classic remark he made back then in response to his resume inflation as noted by Chris Cilizza:

One of the most overlooked episodes during the 1987 collapse of Biden's campaign was a snippet of footage captured by C-Span in which the Delaware senator, in response to a question about where he went to law school and what sort of grades he received, delivered this classic line: "I think I have a much higher IQ than you do."

Like Obama, Biden is in love with himself and loves to hear himself talk. Biden has meticulously undergone several hair transplants to treat his balding head with some success, as long as he is facing the camera, which he loves to do. Biden's comments about Obama are priceless. "I mean, you got the first mainstream African-American who is articulate and bright and clean and a nice-looking guy ... I mean, that's a storybook, man," Biden said of Obama. Earlier this year as a presidential opponent, Biden questioned his qualifications. "I think he can be ready, but right now I don't think he is. The presidency is not something that lends itself to on-the-job training." Yes, Obama found the man he's been looking for all along. Himself. And he swept himself off the floor.
UPDATE: It's now official. The Obama campaign leaked its official decision to the media hours ahead of the promised text message to supporters that they would be the first to know who he had chosen. The McCain campaign immediately hit the Biden choice hard, noting in a statement that Biden had "denounced Barack Obama's poor foreign policy judgment and has strongly argued in his own words what Americans are quickly realizing—that Barack Obama is not ready to be president."
Posted by Gary R. Welsh at 8:40 PM

Interesting since your candidate for president graduated 894 out of 899.

That is a factoid often recited by Wilson in comments on this blog. McCain never boasted of being the smartest guy in the class. Far from it. He didn't even want to go to the Naval Academy. It was expected of him because his father and grandfather had gone there.

Was a Reagan appointed US Attorney; three term Congressman from Georgia; supports on overhaul of the entire US tax system; drastically wants to reduce government spending; allow the free market to develop alternative energy and fuel sources; put the majority of the power to govern back where it belongs, at the state level and much more.

Barr's ideas are those of one who believes that the American PEOPLE can solve the American problems. Not big brother or the nanny state.

From the US Consitution Bill of Rights:

Amendment IX
The enumeration in the Constitution, of certain rights, shall not be construed to deny or disparage others retained by the people.

Amendment X
The powers not delegated to the United States by the Constitution, nor prohibited by it to the States, are reserved to the States respectively, or to the people.

Ask yourself, would a Democrat/Progressive or Republican victory in November allow for these two amendments to have any weight? Or would our rights be further eroded and our freedoms further dismantled?

Well my prediction was wrong. Hopefully, Limbaugh's is right. At least we had a balanced budget and weren't in the hole under the last Clinton.

The reason many people think politics is trivial is often because pundits trivialize it. You're going to attack Biden's VP cred because he's had a hair transplant?!?

McCain had poor academic performance, and instead of attacking him for it, your response is that McCain never boasted of being the smartest guy in the class.

So when did Andre Carson brag about "being the smartest guy in the class" because you constantly talked about his poor academic record at the law enforcement academy?

Either academic achievement matters for elective office, or it doesn't. To use it selectively as you do makes the argument seem silly.

AI, I'm sure you know a lot of civic-minded and excellent lawyers whose law school grades were lousy. Sometimes grades indicate hard work and a sharp mind. And sometimes they're held by people I wouldn't let represent my dog in court.

But, to cut to the chase, find someone who says Joe Biden is not intelligent. Sorry, but anybody who sees him on Meet the Press knows he has a sharp mind.

ipopa, Are you attempting to compare McCain's academic standing at the U.S. Naval Academy with Andre Carson's at a police academy class? Surely you jest. Biden does indeed have a reputation for thinking he's the smartest guy in the room. Cilizza's reference of the increduluous comment Biden made to a person during his '88 campaign that his IQ was higher than his brings this point home. Can you recall another presidential candidate telling a voter that? Biden's hair transplants have been the butt of many jokes in D.C. As I said, like Obama, he's in love with himself. Biden will half-heartedly agree to that when he's questioned about it by reporters.

i just think it's a wonderful day in the neighborhood today. McCain looks so much better to this democrat this morning. Knowing that in their usual ability to see through the BS the american people can feel better about chosing McCain over "change we can believe in".

Actually AI, you are the one to make the comparison..how can you turn around and accuse IPOPA of making the comparison. Your statements re: class rank are wholly inconsistent.

Again, no issue discussion here. Just rehash of many things that have been discussed before about Joe Biden and more fine personal attacks.

Thousands of men have hair transplants every year. What McCain and the McCainiacs need to understand is that Joe Biden gives Barack Obama the bulldog he so desperately needs.

If all you have on Biden is rehash and insults than keep coming with it. I'm sure that Joe Biden is more than capable of giving it right back.

Also, if McCain or his supporters want to bring up the whole plagiarism thing that has been hashed and rehashed time and time again, then I'm sure that makes McCain's involvement in the Keating Five scandal fair game.