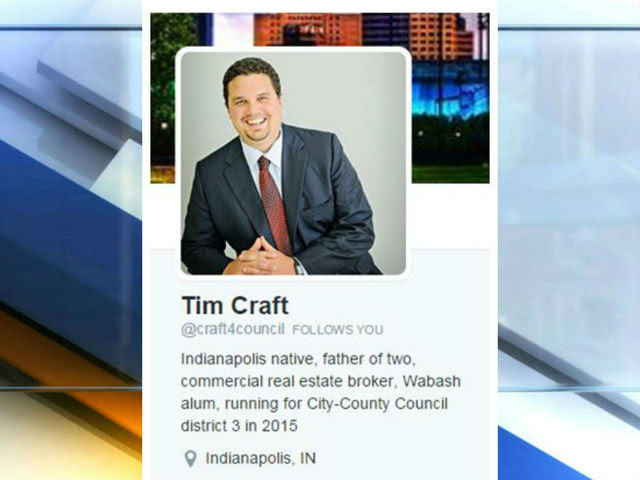 Advance Indiana reported a week ago that the Republican-slated candidate for the Indianapolis City-County Council in District 3, Tim Craft, practiced as a commercial real estate broker at CBRE from July 1, 2014 of last year until April 7 of this year, a little more than nine months, before he obtained a license as required by state law. Craft didn't bother to get a license until after Advance Indiana publicly called him out on it. A Call 6 investigation by WRTV's Kara Kenney confirms Advance Indiana's reporting:


A slated candidate for Indianapolis City-County Council is accused of claiming to be a licensed real estate broker when he was not licensed, Call 6 Investigator Kara Kenney reported.

“The agency did a lot of educational outreach to notify the industry,” said Goodwin. “In fact, we worked with the industry for a year and a half to let them know this was coming.”

Goodwin said PLA did not receive a license application from Tim Craft until Tuesday of this week, April 7.

That same day, the PLA approved his application and his Real Estate Broker license was issued.

As Advance Indiana earlier reported, Kenney confirms that Craft was first confronted about practicing as a broker without a license when he was interviewed by the Metropolitan Board of Realtor's ("MIBOR") candidate's committee. MIBOR's Lex Fay tells Kenney the organization raised concerns with Craft after he falsely represented himself as a licensed broker.


“He indicated he was a licensed broker in the state of Indiana and we wanted to do some checking to see if he was a MIBOR member or a member of the Commercial Board of Realtors,” said Lex Fay, political affairs liaison for MIBOR. “Through that process we found that in fact, it was not the case. We brought that matter to Tim's attention."

Craft's response to Kenney's findings was to attack incumbent Councilor Christine Scales and to continue lying about his own deception.


“This attack by my primary election opponent is intentionally misleading and blatantly motivated by politics. I am a licensed real estate broker in the State of Indiana. Prior to becoming a broker, I was a licensed Real Estate Sales Person in the State of Indiana. I completed the 24 hour Broker Transition Course and Exam required to become a Broker in early 2014. My opponent’s attack refers to a clerical issue in which the paperwork for my broker’s license was not properly processed. Immediately upon learning about this error, I proactively re-completed the coursework, testing, and application paperwork and was immediately confirmed as a Real Estate Broker for the State of Indiana. My opponent’s claim that this is anything more than a resolved clerical error is simply incorrect.”


This is clearly a desperate attack by a politician who knows she is likely to lose. Shenanigans like this, along with a general lack of trustworthiness, are why Scales was voted out of the Republican City-County Council caucus in the first place.

Criticism like this from a party leader who uses his position to funnel hundreds of thousands of dollars to his and his wife's bank accounts should be worn like a badge of honor. What does it say about a caucus that would not kick Lincoln Plowman out of the caucus after he was indicted by federal prosecutors for taking a bribe from an undercover FBI agent but boots Scales from the caucus because she puts the interests of her constituents and public integrity above corrupt, insider politics as usual?

I would encourage everyone to dig in to their pocket and give Scales some cash for her campaign.

I just sent her and Angela Mansfield money. Both being dissed by their party. Wonder if the D's and R's have a problem with women????

Could David Brooks and Bob Grand and those GOP skunks just like them have chosen a more worthless POS liar in their efforts to unseat the Honorable Christine Scales? It sure seems the Marion County Republican Central Committee (ever notice how "Soviet" that sounds?) didn't have to look very far to find a scoundrel cut from the same foul cloth as they.

This guy practiced his profession without a valid license. That has nothing to do with politics. Anyone experienced in their profession should know better. He's either a total idiot or he's a liar. Considering the scum bags running to his defense - my money is on both.

Face the Facts Tim you were operating in an unlicensed capacity. Pointing fingers at others just shows what a horses ass you really are.

Of course, by "trustworthy", they mean they couldn't trust her to vote for every way they came up with the screw the taxpayers and the city.

Gary, I doubt that Kyle Walker could possibly slink down any lower than the slime he already is. And thank you for calling out Kyle Walker and his darling wife Jennifer Hallowell (a woman who fully exercises her right to refuse to take or use Mr. Kyle Walker's last name). I wonder how many of the depleted "grass roots" Republicans understand what is meant when it is explained that Kyle Walker is a man "who uses his position to funnel hundreds of thousands of dollars to his and his wife's bank accounts ...".

I am a licensed real estate broker. I am not surprised that MIBOR and the Indiana Real Estate Commission again fail the metro area consumer when it comes to Tim Craft. The Commission and the Board are organizations which today are run overtly and covertly by "stacked" board/panel/committee members of the largest brokerage firms in the city.

Anyone who is or who was a member of the Board in recent years might also be tuckered out at the way the owner of the firm billing itself as "the largest independent real estate firm in Indiana"- an owner who has great longevity as a member of the IN RE Commission- for decades actively worked to stack Board/Committees/Panels with his sales people to help him get his way when he wanted. It was a ploy that has served him quite well.

I call on Kyle Walker to resign as he does not represent the ideals of the Republican party. If the CCB would allow it, all we need are backrooms and cigar smoke.

One of the Republican Mantra's has been Personal Responsibility. Tim Craft blames a clerical error. Ultimately it was Craft's Responsibility to have a proper license. Walker and Craft pulled out the adolescent excuses of take your choice - I did my home work but forgot to turn it in. 2.) The Dog Ate my Homework.

Doesn't one know wether or not they possess an active license while confirming the same through requirements of transactions?