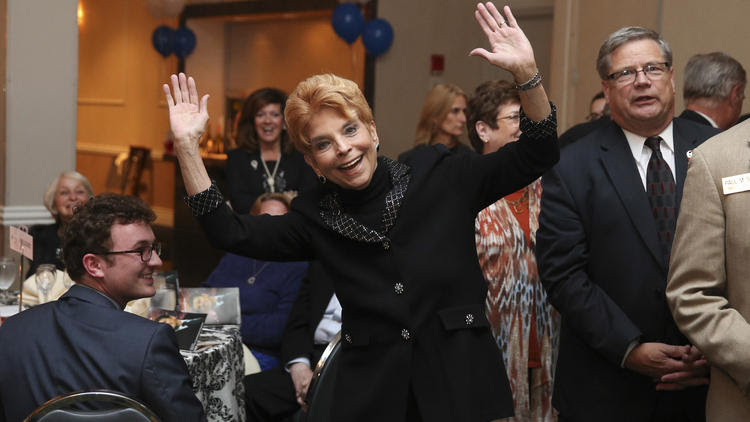 Incoming Republican Gov. Bruce Rauner will be the lone statewide Republican Illinois state officeholder when he takes office next month after the shocking death of a veteran statewide officeholder and former state lawmaker, Judy Baar Topinka. Topinka, 70, was admitted to the hospital in her hometown of Berwyn early yesterday morning after feeling discomfort. She suffered  a stroke shortly after tests were performed on her and died less than 24 hours after her admission to the hospital.

Topinka served three terms as Illinois' State Treasurer before losing the governor's race to Rod Blagoyevich in 2006. She was elected State Comptroller in 2010 and re-elected to another four year-term in November. Outgoing Democratic Gov. Pat Quinn will get to appoint her replacement, who will likely be a Democrat. He will likely appoint his Lt. Governor, Sheila Simon, who narrowly lost to Topinka in the November election. In January 2012, Illinois' only Republican U.S. Senator, Mark Kirk, suffered a stroke at age 53 that nearly claimed his life.  In 2010, Kirk narrowly defeated close Obama pal, Alexi Giannoulias, who succeeded Topinka as Illinois' Treasurer, before he suffered his stroke.

UPDATE: The succession issue may not be so clear cut. It doesn't seem disputed that Gov. Quinn can appoint someone to fill out the remainder of Topinka's term, but there seems to be an issue whether he can fill the vacancy for the four-year term to which she was just re-elected. There may be a legal argument that the vacancy for her new term should be filled by Governor-elect Rauner when he takes the oath of office next month. John Marshall Law School Professor Ann Lousin says this particular type of vacancy issue has not arisen before and is "more complicated than people think."
Posted by Gary R. Welsh at 8:32 AM

Strokes and not leukemia. Ponder it all.