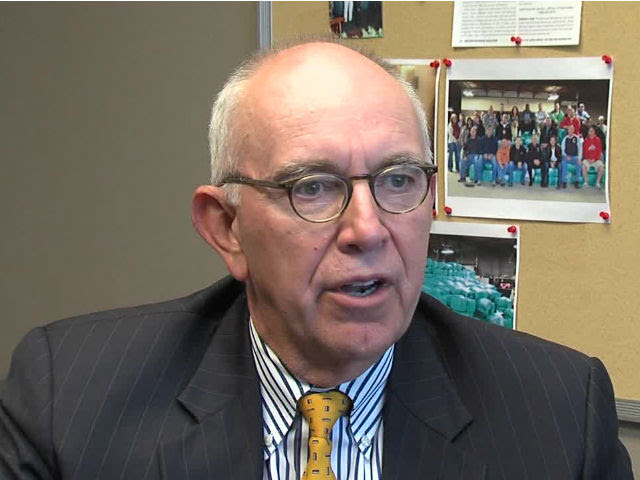 As incredulous as it sounds, Marion Co. Prosecutor Terry Curry is now saying his office may have misplaced the investigative file sent to his office by the state's Inspector General David Thomas regarding former Education Supt. Tony Bennett. Curry was caught with his pants down after he first claimed he never received an investigative file from Thomas' office last February with recommended criminal charges following Tom LoBianco's bombshell report earlier this week. Curry insisted his office only received the initial investigative file delivered to his office in November, 2013 from the Inspector General's office after it initially filed an ethics complaint against Bennett. Curry claimed that evidence didn't support the filing of criminal charges.

During a friendly interview with radio talk show host Amos Brown on WTLC-AM yesterday, Curry sought to shift blame to the inspector general statutory investigative process and the way investigations have been conducted by the office's first and only inspector general. Incredibly, Curry pretended his hands are tied to conduct investigations involving state employees who are being investigated for ethics charges by the inspector general's office until that office concludes an investigation, implying that his office has no independent authority under Indiana's constitution or statutes to conduct parallel criminal investigations through the grand jury process. After confronted with evidence his office signed for the investigative materials delivered to his office by the inspector general's office and exchanged e-mails with Thomas' office, he conceded mistakes may have been made by someone in his office. He maintained he personally was unaware the information had been sent to his office. Rather than searching his office for the misplaced documents, Curry indicated he was sending someone in his office to the U.S. Attorney's Office, which received the same information last February and similarly failed to act on Thomas' allegation that there may have been at least 100 instances of federal wire fraud violations.

The Journal-Gazette's Niki Kelly reports Thomas' office delivered 12 full binders of investigative materials to Curry's office last February. Thomas released two e-mail exchanges between his office and Curry's to prove delivery of the documents according to Kelly's report. The first e-mail dated February 27, 2014 advised an unidentified prosecutor's office employee the files were being delivered by a special agent in Thomas' office. A second e-mail from that employee acknowledged their receipt, saying “thank you for the delivery of the “present”!!!! I have the 11 - 12 Binders in my office. I will gladly share them w/ Prosecutor Curry.” In addition to the potential federal charges Thomas laid out to federal prosecutors last February, he also identified potential criminal law charges which could be brought against Bennett and his top staffers for ghost employment and official misconduct.

If you ever needed proof to substantiate my long-held view that there exists a conspiracy within the Indianapolis U.S. Attorney's Office and Marion Co. Prosecutor's Office to suppress investigation of public corruption, look no further. To think that extraordinary resources were used to charge and convict former Secretary of State Charlie White on trumped up charges of vote fraud and theft to drive him from office after former Gov. Mitch Daniels ordered a hit on him, while real, provable corruption involving one of the state's top Republican officeholders was swept under the rug by the state's top two prosecutors, both Democrats, one of whom was running for re-election and the other running for mayor of the state's largest city. There are many people within law enforcement who are well aware of how much corruption is covered up by these two offices. If you try to expose them, you will wind up broken and professionally destroyed like former ISP detective Ryan Harmon.

Let's see if anyone in the media in this state will hold the feet of Terry Curry and Joe Hogsett to the fire for sweeping this latest of many public corruption cases under the rug. Don't hold your breath waiting.
Posted by Gary R. Welsh at 7:53 AM

But, Gary, a cover-up doesn't make sense. What would Hogsett and/or Curry have to gain? To the contrary, pressing the investigation could benefit them politically. Until I see a benefit to either, the insinuations seem like paranoia.

I renew my call for Terry Curry to step down for violating the public trust of the citizens of Indianapolis. We now realize this has gone beyond incompetence.

For some reason, politicians running for high profile positions think it is bad to prosecute other politicians even of the other party. I heard that Hogsett refused to prosecute a big spending Mayor, even after FBI agents felt they had enough for an indictment.

John, It's the corrupt influence of the state's large law firms that block many of these cases from going forward. The lowly attorneys like myself have to sit back and watch as the legal system fawns all over the people at those big firms as supposedly doing great work for the people of the state when nothing could be further from the truth.

Can you explain the Ryan Harmon comment? I thought he was terminated for a hit and run in his police vehicle???

He was terminated because he supposedly bumped a motorcycle that tipped over while he was exiting a parking space and drove off. He said he was not aware his vehicle made contact with the motorcycle. That was only the beginning of what happened to him in his efforts to expose public corruption.

What's the real story behind Bill Mays' sudden, convenient death? Bet ya LJ and others are breathing a sigh of relief.

Curry's comments are laughable in the extreme and insults the intelligence of anyone other than a Zombie. This was a high profile case, and how often does someone deliver 12 binders to Curry's Office. Somehow through a strange coincidence - Smoking Joe Hogsett took no action either.

Seems like our City Government has a problem with "losing" files. I believe some ROC Files are missing action also.

Don't forget, Flogger, that Curry concluded the destruction of all of those ROC documents did not constitute a crime even though a criminal statute says otherwise.

"The buck never got here."

Click link:"Nothing to see here..." -The ROC document shredding, the "overlooking" of an important public corruption file, now just don't any of you Marion County residents worry about that. You just don't understand....it wasn't illegal (although the law says otherwise), and those files "never got here."

LamLaw here is the connection you have been looking for! A representative from Bennett's office was present in the Superintendent of School's office the day Ryan Harmon told school officials that a female high school student was being sexually abused by two Martinsville High School coaches. Bennett's office was fully aware of the sex scandal and did NOTHING, while the abuse continued for 277 more days. Now here is the connection! When bogus charges were filed against Harmon of false informing, his family went to the U.S. Attorney's office with all of the court documents hoping to get justice for Harmon. In fact, they made four trips to Hogsett's office to deliver documents and call for justice for their son. They also made a trip to the FBI office in Indianapolis. Waiting patiently for justice to come for their son from the U.S. Attorney's office to no avail. It wasn't until the family made the connection that they realized how deep the corruption went here in Indiana. The law firm that represented the Martinsville School Corporation during the sex scandal and presumably did an investigation of the coaches was Susan Traynor Chastain, Bose, McKinney, Evans. The law firm that represented the school officials when Harmon took the depositions in his case to prove his innocence on the false informing charges was Michelle Cooper, Boise McKinney, Evans. Who did Hogsett go to work for when he left the U.S. Attorney's office? You got it! Bose, McKinney, Evans. Harmon is still waiting for JUSTICE, but I guess political aspirations trump justice!

"Misplaced" has a lost email sound to it.

Tom Lobianco is very lazy, as the star will find out. He doesn't do investigations. He depends on his friends in the Ritz office for everything.