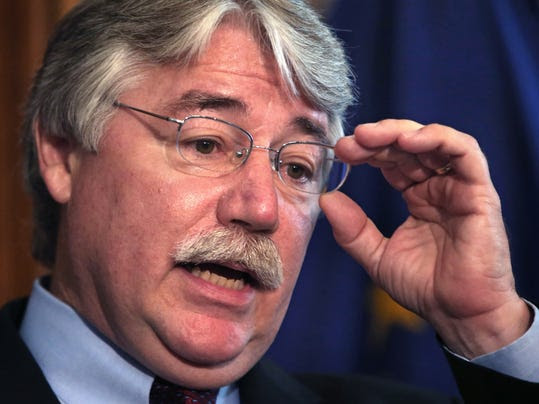 Attorney General Greg Zoeller told reporters today he declined to represent the state of Indiana in a lawsuit being initiated by Texas challenging the Obama administration's decision to grant deferred action status to millions of undocumented aliens and joined in by 16 other states. Instead, Gov. Pence will outsource the state's representation in the matter to the law firm of Barnes & Thornburg at considerable cost to the state's taxpayers.

Zoeller's decision not to pursue the case is based on his belief the states might not have standing to bring the case. "Most of us might disagree as to whether states have standing or not," Zoeller said in a call with reporters about a letter he and other attorneys general signed urging Congress to overhaul immigration laws. "It's probably a tough question that is best left for the court." Zoeller prefers the state encourage Congress to make changes in the nation's immigration laws instead. "If my office is going to be involved with the other attorneys general in our consistent call for congressional action, I think it can be somewhat distracting to be on this other litigation," Zoeller said. "The governor can handle that part of it and I'll continue to call on Congress to do their job."

Zoeller's position on the immigration issue is a sharp diversion from the position he has taken in the same-sex marriage debate. Despite the Supreme Court's 2013 ruling in U.S. v. Windsor paving the way for the overturning of state laws barring the legal recognition of same-sex marriages, Zoeller has intervened in lawsuits all over the country as an amicus party urging lower courts to uphold state marriage discrimination laws. According to the Indiana Law Blog, Zoeller's office filed 142 amicus briefs in cases throughout the nation since he took office in 2009. The Indiana Law Blog notes Zoeller, who is not a constitutional officeholder, acted on his own in those cases without direction from the governor, who has the final say as the state's chief executive officer. Zoeller claims he pursued the same-sex cases as our state government's voice because of his duty to defend laws passed by the state legislature in the face of Supreme Court precedent to the contrary. Yet he refused to defend a state law in the federal courts passed by the legislature affecting undocumented aliens because he viewed the law as being unconstitutional.

Zoeller clarified that he was not criticizing Gov. Pence's decision to challenge the Obama administration's constitutional authority to grant deferred action to millions of otherwise deportable undocumented aliens, a move which he agrees may in fact be unconstitutional. He just doesn't believe the states have standing to challenge the federal executive action. He cites a 2012 case in which a district court in Mississippi ruled that state lacked standing to contest the administration's previous deferred action grant for millions of undocumented aliens who arrived in this country prior to their 16th birthday, remained continuously in the country, had obtained an education in this country or were currently enrolled in school and were able to pass background checks. Regardless of whether you agree or disagree with Zoeller's decision, it cannot be disputed that his legal reasoning in deciding which cases his office will pursue is not being uniformly applied. It seems to have more to do with his personal preferences.
Posted by Gary R. Welsh at 11:48 PM

The state capitol, a dupli-city?

classic action against Gov for not approving funds to fund is agenda..