$18 Million For Flaherty & Collins, Not One Penny For Public Safety 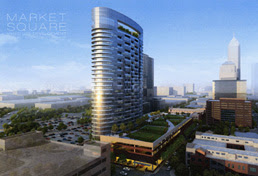 Indianapolis taxpayers will contribute $18 million plus a prime piece of real estate at the former Market Square Arena site downtown to the politically-connected Flaherty & Collins firm to develop a 28-story, $81 million luxury apartment building that will feature 300 apartments, a 500-parking space garage and 43,600 square feet of ground level retail space. The City is broke and has no money to pay for basic city services, but there continues to be an endless supply of cash to fund the private real estate development projects of the pay-to-play fat cats stuffing money in the politicians' pockets. This is one of  several multi-million dollar subsidies the Ballard administration has offered to Flaherty & Collins for its private development projects downtown. Mayor Greg Ballard recently vetoed a plan to spend $6 million in ReBuild Indy funds to field a new class of police recruits. Instead, he said the money was needed to build a new sports facility on the eastside where cricket could be played. There are now fewer police on the streets than the day he took office despite having the benefit of a 65% increase in the local income tax to spend on public safety. The Mayor is now telling Indianapolis residents that they'll have to pay higher taxes if they want more money to be spent on public safety.


For the sake of drama Tuesday morning, Mayor Greg Ballard and a few other key players in the Market Square redevelopment effort pulled down a large black drape and exposed the rendering of a 28-story glass tower that will finally bring the MSA site back to life.

As is customary, several “oohs” came from the gathered crowd of dignitaries, who stood in the blistering sun to learn what would replace the former basketball arena and concert hall. Twelve years have passed since the arena came crashing down in a spectacular implosion, and many proposals and suggestions have emerged since then without one pound of concrete being poured.

Now, though, it looks certain that the northern part of the arena site will give way to one of the biggest development projects Downtown has seen in decades — a rounded tower fit for 300 high-end apartments adjoining a first-floor retail space. What is now a depressing parking lot will give way to hundreds of residents paying millions of dollars in taxes and adding to the residential density that has boosted Downtown in recent years . . .

I know, I know, it’s just a building. And, yes, the city is investing in the project, a fact that will annoy some. But given the challenges facing American cities in 2013, given the competition from the suburbs and the long economic downturn that has made it so hard to push big projects forward, it was remarkable to see a few dozen people sweating in the morning sun and learning about the new high rise, one roughly the height of the City-County Building, that is on the way.

What a poor excuse for a political columnist. As George Orwell once said, "Journalism is reporting what someone else does not want printed: everything else is public relations."
Posted by Gary R. Welsh at 10:04 AM

Have to get all their pachyderm payola in before it changes back to the other side.

This development, like so many, envision "luxury apartments" where wealthy Hoosiers can employ maids, cleaning services, and many other low income jobs. If we spent the money on police, how many of them would hire maids? Luxury Apartments are much better then police recruits at expanding the pool of part time, no benefit, minimum wage jobs that Indy so desires.

It's such a great idea that the developers won't touch it without $18.5 Million in welfare payments stolen from taxpayers.

After giving away everything they can to the downtown elites our fearless leaders will again start to weep and moan that they must do something to support public safety. Cue the ominous music, here comes another tax hike for public safety.

Tully, rhymes with dully. he's about as interesting as a third rate Tom Friedman and Friedman is as pedestrian as they come.

As is customary, several “oohs” came from the gathered crowd of dignitaries"

Is it too much to ask Tully to name the "dignitaries." Perhaps their names are a NSA Secret.

The Article should have had a huge label ADVERTISEMENT. It should have carried some type of warning that the Star never publishes and never will publish a list of all the subsidies direct and indirect that have been handed out within a radius of one mile of the down town monument.

Just one more example of downtown Corporate Welfare. I wonder how adding all this retail plays with Circle Center Mall or the other retail outlets.

You actually need people that earn a good income to support all of this retail, etc. Are these people really going to move downtown with all the issues there???