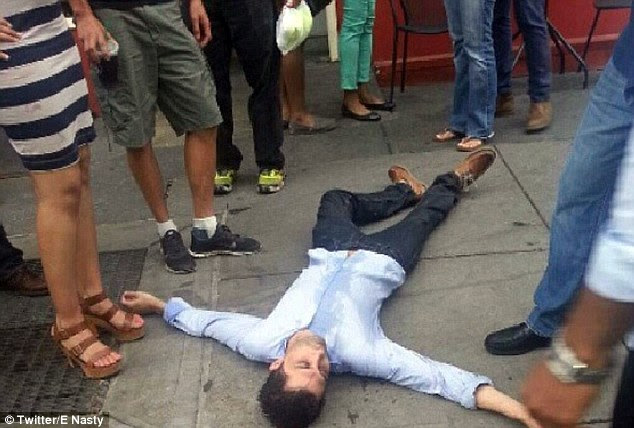 As jurors continue their second day of deliberations in the Sanford, Florida murder trial of George Zimmerman, there's a story grabbing headlines out of New York about a young white man suffering a skull fracture after being struck by a 25-year old black man and falling to the sidewalk and hitting his head on the concrete. The Daily Mail reports that the white victim, who is now in critical condition at Beth Israel Medical Center, stumbled into a table where Dennis Reddish and his girlfriend were dining outside a restaurant in the West Village and began spewing racial epithets. Reddish rose and struck the man in the face, knocking him unconscious as he struck the sidewalk. Reddish attempted to strike the fallen man a second time when he was restrained by restaurant staff. When Reddish saw blood flowing from the man's cracked skull, he fled on foot, leaving without his girlfriend. According to the Daily Mail, police captured Reddish a few block away and charged him with assault.

The victim's name has not been released. Witnesses told the New York Daily News that the victim stumbled into the couple's table when he reportedly made racially charged statements to them. "You n_ _ _ _ _ _ are why I lost my job," the Daily News reported. Other reports quoted witnesses as hearing the victim say, "This n_ _ _ _ _ wants to fight me!" "In response, police say the 25-year old diner punched the insolent man in the face, causing him to fall backwards and hit his head on the concrete curb." One of the restaurant employees told reporters the man was out cold and he thought he was dead. The New York Post claims Reddish was attempting to aid the man who stumbled into his table in a drunken state when he spewed the racial epithets, leading Redding to strike him with his fist. The Post said a witness who spoke to the man shortly before the incident said he was upset about his wife leaving him and losing his job at Goldman Sachs. “I felt so bad,” she said. “He could hardly walk.”

The timing of this story is one of those things that make you go hmmm. Prosecutors in the racially-charged George Zimmerman trial have urged jurors to find him guilty of second degree murder after the neighborhood crime watch captain fatally shot a 17-year old black male, Trayvon Martin, during an altercation in which Zimmerman claims Martin struck him, knocking him to the ground. Zimmerman claims he shot Martin in self defense after he straddled him and began punching him and slamming his head against the concrete sidewalk. Zimmerman claimed that Martin told him he was going to die tonight before he fired the gun at him that he had holstered to his waist.
Posted by Gary R. Welsh at 6:24 PM