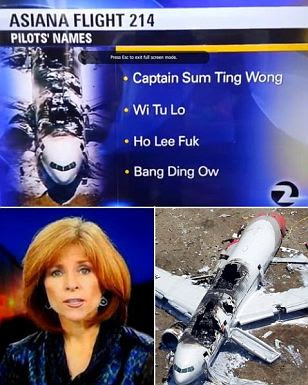 The National Traffic Safety Board was forced to make an embarrassing apology yesterday when it confirmed that an intern working for the agency had confirmed false names of the flight crew members of Asiana Flight 214, which crashed during a landing last weekend at San Francisco Airport that killed three passengers and injured more than 180 of the 291 passenger aboard. According to CNN, Oakland's KTVU broadcast the bogus names during its noon broadcast yesterday, which phonetically spelled out the words, "Something wrong", "We too low," Holy Fuck" and "Bang Ding Ow." "Earlier today, in response to an inquiry from a media outlet, a summer intern acted outside the scope of his authority when he erroneously confirmed the names of the flight crew on the aircraft," the NTSB said in a statement. It was unclear who made up the names and provided them to KTVU. The agency claimed the intern had been provided the list of names by the TV station and merely confirmed them. Asiana Airlines identified the pilot flying the Boeing 777 that crashed at San Francisco International Airport as Lee Kang-Kuk. No, this wasn't an SNL spoof. It really happened.

Yes but who gave the names to the 'news outlet' in the first place?

...and in a related story: KTVU will be airing it's own version of "Weekend Update" opposite Saturday Night Live. The millions of views of this pilot episode will likely make it the #1 in it's region for that time slot.

Sorry, but I laughed my a** off over this.