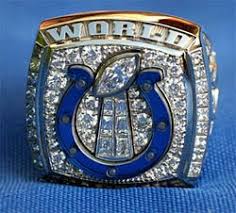 I was just taking a gander at the statement of economic interest Mayor Greg Ballard filed earlier this month for the 2012 calendar year. He discloses receiving just two specific gifts: a watch with a Marine logo given to him by Steve and Kathy Brown on August 9, 2012 worth an undisclosed value; and a Super Bowl ring given to him by the Indianapolis Colts on October 18, 2012 with a listed of value of only $400.00. According to Wikipedia, the NFL purchases the gold and diamond rings for the winning team each year for about $5,000 a piece.  Assuming it's a genuine Super Bowl ring, its resale value would be considerably higher than the original purchase price. I'm assuming Jimmy "The Pill Popper" Irsay gave Ballard a genuine Super Bowl ring.

In addition to the free tickets he gets to all the home games of the Pacers and the Colts, Ballard disclosed receiving two Pacers tickets from IPL valued at $1,824.00. Ballard also accepts free country club memberships conservatively worth tens of thousands of dollars. He and his wife have taken at least eight overseas junkets paid by Develop Indy with money raised from pay-to-play contractors who have won public contracts or received tax and cash economic development incentives from the city worth tens of millions of dollars. I would value the cost of those trips for him and Winnie well in excess of $50,000. In other words, the kickbacks Greg Ballard gets from the pay-to-play pals and the billionaire sports team owners he helps with our tax dollars are far in excess of what Reginald Walton or John Hawkins allegedly received in the kickback scheme they were running in the city's Land Bank office. Just keeping it all in perspective. Perhaps Walton and Hawkins were only emulating the man in charge on the 25th floor.

Thanks Gary. I actually looked at the may-yah's disclosure today. I had no idea that $400 was 'an error'. Thanks also for putting a dollar value on the massive list of other gifts.

I did notice that the free travel and attendent food, drink, and entertainment, was not mentioned. I have to question whether the Mayor's implementation of so-called high ethical standards is also 'an error'.

Some of us enjoy watching Pawn Stars. We have a slight clue how to value such things. Somebody probably told him he would have to fill out a gift tax return if he put the actual value of the ring down. This guy pockets more in freebies a year than he receives in salary from the taxpayers.

Pat, Did you catch that the footnote on the mayor's statement for the Pacers tickets from IPL saying that he had not disclosed that gift on the statements he filed in 2011 and 2012 because he did not know the value of the tickets? Apparently he's become so used to getting free tickets to events he doesn't even notice the price written on the face of them.

History is not going to look kindly on the ethics of the Ballard administration.

He should have been on this Land Bank scandal - http://www.kubepharm.com/indylandbank/IndyLandBank.html

Who says he wasn't? The investigation is still ongoing. There could still be more indictments.