It is now abundantly clear that rogue federal agents are engaged in a massive cover up of their false flag attack at the Boston Marathon last month when two Chechen immigrants were framed for an event planned and staged by rogue agents within our own government as a further excuse for perpetuating the endless war on terror that has bankrupted the country and stripped Americans of basic civil liberties. It now turns out that the friend of the dead Boston bombing suspect Tamerlan Tsarnaev was not armed as originally claimed by federal law enforcements when an FBI agent fatally shot him.

Law enforcement officials originally claimed that Ibragim Todashev was being interrogated by the FBI agent in the presence of several other law enforcement officials in his Orlando apartment and was starting to write out a confession to his alleged role in an unsolved triple homicide in Boston that law enforcement officials are now trying to claim he carried out with Tamerlan Tsarnaev on September 11, 2011. According to the initial reports, Todashev allegedly lunged at the agent with a knife as he was writing out his confession following hours of questioning. Law enforcement officials now admit there was no knife. The story now being told to the media by law enforcement sources is that Todashev became angry and overturned a table. The agent, feeling threatened, responded by firing seven shots at him from his handgun, including one bullet to the back of his head. From the Washington Post:

An air of mystery has surrounded the FBI shooting of Ibragim Todashev, 27, since it occurred in Todashev’s apartment early on the morning of May 22. The FBI said in a news release that day that Todashev, a former Boston resident who knew bombing suspect Tamerlan Tsarnaev, was killed during an interview with several law enforcement officers. 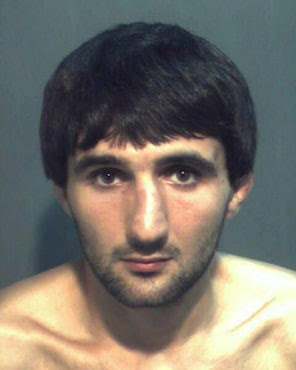 The FBI has provided few other details, saying that the matter is being investigated by an FBI review team that may not finish its probe for several months.

“The FBI takes very seriously any shooting incidents involving our agents and as such we have an effective, time-tested process for addressing them internally,” FBI spokesman Paul Bresson said in a statement Wednesday. “The review process is thorough and objective and conducted as expeditiously as possible under the circumstances.” . . .

Initial reports citing anonymous law-enforcement individuals provided conflicting accounts of what happened. Some law enforcement officials said Todashev wielded a knife and others suggested that he attempted to grab the FBI agent’s gun.

One law enforcement official, speaking on the condition of anonymity to discuss an ongoing investigation, said Wednesday that Todashev lunged at the agent and overturned a table. But the official said Todashev did not have a gun or a knife. A second official also said Todashev was unarmed.

An official said that according to one account of the shooting, the other law enforcement officials had just stepped out of the room, leaving the FBI agent alone with Todashev, when the confrontation occurred.

The shooting followed hours of questioning by the law enforcement officials that had begun the night before.

Todashev’s father said after the shooting that he didn’t believe the FBI’s account of why they killed his son.

“My son could never commit a crime, I know my son too well,” Abdul-Baki Todashev, who lives in Chechnya, told the Daily Beast Web site. “He worked helping disabled people in America and did sports, coached other sportsmen. The FBI made up their accusations.”

Separately, the Orlando-Sentinel is reporting that Todashev's widow, Reniya Manukyan, told reporters that FBI agents had been badgering her husband and her since the Boston bombings last month about their relationship to Tamerlan. Todashev met Tamerlan when he lived in Boston several years earlier through the tight knit Chechen community and both shared an interest in martial arts. Manukyan insists her husband would have never confessed to the 2011 triple homicide in Boston because of records she says that prove he was in Atlanta with her at that time. Todashev had undergone surgery on his knee to repair damage to a tendon a few days before the Boston bombings and was still recovering from that surgery when he was shot and killed by the FBI agent on May 22. At a press conference today, an attorney for Todashev's widow offered photo evidence of the extent of the injuries sustained by Todashev, which were taken of his body at a local funeral home following the shooting death. A family friend who took the photos claimed they showed at least a dozen wounds, although some may have been exit wounds from the multiple gunshots. A civil rights group is calling for a Justice Department investigation into the shooting.

Recall the shootout in Watertown with the two Boston suspects. Law enforcement reports of the events of that 24-hour period have been riddled with contradictory statements. Eyewitness accounts and video footage showed Tamerlan being taken into police custody alive the night of the shootout during which one police officer was shot. Yet police later claimed he was shot by police and then run over and killed by his brother while fleeing the scene in a stolen Mercedes SUV. Initial accounts claimed both brothers were firing at police and throwing bombs at them, but witnesses claimed they only heard gunshots and only one gun was recovered near Tamerlan's body. Later, we learned that the police officer who was shot had been hit by friendly fire, not by a gun fired by either of the suspects. The Tsarnaev brothers can be clearly heard on audio of an amateur video taken during the shootout yelling "we didn't do it" and "we give up."

After a massive manhunt for the next 24 hours during which the entire Boston area was placed under martial law and homes within a several block area were stormed and searched by heavily armed law enforcement officials without warrants failed to turn up the missing younger brother, Dzhokhar, police lifted the martial law order and a homeowner quickly discovered Dzhokhar hiding in a boat in his backyard. A massive team of police converged on the scene. Police claimed the suspect had fired upon them, causing them to fire dozens of shots into the boat and using flash bangs to coax a severely injured Dzhokhar from the boat. Later we learned that the suspect was unarmed, leading to questions about why so many shots were fired into the boat at him if he never fired a shot at police as earlier claimed.

Alternative news sources revealed after the suspects were identified by federal law enforcement officials their family's ties to the CIA despite initial claims by federal law enforcement agents that they knew nothing about the suspects prior to the bombings. The Tsarnaev's uncle, Ruslan Tsarni, turns out to be a former son-in-law of a former high-ranking CIA official, Graham Fuller, who is credited with writing the original action plan for Iran-Contra. Tsarni actually lived in Fuller's home in Rockville, Maryland for more than a year and had been instrumental in setting up an NGO to help fund radical Islamist rebels in Chechnya. Tsarni had also been employed by USAID, a CIA cut out agency, as well as working for a string of energy companies tied to Haliburton. It also turns out that Russian authorities had warned both the FBI and the CIA of its concerns of Tamerlan's activities long before the Boston bombings occurred. The Tsarnaev brothers' parents and aunt insist they were framed by the U.S. government. After their mother called out the FBI for its role in handling her sons over a several year period, the agency admitted it had interviewed the older brother on several occasions prior to the bombings but determined he posed no threat and closed the file on him. Supporters who believe in the Tsarnaev brothers' innocence have made this video as a tribute to them. Here's a couple more videos you weren't suppose to see. The first one shows when police first took Tamerlan into custody. A neighbor tells the police he doesn't recognize him so he presumably doesn't live in the neighborhood. Police begin searching the area for bombs. Near the end of the video, you will hear Tamerlan yell out his younger brother's name. The second video has extended footage taken by the same area resident with commentary added. You will see when police first approach Tamerlan and when they walk away with him while he is still fully clothed.
Posted by Gary R. Welsh at 10:05 PM