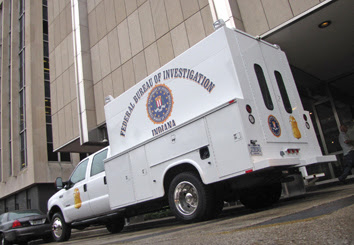 UPDATED-FIVE CHARGED It looks like the shady dealings of Mayor Greg Ballard's administration are finally coming home to roost. The IBJ's Cory Schouten last year reported on some very questionable dealings by Indianapolis' Land Bank concerning the disposal of abandoned homes taken over by the city. His reporting has apparently culminated in a federal investigation that prompted a raid of the Land Bank's offices at the City-County Building today and the arrest of multiple persons, including the man in charge of that office, Reggie Walton. Schouten reports on today's developments:


FBI agents on Tuesday morning conducted a warrant search at the Department of Metropolitan Development in the City-County Building, shortly after agents arrested multiple people, including city employees at their homes.

The moves are the culmination of a months-long federal investigation into alleged corrupt practices at the Indy Land Bank, a municipal agency that handles the disposition of vacant and tax-delinquent homes that fall into city hands, sources told IBJ.

A grand jury indictment is expected to describe evidence of secret kickbacks to city officials who orchestrated the sale of city-owned properties to at least one not-for-profit organization. Those arrested were scheduled to make initial appearances in federal court Tuesday afternoon. U.S. Attorney Joe Hogsett is expected to announce the charges at a press conference at 1:30 p.m.

An FBI tactical vehicle was parked outside the north entrance to the City-County Building as of 9 a.m.

One of those arrested Tuesday was Reggie Walton, the Land Bank director. It was not yet clear what charges Walton is facing. The identity of the other suspects also was unclear. The FBI search warrant centered on Walton's office on the 20th floor of the City-County Building.

Walton was prominently featured in an IBJ investigative story in November 2012 that raised questions about the city's sale of taxpayer-owned properties to not-for-profit groups eager to exploit a loophole allowing low-priced sales without public bids.

I warned my fellow Republicans that they would rue the day they pushed to give the administration of Greg Ballard near-dictatorial control over city-county government through the enactment of SB 621. I told you there were sweeping indictments to come. Now let's watch them run for cover as the dominos start falling.

UPDATED: The IBJ is now reporting that five persons have been indicted in a kickback scheme involving at least two city employees. The suspects have already made their first appearance in court according to the IBJ. Here are the details on those charged with wire fraud and bribery:


Federal prosecutors have charged two city employees in the Department of Metropolitan Development and three others in a scheme involving cash kickbacks on the sale of properties in the Indy Land Bank.

The indictment, which includes eight wire fraud and bribery counts, alleges city employees Reginald Walton, 29, the Land Bank's director, and John Hawkins, 27, a senior project manager for the DMD and a former special assistant to Mayor Greg Ballard, participated in the scheme.

The five defendants each are facing three wire fraud charges. Each carries a potential penalty of 20 years in prison and a $1 million fine.

Walton also is charged with three counts of bribery on an organization that receives federal funds, each of which could carry a maximum penalty of 10 years in prison and a $250,000 fine. Sargent and Reed are facing one count each of bribery.

The suspects made their first appearance in federal court midday Tuesday, where U.S. Magistrate Judge Denise K. LaRue read them the charges and explained their rights. They defendants were released pending trial.

On a personal note, in the course of representing the estate seeking to sell a home on the city's eastside that was subject to code enforcement last fall, I had a conversation with Reggie Walton about potential buyers for a troubled residential property owned by the estate since he was in charge of the city's land bank program. During that conversation, Mr. Walton suggested two potential buyers. One of them was the Indiana Minority AIDS Coalition, whose executive director was indicted today. The other was Naptown Housing. I just heard Joe Hogsett's press conference live. He says Walton owned an undisclosed interest in Naptown Housing. Interesting. Fortunately, my client found another buyer for the property.

I suspect now that the net has been cast some of the little fishes will try to escape. No one will want to take the full hit. Remember Watergate started out with a break-in and with persistence by the Press and Judicial system the trail led back to the President.

I suppose the big fish will have a plausible denial excuse. We will hear about a few "bad apples." Hopefully, the Judicial system and Press will not shy away from exposing all the rot.