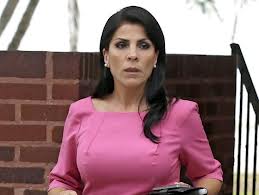 Kim Kardashian was the first person who came to mind when media reports on the woman whose complaint about harassing e-mails from Gen. David Petraeus' mistress, Paula Broadwell, first emerged. The Chicago Tribune takes a closer look at Jill Kelley's life today and the description an acquaintance provides of her is the Tampa Kardashian:


Kelley, the wife of a cancer surgeon, has a thin resume, a troubled family, shaky finances and a reputation for being, as one acquaintance here put it, "Tampa Kardashian." Now she is central to an unfolding scandal that has forced out David H. Petraeus as CIA director, threatens the career of Marine Gen. John Allen, commander of U.S. and international forces in Afghanistan , and cast previously unknown figures and a sex affair into international notoriety . . .

Life here was a step up for Jill Kelley. Born in Beirut, she moved in the mid-1970s with her family to northeast Philadelphia, where they were the "oddballs" in a mostly Irish and German neighborhood, said Kelley's brother, David Khawam. The family opened restaurants in the area, he told reporters.

Scott and Jill Kelley moved to Tampa about a decade ago when Scott, who specializes in surgery for esophageal cancer, was hired by a local hospital. In June 2004, they purchased a 5,500-square-foot red-brick home on Bayshore Boulevard in the city's ritziest neighborhood.

With her dark tresses, high-wattage smile and gregarious personality, Kelley was a natural hostess. She became known for holding Champagne-and-caviar parties on a manicured front lawn, complete with billowing white tents and valet parking. Civic leaders rubbed shoulders with military brass from MacDill, a base so crucial to the local economy that generals were treated like rock stars . . .

The Tribune discusses a now-defunct cancer charity the couple started that appeared to benefit them more than cancer victims. The couple's venture into real estate investing fared no better with their holding falling into foreclosure, including their million-dollar home where they entertain a lot. In case you were wondering why Gen. Petraeus and his wife were wearing Mardis Gras beads in a now famous photo taken with the couple, the Tribune explains that party at the Kelley's home. "In February 2010, Petraeus and his wife, Holly, attended their first Gasparilla Pirate Festival, a local version of Mardi Gras. He arrived at the Kelley home with a 28-motorcycle police escort and wore a long string of beads around his neck."

The Tribune says Kelley was busy socializing and trying to line up business deals during this summer's Republican National Convention in Tampa with a New York energy entrepreneur. He cut his ties to her when she demanded an $80 million fee to help broker a South Korean coal project based on her honorary title as South Korea's consul, a role bestowed upon her by her good friend Gen. Petraeus. I'm wondering which prominent Republicans Jill Kelley will come back to haunt. I'm sure its safely stored away in David Axelrod's files for use at the appropriate time.
Posted by Gary R. Welsh at 7:38 AM

Honorary consul status is conferred by a nation and confirmed by the State Department.

Is she really an honorary consul of South Korea, or does she just play one in Tampa?

She has a Florida-issued license plate that claims she holds the title. I'm having difficulty with the idea that a Lebanese immigrant to this country living as a housewife in Tampa would be serving in that capacity for South Korea. Those titles are typically conferred on prominent U.S. citizens with some ties to the country in question.

So, you haven't found any evidence that she actually holds Honorary Consul status.

What does the South Korean embassy in Washington have to say about it?

Not possible. According to the State Department (http://www.state.gov/ofm/ro/ho/plates/), only Texas, Louisiana and Colorado provide special plates for honorary consuls.

The State Department maintains the list of foreign consuls, and Ms. Kelley is not on it. Korea's honorary consul for Florida since 1999 is Burton Landy (http://www.state.gov/documents/organization/188594.pdf).

So, your source for her honorary consul status is just plain wrong.

I don't know what the hell you're talking about. There are numerous stories discussing it.

An avalanche of reporting over the past week revealed that Kelley is an honorary consul for the South Korean government, a role she obtained in August, according to CNN. It turns out, Kelley shares the title of honorary consul with some Tampa business heavyweights.

Kelley’s honorary consul status is emblazoned in a special license plate on her Mercedes S500 sedan and been mocked in her widely circulated 911 call claiming “inviolability.”

But Kelley isn’t the only honorary consul in Tampa Bay.

Turns out more than a dozen people have similar roles in promoting international relations and economic development with foreign countries, according to a “Tampa Bay Consular Corps” list on the Greater Tampa Association of Realtors’ website.

The list, which appears to be a year or two old, does not include Kelley.

Arthur R. Savage holds the title for Denmark and Norway and the dean of the Consular Corps. He could not be reach late Thursday.

Businessman David A. Straz Jr. is honorary consul for the Republic of Liberia. He referred questions to Savage.

Jose Vivero, chairman and CEO of Century Bank of Florida, is on the list as an honorary consul for Spain. Al Karnavicius, president of Bayprint in St. Petersburg, is honorary counsul of the Republic of Lithuania.

A South Korean spokesman told CNN his government is monitoring the situation with Kelley.

Savage is indeed honorary consul for Denmark in Tampa. Didn't bother to look up the others.