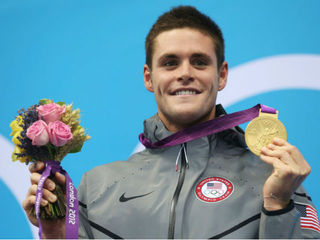 All the haters on the Left are taking after the pride of Indiana from this past year's Olympic games in London. David Boudia, who won a gold medal in diving, is coming under fire for comments he tweeted critical of targeting the wealthy for higher taxes as President Obama called for during his first comments to reporters yesterday following his re-election last week. "Targeting the wealthy for tax raises is like telling Rosa Park to move to the back of the bus," Boudia tweeted earlier today. WRTV reports on the heated reaction to Boudia's Twitter comment:

Boudia, 23, who lives in Noblesville, tweeted, "Targeting the wealthy for tax raises is like telling Rosa Park (sic) to move to the back of the bus #hardworkingcitzens."

"I'm sorry you feel (that) way. I used to respect you. You just lost a follower," tweeted L. Cohen from Indianapolis.

"No it's not! There's hard working ppl who are living on the poverty line due to crippling taxes and wealthy ppl who pay the same," AislingC tweeted.

"It's hard work for a millionaire hedge fund manager to sit at a computer all day moving money from one account to another?" Dawn9476 tweeted.

Boudia's comments may not be the most artful way of making his point, but there is a lot of truth in what he's saying. President Obama and the Democratic Party have waged an endless war on wealthy Americans accusing them of not paying their fair share of taxes, but statistically speaking, that claim is without merit. Wealthier Americans over time have been paying a larger share of the income taxes paid to the federal government. In 1999, the top 10% of income earners paid about 2/3 of the total federal income taxes, while the bottom 50% paid about 4%. By 2009, the share paid by the top 10% grew to more than 70%, while the share paid by the bottom 50% dropped to 2.25%. Almost 46% of American wage earners pay no income taxes to the federal government. In the context of the federal income tax, there is a legitimate reason to question why higher wage earners should bear an even larger burden of the taxes.

Income taxes should not be confused with federal payroll taxes, the rate of which falls as income rises; however, those taxes are dedicated to cover the cost of Social Security retirement, survivors, disability and Medicare benefits that are paid out to Americans of all income groups. The top 1% pay an effective rate of 1.9% on payroll taxes compared to the 7% rate paid by the lowest income earners because payroll taxes are currently capped on earnings up to about $107,000. The lowest retirees, however, receive nearly 90% of their income from Social Security earnings, while the wealthiest Americans receive only 17% of their income from Social Security. A legitimate debate could be had over whether we should means test these benefits so that people who really don't need Social Security as a supplemental retirement income should receive as much as those who rely more heavily on it for their subsistence.

Aside from federal taxes, everyone regardless of income pays a panoply of income, sales, gas and other excise taxes collected by state and local governments, often at the same rate regardless of income, to cover the costs of services and programs funded by the states and local governments. Property taxes are also paid on the value of our homes and real estate without regard to the amount of income we earn, but those taxes are also used exclusively to fund services not provided by the federal government. Wealthy income earners should pay their fair share of taxes, but let's not lose sight of the fact that our country was built on encouraging, not condemning the creation of wealth by the private sector.

UPDATE: Boudia tells the Star he thinks his comment has been misunderstood.


"Obviously, taxes and Rosa Parks and racial equality aren't related," Boudia said. "I was saying based on equality."

Boudia said Rosa Parks had every right to have a seat on the bus all those years ago, just as the wealthy have a right to be taxed equally and not more than others.

"I'm not saying poor people don't work hard," he said, referring to accusations that he doesn't care about those toeing the poverty line. "But just because (people are) rich and wealthy and they can afford to be taxed doesn't mean they should be taxed more."

Boudia said he believes in what he said and was ready to defend it when he tweeted it.

"When you have a personal account and you say things on social media, you put yourself out there," he said. "There's always going to be some kind of debate and disagreement."

That's right! WHO DOES HE THINK HE IS? An American? With the right of free speech? He has some nerve!