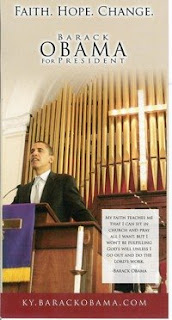 I've now seen it all. In an appeal to the very people Sen. Barack Obama described only weeks ago as "bitter" people "clinging to their guns and their religion", Obama is now using his supposed calling by the Lord Jesus Christ to win over value voters in Kentucky. Standing in the pulpit with that "old rugged cross" hanging right up there with the church organ pipes, Obama tells Kentuckians, "I won't be fulfilling God's will unless I go out and do the Lord's work." The color brochure even brags up his membership in the Trinity Church of Christ on Chicago's South Side after spending the last several weeks trying to convince us he did not share the views of his controversial pastor there, the Rev. Jeremiah Wright, and that his minister of 20 years had never been his spiritual advisor. The brochure reads:

After graduating from Columbia University, Barack Obama moved to Chicago's South Side to work as a community organizer in neighborhoods devastated by the closing of local steel mills.

Obama forged a profound connection with the people of these communities. At their encouragement, he visited a local church one Sunday. That day Obama felt a beckoning of the spirit and accepted Jesus Christ.

After Columbia University? What happened to Harvard Law School? Through Rev. Wright he accepted Jesus Christ? I thought he wasn't your spiritual advisor? Does the word "hypocrisy" come to mind?

This is bit more than this cynic can take. Last December, the news media and liberals excoriated Gov. Mike Huckabee for the so-called "floating cross" image in a Christmas video message last December, which his presidential campaign was accused of deliberately creating through the placement of book shelves behind Huckabee as he spoke. Just for the record, it really was a bookshelf behind Huckabee and not a coded message for Christians according to Huckabee. There's no coded message in Obama's brochure at all. That's a cross behind him, and he professes to be doing the "work of the Lord" by running for president. This guy really does think he's the Messiah. Can you imagine the outcry from the Left if John McCain made a similarly outrageous comment? Indeed, President Bush has been frequently criticized by the Left for invoking his Christian beliefs in his public speeches.

Now, I'm not the least bit concerned that Obama is some religious zealot we should all fear. Quite the opposite. His former minister, Rev. Wright Wright, has Obama pegged. He's just another politician who will say and do whatever it takes to get elected. I don't believe for one moment Obama joined Trinity Church of Christ on Chicago's South Side because he found the Lord Jesus Christ. Obama had big political ambitions and how better to advance his network of potential supporters than by joining one of the most thriving and fastest growing churches on the South Side. Obama had very little in common with the people of that church when he first joined it. They were a means to an end and nothing more. He needed to earn street credibility in the black community if he wanted to pursue his political career. He couldn't accomplish that without membership in a prominent black church.

What I do find highly offensive as a Christian, however, is Obama's audacity to suggest that his presidential campaign is in furtherance of work for the Lord. Was he doing the Lord's work when he fought in the Illinois legislature against the enactment of a law outlawing even late-term abortions? Don't insult our intelligence by confusing your political ambitions, Sen. Obama. with the "Lord's work." Every single one of Obama's political campaigns have been about Obama. It is almost frightening to watch the cult-like appeal he cultivates with his supporters. For him to wrap his supposed Christian faith into that appeal is simply beyond the pale. It's a fraud just like his claim as an agent of change. He isn't about change. He's a typical Chicago politician whose meteoric rise came with the help of corrupt pols and political fixers like Sen. Emil Jones, Mayor Richard Daley, Governor Rod Blagojevich and Tony Rezko. I had to laugh when I read the closing argument Rezko's attorney made this week in his political corruption trial. Joe Duffy quipped that Rezko had probably raised more money for Obama than he had raised for Gov. Rod Blagojevich. Ergo, his client couldnt' have had any more corrupt influence on the governor than he had on Obama.

Will the liberals or any of Obama's supporters complain about his blatant religious pandering to value voters in Kentucky? Will the media take him to task for it? Hell no. Duplicity and hypocrisy are terms that apply only to Obama's opponents. Those are what they call in this campaign the "Obama Rules."
Posted by Gary R. Welsh at 4:34 PM

I've never heard Obama refer to himself as the messiah, and I've also never heard him state, unlike many evangelical Republicans, that he intends to translate his private faith into public policy. If you can show me how he will do this when elected, then maybe I'd be exercised. But I see no hypocrisy in someone saying they attend church and gain something from it, or that they feel compelled to do "the Lord's work." WHAT the Lord's work actually IS is certainly open to interpretation, but my read on it is that Obama feels an obligation to do more than take care of himself. I wish more people took that attitude. It's unfortunate that more people of faith aren't as able to put their divisiveness aside so they can focus on the larger message of loving all of humanity. If Obama can make people more accepting in church communities because he believes IN church communities, I hope he wins this thing.

I make it perfectly clear in my post that I don't believe Obama is a religious zealot. His religion is used only as a means to an end--the advancement of his political career. It is insulting for him to associate it with the "Lord's work."

Maybe if the xenophobic bigots of the GOP hadn't so poisoned the political discourse with Barack HUSSEIN Obama Islamophobia, there'd be no need to remind some voters of Obama's Christian bona fides ?

Wilson, aren't you banned from this blog?

Where did you get that? I notice that conspicuously by absence is the required "Paid for by Obama for America." Are you sure you have your facts straight on who actually created and is distributing that advertisement? I would guess it is the product of a specific supporter(s), and not Obama's campaign. Look if you can tether this obvious supporter driven message over the campaign's actions, which has never attempted to sell him as a messiah, wait until you see what I can dig up on the GOP and how they like to sell their message. Once again, you appear to be fairly bias in your reporting on this matter.

tarrandwooley, If you had followed the link through--the same one on the Drudge Report earlier--your questions would be answered.

Ouch, I stand corrected! What people want say or do to get elected...that reminds me of this great campaign ad in Mississippi you should have seen. . .

I'm an Obama volunteer from Indiana and work in Kentucky. As much as I dislike the tone of this post, it's right. I would have excoriated McCain for an ad like this. I will make it known to the Obama campaign that this atheist doesn't appreciate that mailer.

I love how Obama is bitterly clinging to the front of that political piece.

I'm not usually one to be, but I will admit to being offended by this one.

People ripped Mike Huckabee (by people, I mean our "unbiased" old media cabal) for a campaign TV commercial where lighting on a shelf just made it barely resemble a cross...never mind the fact that a Christian cross is not equiaxed like that....I wonder if the editorial board of the NY Times will get all pissy over this one?

I guess I'm in the minority on this one. I have no problem with Huckabee or Obama campaigning however they want. If he wants to stand in front of a cross, let him. I'd rather have it be a visible one than a subliminal one (though I never bought the whole planted cross story...what a joke!)

I do agree with banned Wilson, though. How else could Obama convince people he's NOT a Muslim. I STILL see that circulating around the internet.

In the law, we call that "opening the door." It means that if you raise a subject, you can't gripe when you get the refutation from the other party just because you don't like the information that is conveyed or the manner in which it is conveyed. Republican hit squads and Rush Limbaugh "opened the door."

What exactly does Obama consider the Lord's work?

1) Taxpayer-funded abortion-on-demand?
2) Abandoning the people of Iraq and allowing them to be slaughtered?
3) Allowing more and more Americans to be dependent on the government to sustain life, hence robbing them of their spirit?
4) Cozying up with evil dictators with the hopes of 'changing their minds'?

It should be scary to most of us that this man is beginning to believe his own hype. The more I hear him and read his words, the more he sounds like a cult leader.