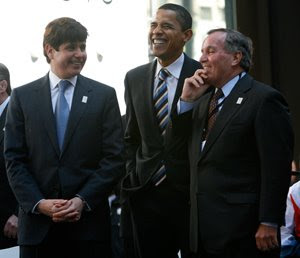 In Chicago Democratic politics, the boss is Mayor Richard Daley. The media boss is David Axelrod. And their man is Sen. Barack Obama. I've made the point over and over on this blog that Obama is not the agent of change he professes to be. He's a throwback to the worst kind of politics as usual as you can encounter. A surprising news organization, CNN, explores at this late date in the campaign just the type of hardball politics Obama played to get his start in politics. He won his first seat to the Illinois Senate by challenging the nominating petitions of all of his primary opponents. To be a candidate, you needed 757 signatures of registered voters in the district. Although his opponents' petitions contained far more than the number of signatures required, Obama sent a team of lawyers to the Chicago Election Board to find technical flaws in the petitions. For example, if a voter printed his name rather than signing it in cursive, the signature was disqualified, even if the person was a valid registered voter. The challenge worked. Obama ran for public office unopposed after getting all of his opponents disqualified, including incumbent Sen. Alice Palmer, a truly reform-minded legislator not backed by Mayor Daley. Not surprisingly, Palmer is supporting Sen. Hillary Clinton this year. Please check out this video from CNN to learn who the real Sen. Obama is. Obama would employ similar hardball politics against both his primary and general election opponents when he ran for the U.S. Senate. He destroyed Democrat Blair Hull and Republican Jack Ryan by peddling dirt culled from both Hull's and Ryan's previously-sealed divorce records. Photo of Gov. Rod Blagojevich, Obama and Mayor Daley courtesy of the Capitol Fax Blog.
Posted by Gary R. Welsh at 9:52 PM

Obama for President ...Yes, we can.......even though some blogs are obsessed with providing negative info re: him and sometimes info with half truths and racism woven into them.

That's the Obama cover, alright. If you dare attack me, I will accuse you of being a racist. It doesn't work with me. I won't back down in telling the truth about him because he has one black parent.

Oh, yea....there's some more of that "CHANGE" that Obama and Carson keep talking about.

So, artfuggins...tell us the whole truth then. Did Obama really do those things to get elected, or did the "vast right wing conspiracy" make it up?

You always make some comment to steer people away from the truth.

Concerned Taxpayer.....None of the Carsons have been mentioned in this discussion....are you confused?

Thanks Advance Indiana. You made me realize how smart Obama actually is. Maybe Obama should be President!

I didn't realize you shed so many tears for Bill Clinton.

Wait until all the sleaze about McCain's wife comes out including the vile word that McCain called her in public.........