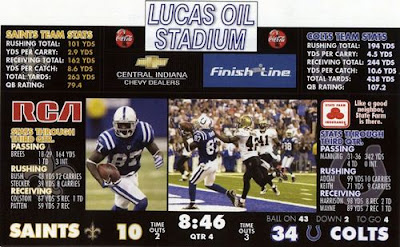 Scoreboards for the new Lucas Oil Stadium will cost $11.4 million, and close to $10 million of your taxpayer dollars will be used to pay for them. That generous Colts' owner Jim Irsay will kick in a measly $1.75 million. I guess the $125 million deal Irsay struck with Lucas Oil for the naming rights on the new stadium didn't cover that cost. It is simply an outrage that this cost should be picked up by taxpayers when the scoreboards are nothing more than an advertising revenue bonanza for Irsay's Colts. I can only hope that Mayor-elect Greg Ballard will choose people to sit on the Capital Improvements Board of Managers who actually look out for the taxpayers' interest as opposed to Jim Irsay's interest. The decision to purchase the $11.4 million scoreboards, however, was made by the Indiana Stadium and Convention Building Authority, which Gov. Mitch Daniels indirectly controls. The Authority's Chairman, David Frick, is a Baker & Daniels partner with Fred Glass, the CIB Chairman who negotiated the worst stadium lease in NFL history from the standpoint of taxpayers.
Posted by Gary R. Welsh at 4:38 PM

Anyone who is "paying their fair share" is a fool. Working side jobs for tax-free cash is no longer immoral in my book. When millionaires are giving other people's money, paying taxes becomes optional in my opinion. I am not saying go out and make $50K and pay nothing, but if you take up a side job doing yard work for a few grand a year, ask yourself if the government really deserves their cut of that money? Also, there are ways to avoid the Ir$ay tax.

It seems like only yesterday we were worrying about the $15mil it might require to build the 'necessary' parking garage.

It seems like only the day before yesterday we were worrying about how to come up with the $10mil for annual maintenance on the facility.

And I read that the cost COMES OUT OF CONTINGENCY FUNDS!!!! That's NOT what contingency funds are for. This is BS money-shuffling. What a crock!

What's absolutely amazing is that the bond issue on the Oil Can Stadium is for 30 years.
I'm 54 and the odds are real good that I won't outlive the mortgage on this thing. Neither will many of the others who cut the deal of the century with Irsay. Hell, even Jimmy will probably be long gone before it's paid for.
You know, a lot of things can happen in 30 years.
Who the hell created this Capital Improvement Board and why is their NO OVERSIGHT making them accountable to the taxpayers?
Apparently these folks think they are playing with Monopoly money and that Indianapolis is the Monopoly board.
The time to scrap the CIB is now but who can dissolve such a group?

I suppose we could have hired two teenagers to write the score on a chalkboard....it is amazing how some people in Indy are opposed to everything.............it makes you wonder how empty or full their lives must be.

Nice try, anon 7:52. The issue is who should pay for the scoreboards. If the Colts can sell advertising and make money off the scoreboards, then the Colts should pay for them. Stadiums all over the country get sponsors to pay for the scoreboards. Even high schools have figured this out. You would think someone on that finance authority would have this basic understanding. The fact that Irsay kicked in $1.75 million is an indication someone thought it would look bad if he didn't pay at least something on it, particularly since it was so much over budget.

It wasn't a negotiation; it was a giveaway.

I always think Ir$ay should be so ashamed of himself, but I highly doubt he has the humility to do so.

I live less than a mile away from this new facility and my neighborhood has been in a perpetual down slide for the past 10 years. My wife and I do the best we can with upkeep on our 87 year-old home that has been in my family for 60+ years, so it's not like I want to just move away, as some would automatically suggest.

It's so sad we've put sports teams (which the success of consistently rises and falls, look at the Pacers) ahead of improvements. Enough time will pass and those guilty of causing this will not be blamed. It will fall on the shoulders of future administrations who are left in a tight spot because of these decisions.

According to the Star:

"The upgrades make the contract about $2.5 million higher than budgeted, Executive Director John Klipsch said. About $1.75 million of the cost will be covered by the Colts, with the rest financed by project contingency funds."

So that means the scoreboard cost was already budgeted and most of the extra is being picked up by the Colts with $750,000 coming from the contingency funds.

Not quite the taxpayer ripoff you're trying to portray.

And the "taxpayers" are those who pay that 1 to 2 percent on their food and beverage tabs.

But don't let the facts stand in the way of sensationalizing a story.

anon 11:16, you ignore the fact that the scoreboard is a money-maker in terms of advertising. If the Colts get to keep all those revenues, then why aren't they being asked to pay for the scoreboards? It's just another example of how one-sided this deal has been all along.

Where were all you people when the giveaway was being hatched a few years ago ? Nobody complained then. Most Hoosiers thought this was a great idea:

Tear down a stadium that's not paid off

Pay the Colts a million a year in "gameday expenses", meaning the Colts pay less than nothing to use the stadium

Give the Colts all the ad revenue, naming rights, etc

The Star was all for it. The mayor, the governor, both political parties, everybody except about 10 Democrats who voted nay on the deal.

Remember the Colts Business Alliance, which included, believe it or not, the Indiana Department of Education ?

Not the time has come to pay the piper. And more to come - we will soon be taxed to pay the $10 million annual stadium funding shortfall.

You could say the slick con men came to town and ripped off us rubes, but even now, most Hoosiers support the new stadium. Lordy it sure is big and purty.