Ballard's Win By The Numbers 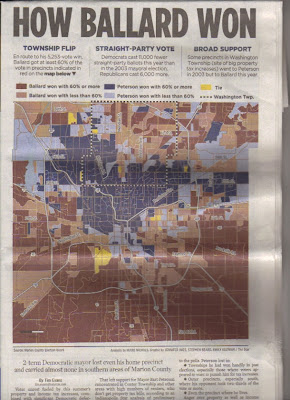 A smaller percentage of voters cast their ballots in the 2003 mayoral election than cast their votes in the 2007 mayoral election according to a Star analysis of Tuesday's vote. Only 26.2% of the eligible voters participated in Tuesday's election. The map of the county shown above (click on to enlarge) indicates the areas of the county carried by the respective candidates, with precincts voting for Ballard highlighted in shades of red, while Peterson's are highlighted in shades of blue. It's very apparent Ballard's strength came in the outlying townships, particularly those in the south, although he managed to stay close and even win precincts in Center Township as well. Ballard won many precincts in the south with 2/3 or more of the vote. Interestingly, neither candidate won his home precinct. Peterson won Ballard's Pike Township precinct with 53% of the vote, while Ballard carried Peterson's Washington Township precinct with 64% of the vote. That's a complete reversal of fortune for Peterson. He carried his precinct with 61% of the vote four years ago.

Political science professor Bill Blomquist astutely observes that Peterson only performed well in areas of the county where there were a disproportionate number of renters or African-American voters. There has been some speculation after the race that some African-American ministers were urging black voters not to vote on election day. I personally find that very difficult to believe. A long-time Democratic observer of Marion Co. Democratic politics told me awhile back that the turnout in predominantly black Center Township precincts has historically been lower than other areas of the county. Democrats did manage to pull more straight ticket voters this year than Republicans, but the percentage was down to 30% from 39% four years ago. That translated to 11,000 fewer straight ticket votes for the Democrats, while the number of straight Republican ticket votes increased by 6,000 over four years ago.

The results of Tuesday's election should demonstrate to non-believers that it is still possible to maintain a strong, two-party system in Marion County. If the Republican Party focuses on pocketbook issues and shuns bedroom issues, it should be able to remain competitive in the county, at least in the near future. The gentrification which has occurred in many Center Township neighborhoods provide new opportunities for Republican candidates where none existed before if they fashion themselves as traditional, northern Republicans.
Posted by Gary R. Welsh at 7:42 AM

It would be interesting to overlay that map over the 7th congressional district and see how the votes would total up ? There are a lot of republican votes that fall outside the 7th.

I noticed the precinct right in the middle of downtown voted more than 60% for Ballard.

The 7th district overlay would show some startling results--but it's still Democratic.

It's clear what happened. Black clergy's hold on their congregants regarding electoral matters, has been slipping for years. And Center voted about 18% or so--far below the county average, and far below the northern township averages. Some Center heavy D precicts voted 10%. Pitiful.

Who didn't know that?

Be very wary of turnout percentages. There hasn't been a purge of voters for many years. My own precinct has more registered voters than humans counted in the Census (which includes approx. 25% folk under 18yo). People get registered and then move out but the names remain on the poll book seemingly eternally.

So be wary of turnout percentages!

Turnout percentages are meaningless. There has not been a purge for years and there are names of voters who moved from Indiana 5 years ago and people who died years ago especially in areas with lots of apartments.

Could you give me the ward and precinct number of htat precinct "in the middle of downtown" that voted 60% for Ballard..........I question that but I can be convinced with facts.

"Be very wary of turnout percentages. There hasn't been a purge of voters for many years."

Wilson, you are totally wrong. With the implemenation of the Secretary of State's new statewide voter database, there were thouands of voters purged from the rolls in Marion County in the past couple of years.

anon 10:14, I think the person who made that comment is basing it on the color-coded map from the Star. You can see a small island of red among the light blue hue south and west of the I-65/I-70 split in the downtown area.

The Star analyis notes there were 15,000 more votes cast this year than 4 years ago, which it attributes to new voter registrations. I do recall a report a couple of weeks ago that there had been a significant number of new registrations leading up to this year's election.

Let me correct myself on the voter purge, those voters I said were purged were actually placed on an "inactive list" to be purged after 3 years. So I guess they're still counted even though they aren't on the active list, which would make the turnout percentage seem lower than it really was.

In my case, Wilson is partially correct (gasp!). Hell, I stated before I'm registered twice to vote at two separate locations.

One registration has my name spelling transposed.

When I tried to do the "right thing" I was told "it will eventually drop off if you don't vote with that name and address".

Sir Hailstone, per my 10:35 comment, Wilson is correct because the voters to be purged are still on the inactive list waiting to be purged under the SVRS.

Of course, the only truly important number is total voters and for whom they cast those votes. And by any measure, Center didn't perform as it should've.

Not that they ever have...but this year was even worse than most.

How does that work, Wilson? How many of thos epeople are registered 3 or 4 times, thanks to some shady election processes?

I think one thing that is getting lost in all this is that this is a huge victory for moderates. In 2004 we were told to go home because the real way to win elections was to cater to the base. Now in Marion County at least we've seen two moderates (Brizzi and Ballard) win in a row. I think there is something to be said for that.

There's always been highly intensive voter registration in my precinct which has numerous rental units. Folk register but move out after a while - the names never get purged off the voter rolls. Nothing nefarious or shady!

I dont think that there is any shady voter registration conspiracy going on.....we live in a mobile society.......

Ballard is best-defined as a populist. In other words, a county chairman's worst enemy. (Either chairman)

Brizzi is best defined as an opportunistic a---hole.

Now then. Did we clear that up?

Cleared up!! Brizzi is worse than you even described.....certainly not a moderate...idiot is more like it.