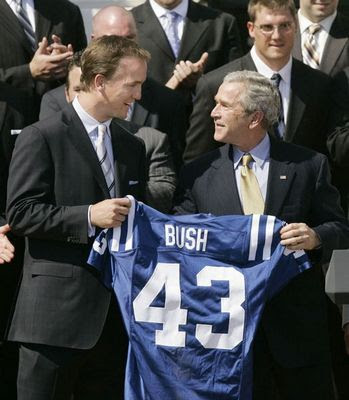 It was an opportunity for President George W. Bush to honor the Super Bowl winning-Colts. The super star status of QB Peyton Manning was ever prevalent, though, during the White House visit according to a Star report. “So a lot of people here in the White House compound have been really looking forward to seeing Peyton Manning,” Bush said Monday on the South Lawn. “They wanted to see a guy who gets more air time than I do.”

I've always wondered who gets more out of these press events--the President or the celebrity/sports heroes being recognized. At least some of the players were excited about having their picture taken with the President. "Players pulled out personal cameras to get photos with Bush, the Star reports. "They did the same with another political star and football fan who showed up for the ceremony — Secretary of State Condoleezza Rice," the newspaper adds.
The Star also has a video clip of the White House visit here.
Posted by Gary R. Welsh at 7:12 PM

Julia Carson, our Congresslady from Indianapolis, was proudly present too. She escorted the Colts out to Walter Reed to meet with the wounded veterans.

The Veterans that she refuses to support with funding for Armour and bullet proof vests? Those Vets?

As Ernie should know by now (read the newspaper!) our Congresslady Julia Carson has always voted FOR every DOD and Supplemental Bill to fully fund the troops. It was the Bush Administration that rushed our troops into war with inadequate equipment.

By the way, "Armour" is the corporation that makes Spam. She has always been an enthusiastic supporter of adult literacy programs - IndyErnie should avail himself of a remedial English class!

I'll check out the course. However, Carson can't back the troops when she sides with Pelosi every step of the way.
Sleeping through the votes and voting present isn't support.
Not standing up to and chastising Pelosi for visiting those arming our enemy isn't support.
Get real Wilson, read between the lines...the truth shall set you free.

Who cares? The non-native overpaid football players who happen to have signed to play for the gay-rejecting yet ironically allegedly god-embracing (except for that part about love thy neighbor I guess) Dungy all trot out months later w/ Mr. My Poll Numbers Can't Get Worse? Thanks for the "news"

The bi-artisan Iraq Study Group recommended the Bush administration open a dialogue w/ Syria. At least Pelosi is implementing one of the Group's suggestions, unlike Bush. Oh, and remember the Cold War? Throughout it, the US talked to its sworn enemy, the USSR. There, the truth did set me free! Try it sometime...

The key here is "recommended". President Bush chose not too.
He is the President of the United States.
Pelosi’s actions are the same as Jane Fonda's during Viet Nam.
Pelosi undermined the wishes of our President and endangered troops by sending the wrong message to our enemy.
Fonda strapped her thighs around guns that were killing our servicemen daily and laughed.
Both women are self-serving and did nothing to shorten the wars.
If the year was 1944, Pelosi would be on trial for treason.

Pelosi is a self-serving nutcase.

Since Rep. Robert Aderholt (R-AL) and Rep. Frank Wolf (R-VA) were in Syria at the same time as Pelosi, should they be similarly charged with treason?

Ernie, what about the Republicans that visited Syria? For some strange reason you haven't come down on them, only Pelosi. Go figure.

Good Lord AI, you stepped in it n ow. You failed to mention Julia was there. Shame on you.

Ernie, get a life. I have a niece who's a National Guard member, and is going abck to Iraq for the third time in June. Her ebst friend was to have come home in June, but, thanks to our ever-prescient President, will now have her tour extended to January.

Both served together in their first tour. Neither had a bullet-proof vest or enough food. Her family banded together and bought one for her, and she got written up for using civi-provided material.

She got no discipline for the food we sent her.

What else ya got, genius?

Hey Ernie, Wilson, and JTA:
Why don't ya'll start your own blog. It seems like practically every thread both here and at TDW are hijacked by some combination of the three of you.

I know you have your 1st amendment rights and all that, but it is getting very old.

There is a difference between Pelosi and the others. Pelosi is Speaker of the House, third in line for the Presidency. The others didn’t try to broker a deal involving our allies without approval.

As to the vests you made my point. Congress including Carson (when awake) should have apropriate adequate funding to supplies all of our military in Iraq with the basics armor, vests, meds, food, etc without restricting our President.

Ernie: Why are you trying to coverup for the stingy and thoughtless SOBS who short-changed the troops? Funding for our troops has been under total GOP control (President and Congress) until January of this year. All the failures must rest solely and squarely on your political party: the Republicans. Bush and his rubber-stamp GOP Congress failed the troops. Learn the truth and the truth will set up free.

You are so consumed with your hatred for Ms. Carson that you let Bush screw over the veterans and the military. Shame!

Wilson is absolutely right. Congress can only approprite what the Executive sends to them, altered, amended or otherwise changed. Ms. Carson doesn't always vote the way I want, but on the issues of war funding and veteran health issues, she's spot-on. And until January, out-voted.

Ernie, go back to civics class.

Ms. Carson served for a period of time on the Veterans Committee, and she fought hard for continued and increased funding of the hospitals and clinics. She lost most of those fights, due to the stingy Repub leadership (Armey, DeLay, et al). She was disrespected by veterans' organizations because the White House sent out ugly talking points.

How in the hell do they escape responsibility for this?

By revisionnist historians, that's how.

Bush, Cheney, Rice, and Halliburton are responsible for sending these brave war heroes off without proper armor. And food.

No one else. Period. It has improved, but it still continues.