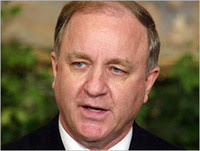 Deputy Secretary of State Randall Tobias, a former Eli Lilly CEO, has resigned his position in the Bush administration today after ABC News confirmed he was a frequent customer of a woman charged with running a prostitution service for D.C. elites. ABC News' Brian Ross reports:

Deputy Secretary of State Randall L. Tobias submitted his resignation Friday, one day after confirming to ABC News that he had been a customer of a Washington, D.C. escort service whose owner has been charged by federal prosecutors with running a prostitution operation.

Tobias, 65, director of U.S. Foreign Assistance and administrator of the U.S. Agency for International Development (USAID), had previously served as the ambassador for the President's Emergency Fund for AIDS Relief.

A State Department press release late Friday afternoon said only he was leaving for "personal reasons."

On Thursday, Tobias told ABC News he had several times called the "Pamela Martin and Associates" escort service "to have gals come over to the condo to give me a massage." Tobias, who is married, said there had been "no sex," and that recently he had been using another service "with Central Americans" to provide massages.

Tobias' private cell number was among thousands of numbers listed in the telephone records provided to ABC News by Jeane Palfrey, the woman dubbed the "D.C. Madam," who is facing the federal charges. In an interview to be broadcast on "20/20" next Friday, Palfrey says she intends to call Tobias and a number of her other prominent D.C. clients to testify at her trial.

Is this the tip of the iceberg? There must be a lot of nervous pols in D.C. tonight after Tobias' resignation. An online Star report tonight by Maureen Groppe notes only that Tobias resigned for "personal reasons."
Posted by Gary R. Welsh at 10:02 PM

So the former "AIDS czar" rings up the local whore-to-your-door to get "massages". . . who would have imagined it!

Let us hope that he practiced safe sex, setting the example for us all.

Mrs. Tobias is one in this case.

His personal pecadillos notwithstanding, it appears he used no public money or office space for this endeavour. And, his service was exemplary otherwise.

Can we assume Tobias was still getting unlimited free samples of Indiana's own Eli Lilly Cialis?

Sadly, Randy Tobias exposed himself and America to possible blackmail from foreign entities opposed to U.S. Government policies. Really, really risky! High-ranking officers involved with foreign affairs should not be out getting 'strange'!

The hypocrisy of an adulterous man with a multi-billion dollar budget pushing abstinence and marital-fathfulness is glaringly obvious. Have the loyal Bushies no shame?

"I did NOT have sex with that woman!!!".
Pres.Clinton

I sure hope Mrs.Tobias will be as understanding as Mrs.Clinton.

This is an absolute hoot!

Once again, the Republicans have to lie and fabricate history to suit their feeble ends. The actual quote is: "I did not have sexual relations with that woman, Monica Lewinsky".

Lawyers, as opposed to GOP slanderers, know the difference. "Sexual relations" is legally narrowly defined as penile/vaginal penetration (fucking). Nobody claims Bill was actually screwing Monica, they were just "fooling around". President Clinton, a lawyer, was quite accurate in his statement - misleading to the ignorant layperson perhaps, but not perjurious.

But since when is accuracy, truth and honesty ever a part of the desperate Republican playbook?

There only two things that endlessly enthrall and fascinate white Republicans: peashakes and Bill Clinton's penis ... kinda odd, isn't it?

Randal Tobias is part of a right wing administration which at every turn attacks gays and lesbians as immoral and worse.

Tobias' mismanagement of the AIDS funding Bush promised was immoral -- it was not 'exemplary'.

Tobias' disparaging statements about condoms as an effective tool to help prevent the spread of HIV/AIDS and other STD's was immoral -- it was not 'exemplary'.

Tobias has most likely exposed, or possibly even already infected, his wife with any number of sexually transmitted diseases -- including AIDS. That's not exemplary behavior, it's immoral behavior.

What an outrage for "vonnegut lives!" to post such a stupid post under Vonnegut's name. You should be ashamed of yourself.

Tobias is an immoral, arrogant, selfish bureaucrat so typical of the Republican Party and it's culture of corruption, graft and immorality.

Former U.S. AID director Randall Tobias, who resigned yesterday upon admitting that he frequented a Washington escort service, oversaw a controversial policy advocated by the religious right that required any US-based group receiving anti-AIDS funds to take an anti-prostitution “loyalty oath.” Aid groups bitterly opposed the policy, charging that it “was so broad — and applied even to their private funds — that it would obstruct their outreach to sex workers who are at high risk of transmitting the AIDS virus.” But President Bush wouldn’t budge. He signed a 2003 National Security Presidential Directive saying prostitution “and related activities” were “inherently harmful and dehumanizing.”

I just read that Tobias will be awarded the Medal of Freedom by the President in a Rose Garden ceremony next month.

So maybe you can ask Tobias what exactly happened at the IU-Indianapolis School of Law commencement. Guess who the speaker is... http://indylaw.indiana.edu/news/events.cfm#E140

Anon 10:24, thanks for the notice of Tobias giving the commencement speech at the IU Law School next month. My god, someone needs to begin a protest. It would be outgrageous for this to happen!

This is one time when Tobias probably should NOT have "Put the moose on the table." (As in, is that a moose, or are you just glad to see me?)