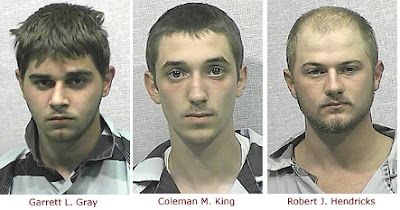 There's yet another strange twist in the brutal hate crime killing of Aaron Hall, a thirty-five-year old Crothersville man who his attackers believed was gay according to police. One of the men charged with killing Hall, Garret Gray, is the son of Jackson County Deputy Coroner Terry Gray according to the Crothersville Times. Gray's home is where the brutal beating took place, and it's also where police recovered Hall's body in a garage wrapped in a tarp. Police found the body last Sunday, or nearly 10 days from the time Hall's body was first dumped in a ditch by Hall's attackers. The body was reportedly recovered by Garrett Gray and Coleman King two days later and hidden in Gray's garage.
John Hodge, a friend to whom Gray text-messaged a digital image of himself holding a badly beaten Hall like a game trophy, reported seeing blood in Gray's home and in his pickup truck after he visited the home the day following the attack according to a report in the Seymour Tribune. An anonymous commenter who first pointed out to this blog that Garrett Gray's father is a deputy coroner observed, "After death, a body starts to putrefy within three days." "Hall's body (dead 10 DAYS) was found in Gray's very own garage," the anonymous commenter adds.
The Crothersville Times notes that Terry Gray acted as a spokesperson for the family of 10-year-old Katie Collman of Crothersville, who was sexually assaulted and murdered in 2005. "In January 2005, 10-year-old Katie Collman was abducted, sexually assaulted and murdered near her home . . . Ironically, it was Terry Gray, Garrett Gray's father, who served as the Collman family spokesman during the investigation and court proceedings," the paper writes.
News reports indicate that Hall's body was sent to Louisville to be examined. Clearly there is a potential conflict of interest in the Jackson County coroner's office in the handling of a case so close to one of its own staff.
Posted by Gary R. Welsh at 11:31 AM

They look so young. If I ran into any of these three young men on the street, it would be the last thing I would think of that they could commit such an awful crime. Is being gay that bad of a thing?

The ironic thing is how popular these cute young boys are going to be in prison if you catch my drift.

That homophobia could cause people to so devalue a human life is beyond frightening.

Thank you so much for bringing this story to our attention. The Star has yet to cover it. I copied WTHR's story and emailed it to the Republican leadership in the state house urging them to pass Rep. Porter's hate crimes law in 2008.

Thanks, Chris. I noticed that the Indiana State Trooper involved in handling public questions about the case is Jerry Goodin. He is the identical twin brother of State Rep. Terry Goodin, who represents the distrct where the crime occurred. Rep. Goodin was absent for the vote on the hate crimes bill a few weeks ago when it was defeated.

While hate crimes are certainly terrible, people are losing site that this man was not gay in the slightest, it was a ploy to make their crime seem justifiable since it seems to be condoned by some evil people in this world.

The true problem is that if your convicted of any crime what so ever as Mr. Hall had been in and out of trouble with the law, then your life has no value and people can do what they will to you with no reprecussions, as this has been the case in other murders in Jackson County, and there is no recourses for the victim's or thier families, where is the justice for the victim and their families- here there is none! It's a scary thought if one has ever been convicted of any crime.

The gay ploy seems to be working beautifully for them, at least so far it's looking promising for them.

Why hasn't any one questioned why it would take 3 young men to beat this poor 90lb man to death, which they had done to another individual a month prior, thankfully that victim managed to escape from them! And why would anyone allow their 19 year old to throw unage drinking parties on a regular bases, are we not responsible for what goes on in our own homes? and why didn't a cornorer smell that body? Is it the only one in history that didn't stink?

Leslie, thanks for sharing with us. I would like to get more of the local perspective on the killing if you are willing to talk to me. Please e-mail me at gwelsh@indy.rr.com with your contact information.

Why, yes it was the only body in history that didn't stink. The Alternative reports that a local police officer, Darryl Hickman went to the Gray home two days before the body was found, searched the residence and found nothing. He apparantly didn't smell anything either.