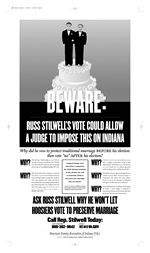 Full-page ads appeared in two newspapers in the district of Rep. Russ Stilwell (D) this past week misrepresenting his vote against SJR-7 in the Rules and Legislative Procedures Committee earlier this session. Explaining the ad (paid for by the Indiana Family Association of Indiana PAC), the AFA's executive director Micah Clark writes:

This morning newspapers in Booneville and Newburgh have full page advertisements pointing out that Representative Russ Stilwell violated a campaign pledge that he made to Advance America for their 2006 voters guide stating that he would "Support Senate Joint Resolution 7, passed by the 2005 General Assembly so the citizens can vote in November 2008 to ban same-sex marriages and civil unions."

Like the ad that ran last Sunday in Anderson concerning Austin’s flip-flop, the voters in Stilwell’s district deserved to know how he voted and what his vote means for marriage protection in Indiana.

Showing a picture of two men atop a wedding cake, the ads warned Stilwell's constituents, "Beware: Russ Stilwell's vote could allow a judge to impose this on Indiana." The ad ignores the explanation Stilwell offered for voting against the amendment, which pertained to a second paragraph of the amendment extending its reach well beyond the definition of marriage. It leaves Stilwell's constituents with the impression a state judge could impose same-sex marriages on Indiana if the amendment is not enacted. In fact, Indiana has never recognized same-sex marriages, and a Defense of Marriage Act enacted more than a decade ago specifically bans same-sex marriages in Indiana. Moreover, the Act has been upheld by Indiana's Court of Appeals.
What the AFA doesn't want Stilwell's constituents and other Hoosiers to know is that there is a growing consensus among nonpartisan legal scholars that amendments such as SJR-7 are completely unnecessary where the legislatures have already spoken on the subject. AI will bring you more on what a prominent, conservative Reagan-appointed judge has to say about the amendment, including how it does the opposite amendment proponents promise by empowering judges to further meddle in the debate over marriage.
The AFA of Indiana earlier launched a similarly misleading media campaign in the district of Rep. Terri Austin (D), who too voted against SJR-7 because of the overreaching contained in its second paragraph.
Posted by Gary R. Welsh at 5:26 PM

As I recall, there some Commandments that trump Leviticus ... the AFA should recall that prohibition on bearing false witness (lying)

Leaving the debate about gay marriage out, I don't see why this group is in the wrong. We have a state law against marriage, but they are correct that a judge could still over-turn that law. The decision to judge the constitutionality of a law stops at the supreme court, not the Indiana's Court of Appeals. As such, I think everyone agrees that Indiana's law could still has a chance to be ruled unconstitutional. There is no misrepresentation on this fact. Judges could still rule the current law unconstitutional.

I am sure most of these folks would have voted for the amendment had part two not been there. I think the group should focus more on passing an amendment that just contains part one.

Only a person completely uninformed of Indiana constitutional law could make the assertion there is a possibility Indiana's Supreme Court would ever find a right for same-sex marriages in the state constitution. The Court of Appeals was bound by the precedents set by our Supreme Court when it decided Morrison v. Sadler. The proponents of the amendment cannot cite a single past opinion of the court which would provide the slightest hint the court could ever reach such an outcome.

I do believe that the AFA should change its name to the ABA, The American Bigotry Association.

Now, now, now Gary! You know perfectly well that a meteorite might come crashing through the dome of the Statehouse and wipe out the entire Legislature, Governor and Supreme Court. Taking the AFA position, you know that an underground bunker at least 1000 feet underground needs to be built to protect our beloved State Government against such a possibility.

Gary,
Did Lilly and Cummins ever respond to Hershman's demands of providing proof that it wasn't just a couple of homosexual agenda-ists in the hr deparment that decided those companies would speak out in opposition to SJR7?

Paula, I'm sure they responded to the letter in some way, but I haven't heard of anything being publicly-released concerning it. The point of the letter was to try to stir up problems with shareholders more than anything.

Why should these companies respond to the hateful diatribe from the SJR-7 sponsors, except, perhaps, out of respect for the offices they hold? That'd be the only reason.

The veiled threats were playground bullies fighting for turf. They embarrassed themselves.

9:46, in Indiana public school fourth grade classes, we learn about state history. I paid particular attention, lo those many years ago, to the Indiana Constitution. It has been a contiuing source of enjoyment since then.

Most troubling about this propsoed SJR7 amendment, to me, was the prohibition regarding future judges' actions on the measure.

Never in the state's history, to my knowledge, has one separate but equal branch of government, been co-opted out of the entire debate process before a shot was fired.

It's a disgusting power grab by the legislative branch and should be defeated on those grounds alone.

Love em or loathe em, judges in our culture play an important role. Historically, even though they err sometimes, their branch has been the stopgap against silly and arcane laws that seem to succumb to temporary or ridiculous pressures. Either we're unbelievably lucky in Indiana, or the hordes of activist judges have not yet gotten the message that they can subvert the will of the legislative branch wihtout just cause.

Without regard to the rest of the Amendment, its upheaval of our Constitution, by summarily discarding one equal branch of government, made it disposable.

Your fourth-grade teacher would be ashamed, Eric, er Micah, or whomever 9:46 is. Read up. It's usually helpful.

These ads aren't going to change anyone's mind nor win AFA-illegally endorsed candidates these incumbents's seats, they're merely fundraising tools for the AFA. Stilwell won the last election w/ 69% of the vote. Austin won w/ 63%. There have been, to date, no letters to the editor in the Anderson Herald-Bulletin opposing her vote, either after she cast it or after the AFA ad in that paper.

I wonder if the continued barrage of attacks coming from the AFA types and their followers might actually backfire instead of help them gain more momentum. News and blogs consistently show that Hoosiers are concerned about other important issues like job growth, healthcare, etc. For instance, it seemed to me that the opinion piece written by Woody Burton in the IndyStar recently didn’t get much favorable commentary. I wonder if people will instead start getting fed up with their whining.

I would be interested to see some financial figures on how much money they are spending to keep “advertising” their cause. I bet the numbers are astronomical. A better use of their money, time, and energy would be for eradicating extreme poverty.

Here’s an update for anyone interested in the South Bend Mayor race. An article was published in the South Bend Tribune officially confirming Republican Juan Manigault has received endorsements from the Indiana Family Action and the American Family Association. It also highlights an interesting question asked during a forum for mayoral candidates that took place last Thursday. Candidates were asked if they could: "separate your personal religious beliefs from your duties as a civic leader," and "how does this play into your views on discrimination against the GLBT (gay, lesbian, bisexual, transgender) community?"

Manigault responded with the typical canned “special rights” speech: "For groups that it's hard to determine what their sexual preferences (are), I don't support special rights for that population," Manigault said, "because I believe strongly, and in my heart, that those individuals are already protected under the Constitution."

Jeepers, we are so dumb, don’t you feel better already?