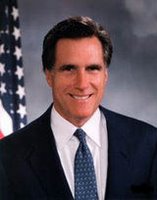 The late former Michigan Governor George Romney (R) and his son, Massachusetts Governor Mitt Romney (R), share much in common. Devout Mormons, the two racked up successful careers in business before launching their political careers as governors of their respective states. And both became leading aspirants in the Republican Party for president. But there is one defining difference between father and son which points to a major problem in the Republican Party today--respecting the importance of supporting civil rights for all Americans.

Before entering politics, George Romney worked his way up through the business world to become Chairman of the American Motors Corp., a company he was largely credited with saving from the brink of bankruptcy by marketing the Rambler compact model, which became one of the hottest selling cars in America during its time. He left AMC to run for governor of Michigan, an office he won election to three times. Though he once served as a missionary and bishop for the Mormon Church, a church that many consider to be exclusive, he championed civil rights laws as governor in the 1960s. A people's governor, he became known for making time each week when Michigan residents could stop by his office and tell him about their concerns for five minutes each.

His popularity and success as a governor made him an early favorite to win the GOP presidential nomination in 1968. His campaign got tripped up, however, when he used a poor choice of words to explain his shift from support to opposition to the Vietnam War. He complained that he had been "brainwashed" by the U.S. military when he toured Southeast Asia a fews years earlier. Then-former Vice President Richard Nixon would jump on the statement as a sign of weakness and effectively put Romney out of contention, leading him to drop his bid before the first presidential primary. His son, Mitt, missed out on his presidential race altogether, opting instead to do work in France for the Mormon Church.

George later served as Nixon's HUD Secretary but left federal service after Nixon's first term, complaining that the administration's "support for urban programs had been less than what he had hoped for." When he left public service, he founded the National Volunteer Center, which promotes volunteerism. The organization later merged with the Points of Light Foundation supported by President George H.W. Bush.

Mitt Romney, like his father, enjoyed a very successsful business career. After serving as a senior executive of a leading management consulting firm, he started his own venture capital firm, which grew into one of the nation's most successful venture capital and investment companies. Staples, Domino's Pizza, Sealy and Brookstone are among the company's success stories. Mitt first gained national notoriety when he took over the troubled 2002 Salt Lake City Winter Olympics in 2002. He earned great respect for his management and ability to mobilize volunteers to make it one of the most successful U.S. Olympic events.

Mitt launched his first bid for office against Sen. Edward Kennedy. Kennedy handily defeated him, but he came closer than any Republican challenger had before. In 2002, Mitt ran as a long-shot candidate for governor of Massachusetts. He won in an upset election most pundits had expected to go to the Democrats. As Governor of a state with a Democratic-controlled legislature, Mitt has proven to be adept at crossing party lines to get his legislative programs acccomplished. He did this earlier this year to make Massachusetts the first state in the country to tackle the problem of the uninsured in a comprehensive fashion to make health insurance available nearly to all Massachusetts residents.

It was after he assumed office as Governor that the Massachusetts Supreme Court ruled in favor of same-sex marriages. Romney was highly critical of the decision and did everything he could to block its implementation. He charged that the decision actually harmed the rights of children:

They viewed marriage as an institution principally designed for adults. Adults are who they saw. Adults stood before them in the courtroom. And so they thought of adult rights, equal rights for adults ... Marriage is also for children. In fact, marriage is principally for the nurturing and development of children. The children of America have the right to have a father and a mother.

Romney supported unsuccessful efforts to add a ban on gay marriages to the state's constitution. Although he initially suported a compromise initiative to allow the state's voters to choose between same-sex marriages or civil unions, he later withdrew his support for it, saying he opposed civil unions as well. He was successful, however, at resurrecting a nearly century-old law which prohibits non-residents from marrying in Massachusetts if the marriage would be void in their home state. In explaining his hard-line position on same-sex marriages, he speaks of his concern for it undermining religious institutions:

Among the structures that would be affected would be religious and certain charitable institutions. Those with scriptural or other immutable founding principles will be castigated. Ultimately, some may founder. We need more from these institutions, not less, and particularly so to support and strengthen those in greatest need."

Because he is a Mormon, many traditional evangelical conservatives, who consider Mormons not to be true Christians, have been expected to oppose his nomination. Perhaps it was because of this bigotry towards Mormons by other Christian faiths that led his father George to fight so hard to advance civil rights for all Americans. Mitt is not detoured by any hangups the Christian right may have against him because of his Mormon faith. He has been shamelessly reaching out to these folks, having recently appeared on Pat Robertson's 700 Club. When compared to the divorced John McCain, Romney's "family man" credentials are pretty impeccable. In the end, the Christian right will likely fall into line behind Romney for no other reason than no other candidate can articulate their "moralistic" message more effectively than him, Mormon or not.

So what's the point of it all? Mitt Romney is the guy to beat. John McCain simply doesn't have what it takes to get the GOP nomination despite his early favorite status. Mitt Romney is the only one with the whole package to pull together a large enough bloc of conservative voters in the GOP primaries to win the nomination. The unfortunate aspect of Mitt's likely success in the 2008 GOP presidential race is that he must embrace the very bigotry that his own father despised to even have a serious chance at winning the nomination. Even worse is that he appears so comfortable doing it. Then again, that says everything about how much the Republican Party his father knew has changed over the past three decades.
Posted by Gary R. Welsh at 8:56 PM

mitt romney is republican. in the first paragraph, you list him as a democrat.

Stallio--thanks--that's what happens when you write late at night.

It is interesting that you believe Mitt Romney is in line to win the GOP nomination. ‎Unlike the Democratic Party, the Republican Party seems to work from the top down ‎when picking Presidential nominees. They choose people who have been around for a ‎long time and in their mind “deserve” the nomination (explaining how Bob Dole got the ‎nomination in 1996). George W. Bush is the exception, winning the nomination because ‎the Republicans did not have anyone in line to take it that year.‎

That being the case, John McCain has been around for some time, and some would argue ‎that he will be the nominee because it is “his turn.” Romney, on the other hand, has not ‎been around that long. Do you think the Republican national party will get behind ‎Romeny? If they don’t, how will Romeny get enough momentum to become the ‎nominee?‎

Tippecanoe--you make a very good point. A notable recent exception is our current president. He ran and won the first time after holding office as Texas' Governor for only 6 years, although it didn't hurt having dad as a former president. I base my prediction on McCain faltering. There's a negative edge to McCain that people find a turn off. I do think the religious conservatives have a real problem with him because he dumped his wife, who stood by him all those years he was a POW and raised his children alone, for a much younger, wealthy woman. His serious problems with cancer are a major concern as well. Romney is so much more charismatic and has executive experience, unlike McCain. GOP voters will be drawn to him because he has demonstrated leadership ability and is such a strong "family man." Right now, I would describe McCain's support as a mile wide and an inch deep.