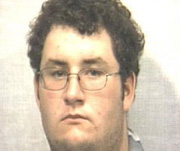 Acting quickly on a tip a concerned family member shared with a reserve deputy, the Delaware Co. Sheriff's office moved quickly in investigating and then arresting Zachariah Blanton in connection with the I-65 sniper shootings over the weekend that left one dead and another injured. Indiana State Police and Gov. Mitch Daniels made the announcement of the arrest, but it was the hunch of that lone reserve deputy's hunch that led police to Blanton. The news reports haven't named the reserve deputy yet. He was said to be an acquaintance of Blanton.

According to Delaware Co. Sheriff George Sheridan, Blanton has prior arrests for sex crimes and theft. He has not yet been adjudicated for those crimes according to Sheridan. Presumably he was charged as a juvenile for those crimes because of his age, although Sheridan didn't specifically state that. He is, however, being charged as an adult for murder, attempted murder and criminal mischief for the shooting spree he went on over the weekend.

The Star reports that State Police Superintendant Paul Whitesell said the 17-year old Blanton was "remorseful and cooperated with investigators." “I would call that a confession,” Whitesell said. Often these cases seem to drag on for weeks, months or even years, and it is later learned that there would be several missed opportunities during the course of the investigation. That cannot be said of this case. Law enforcement did it's job and did it well.
Posted by Gary R. Welsh at 6:51 PM

I'm glad that they caught this SOB. I was worried when I had to go down to Indianapolis earlier this week to do some research. I'm glad that now I can drive down the highway in peace.