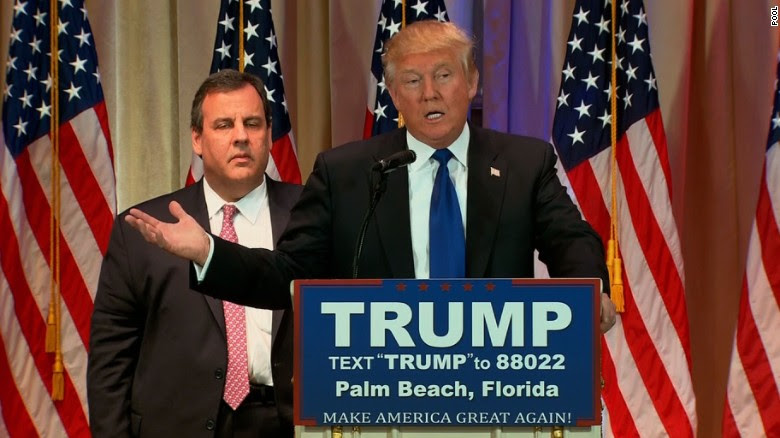 EGGHEADS EXPLODED AFTER TRUMP ENDORSEMENT
The talking heads on cable TV news have been talking about the high-level secret talks going on among top GOP donors who are confounded by the rise of Donald Trump as he's sweeping most of the Super Tuesday states other than Ted Cruz's home state of Texas and neighboring Oklahoma. The boys and girls in Gannett's Langley headquarters are setting their sights right now on Gov. Chris Christie, who is standing with Donald Trump in his Palm Beach headquarters tonight.

The Gannett executives' heads literally exploded after Gov. Christie sold out the establishment by endorsing Trump. As retribution, Gannett's six New Jersey-owned newspapers jointly-issued editorials demanding that Christie either resign as governor or be recalled. "We’re fed up with Gov. Chris Christie’s arrogance," the papers wrote. "We’re fed up with his opportunism. We’re fed up with his hypocrisy." "For the good of the state, it’s time for Christie to do his long-neglected constituents a favor and resign as governor. If he refuses, citizens should initiate a recall effort," the editorial said.
Posted by Gary R. Welsh at 9:55 PM

Gannett is another loser. Was watching CNN (because I like Amanda Carpenter a lot) and they were covering the Cruz (she had been his communications director and a good one). Someone photoshopped Paul Ogden into the background ? Cruz is giving his acceptance speech and this guy is smiling up a storm....Did anyone else notice that?
New Jersey is called the Soprano State for good reason. It is entirely corrupt. Gannett does nothing, of course, to clean it up but probably profits off some of the corruption as they do here in Indianapolis. Of course they will be for the establishment as Trump or Cruz would save them the expense of having a Washington, D. C. Office.

After eight credit downgrades, contractor giveaways, and slipping to 49th in job creation, NJ newspaper editorials are reflective of how residents now view the once popular but now absent governor. The latest FDU poll shows Christie's NJ approval rating at 31% and disapproval at 59% falling from 77% and 17% in 2012. Christie realizes that his political future in the state is nil and he is already moving on to secure a position in DC. The attentive, angelic face peering behind Trump at his Mar-a-Lago home was not only the opportunist but also a proven pathfinder to 740 Park Avenue where a pot of gold in Koch money can be secured should the winds continue to blow Trump's way.

While I don't disagree with the fact that Gannett is a loser, I find nothing wrong with the NJ newspapers calling on Christie to resign....he has been so absent from the state, what with his disastrous New Hampshire adventure, his Dallas Cowboys/Jerry Jones fanboy adventure, and now his Trump opportunism....what a fat, arrogant jerk -- the idea of him calling on Rubio to do his job and vote in the Senate after Christie's excessive absences is almost as ludicrous as Trump feigning outrage at Vincente Fox's use of the F word. Give me a F...ing Break.

This is somewhat off-topic, but I'll ask it nonetheless.....It's been a few years since I moved from Indy,but I do still follow news and I have relatives back in the state. I left not too long after Mike Pence became Governor and I've heard mixed feelings about him. What is the likelihood that he gets re-elected this year ? Are most people still going to vote Mike again for another term ? I saw that John Gregg is going to run against him.

Gannett is merely giving cover to Christy with their six NJ corrupt newspapers. Christy is pure establishment and my guess is that he is Trump's new "minder". It is sort of a move not obvious and not meant to be. I think Trump is smarter than that and Cruz will set him straight if he isn't. I do think Gannett is CIA thru and thru just like National Review and other neo con operations. Neo cons are actually communists in origin and really never lost that world view. They also tend to conflate the interests of a faction of Israeli sorts with the interests of America and are quite willing to lie about it.