Now that Democrats are in complete control of Indianapolis' City-County government expect to see a lot more of this. Yesterday, the Indianapolis Star and all of the TV stations were reporting on the shooting of Michael "Kevin" Gill, an off-duty firefighter for the Indianapolis fire department. That's not his only job with the city-county government. Gill is also a full-time deputy coroner for the Marion Co. Coroner's Office. Gill was reportedly in fair condition at Eskenazi Hospital after he ran into a nearby mosque seeking medical attention after being shot on the city's north side.

Several years ago, I represented a Marion County deputy coroner who believed he had been fired because he was white by former Marion Co. Coroner Kenneth Ackles, who cost Indianapolis taxpayers several million dollars to settle racial discrimination lawsuits brought by employees and contractors like my client fired by Ackles for being white. The fired deputy coroner had been a firefighter with a township fire department that merged into IFD. He was told he had to give up his job because city rules didn't allow him to hold two full-time city jobs. The only problem with that explanation was that Gill, who is black, got to keep his job with the coroner's office when his township fire department merged with IFD.

Gill told police that he was returning to his Corvette parked behind some slummy-looking homes in the 2200 block of E. 38th Street yesterday morning when someone opened fire on him. News reports suspected Gill may have been targeted because he was driving an expensive car. Court records show that Gill has sued numerous individuals in Center Township Small Claims Court for money owed to him. Public records also indicate Gill and his Troy Investments own numerous properties in Marion County. I wouldn't be surprised if Gill is also a landlord of several homes in run-down neighborhoods in addition to being a double dipper.

Speaking of double dippers, are Steve Talley and Vernon Brown still holding down city jobs after their election to full time jobs as Lawrence Township Trustee and Warren Township Trustee, respectively? Talley has a make-work job with the Indianapolis Metropolitan Police Department and Brown has been a long-time battalion chief with IFD. Both had to give up their jobs as City-County Council members after a new law took effect that barred city employees from serving simultaneously as city council members. Advance Indiana readers will recall that Gary Coons, who is white, was forced to resign his job as Perry Township Trustee when he took over as director of Indianapolis' homeland security division.

UPDATE: Check out the surveillance images of the man who is suspected of shooting Gill. He's carrying what has been described as a Sentry .223 assault rifle. I don't think he was planning to hold up Gill. It looks like he was trying to finish him off. The suspect's name is Jerry Glover, who has a lengthy rap sheet that includes drug-related and gun charges, among others. Glover's E. 38th Street address listed in court records is not far from where the shooting took place 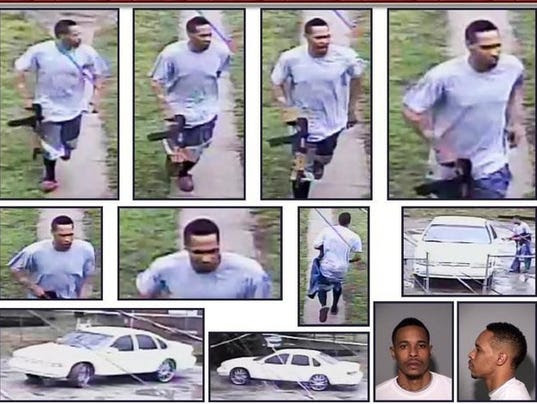 Gosh, this story certainly raises some questions!
1) Why is there a double standard concerning employment & elected positions in Marion County?
2) What was Gill doing parked in an alley in that neighborhood?Getting some food from a neighbor!!! Yeah, right...
3) Does Gill own the house where this happened?
4) Who lives in that house?
Well, I'm quite sure that the crack reporters in this city will be looking into all of this and will let us know.

Tally not only has a made up job, he has a take home car also.

Gill is free to work at any job or jobs he chooses. The only one he cannot hold is a representative on the Marion County-City Council. Due to an attempt to hold on to power at the CCC, the Republican controlled State Legislature mandated that a CCC member could not also hold a city job thus eliminating 3 office holding Democrats from reelection. Gill does not hold or has ever served on the CCC as implied.

Wrong, anon. 1:20. Gill is a double dipper. He has two, full-time city jobs. Talley and Brown do as well. That's an assertion, not an implication.

A bro sleeping with another bro's woman?

Why is IMPD pretending it doesn't know why Glover was shooting at Gill? Another cover up?

This story never passed the sniff test. WHO in Indianapolis didn't think this was not on the up and up? I have some swamp land for sale.

What are the qualification to be a deputy coroner? Are only those who are city employees allowed to apply? Is there anyone who is NOT a city employee hold this position???

I have to go take a shower. This story made me feel dirty.

The only qualification (in 2005) to become a deputy coroner is being a licensed Emergency Medical Technician - Basic and pass a criminal background check. I checked into it back then when I was between jobs - of course I know I'd never get hired there since I'm quite white. Since nearly all firefighters in IFD are EMT-B's they can "moonlight" or in this case work full time on the two of three off days from IFD at the coroner's office.

Why are there absolutely no actual investigative reporters in Indianapolis? This city desperately needs someone who could dig into IMPD's half truths, cover ups and outright lies.

I am not holding my breath: local media can't cover the Colts let alone the goings-on of IMPD and IFD.