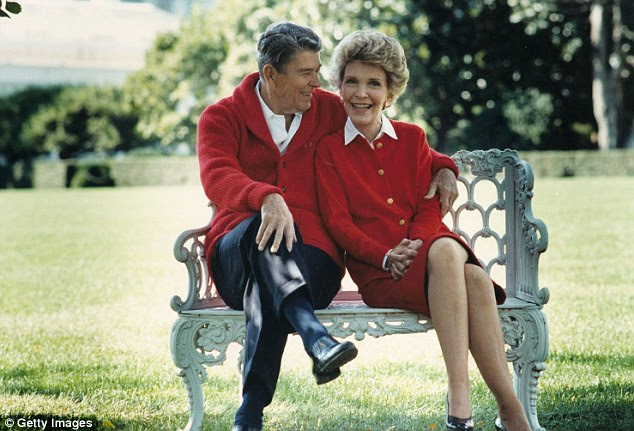 Former First Lady Nancy Reagan passed away earlier this morning in her Bel Air home. She was 94. The former actress was best known for the "Just Say No" to drugs campaign she led during her husband's two terms as president. She was born in New York as Anne Francis Robbins, but her name was later changed to Nancy Davis after her mother, Edith Luckett, a Broadway actress, divorced her father as a young child and married a Chicago neurologist, Dr. Loyal Davis, who adopted her and moved their family to Chicago. She grew up to be an actress on Broadway like her mother, but she eventually made her way to Hollywood where she met Ronald Reagan, then the president of the Screen Actors Guild, whose assistance she sought when her name appeared on a list as a communist sympathizer. They immediately hit it off and were thereafter inseparable. They married in 1952 and starred in one film together, "Hellcats of the Navy," in 1956. She and Reagan had two children together, Patty and Ron, who both survive her. She also had two step-children from Reagan's previous marriage to actress Jane Wyman, Maureen, who died of cancer many years ago, and Michael, whom Wyman and Reagan adopted together during their marriage.
Posted by Gary R. Welsh at 2:30 PM


I had the high privilege and honor to meet and briefly chat with Nancy Reagan in Indianapolis when she joined Ronald Reagan at the Early home during a leg of the Presidential campaign trail. I will always remember Nancy Reagan chuckling, her beautiful eyes dancing as the words about my admiration for her husband tumbled out of my mouth.

Since the time Nancy Reagan held the title of First Lady, NEVER has this Nation enjoyed such a classy, poised, thoughtful, sincere, and elegant woman.

The rough politics and coarse individuals now on the political scene are an embarrassment to the Country when held up to the platinum standard of grace and elegance like Nancy Reagan. God Bless both Ronald Reagan and Nancy Reagan.

Editorial: A Pence PR problem that won’t go away

The media was unfairly hard on Nancy. She was excoriated for raising private dollars to redecorate the White House and wearing expensive designer dresses. No other President and First Lady have spent the public's money with reckless abandon the way Bararck and Michelle Obama have spent money. Michelle and her daughters gets free designer clothing to wear all the time and nobody says a word about it. Nancy and Ronald were audited by the IRS and forced to pay taxes and penalties for the value of dresses she had been given by designers to wear to official events. The Reagans also didn't spend lavishly on travel like the Obamas, who have eclipsed every president in history when it comes to spending on pleasure travel. Nancy was totally condemned by the White House press corp for simply insisting on a new set of White House china for official state dinners since there was no complete set of china. The china hadn't been replaced in years, and much of the original set had either been broken or pilfered by guests. There's a total double standard with the Obamas. Nobody can criticize them just because he's the first half-black president.

The love Nancy showed for her Ronnie at this funeral was moving and something I will always remember.

President Reagan and his Nancy brought class back to OUR house in Washington after it had been trashed over the years. OUR house needs that class again.

God bless you, Nancy! May you be at peace and with your Ronnie.

Gary, isn't it true that if duh media didn't have double standards they wouldn't have any at all? One of the things I look forward to in a Trump Presidency, is the banning of every piece of weak human excrement in the White House Press Corps and their employers as well. I'd go back to Reagan days to make up that list of presstitutes. And, I'd let them howl, and bark, and whine, and starve. I like the idea of Trump telling FOX to shove off. I suspect the average American also knows to begin to hate our lying and stinking and covering up media.
Anent such, the wife tells me that as of a couple of years ago all IPS Administrators had to take a course on what to do about the sexual exploitation of kids in school. This might have been related to near jailing (and should have been jailing) of the Muncie cover up of student rape. The IPS Superintendent is guilty of attempted coverup and so is the stinking Board that hired him? His blackness ought be no defense.

RIP Mrs. Reagan. Tell your husband we really need him back.

Yeah, sure, we know what you use to define class, don't we?

And BTW, didn't Nancy Reagan utilize astrologist to help define American policy? Perhaps that explains why her husband sent 241 unarmed Marines to their deaths in Lebanon before he did a "cut-n-run".

Imagine the outrage your readers would express if the current first lady relied on the occult.

Your pathetic hatred and conflation of history is a sad thing, a very sad thing. You, sir or madam, belong in a thickly padded cell, encased in the latest fashionably styled straight-jacket available.