A Tale Of Two Autopsies: Brown Versus Todashev 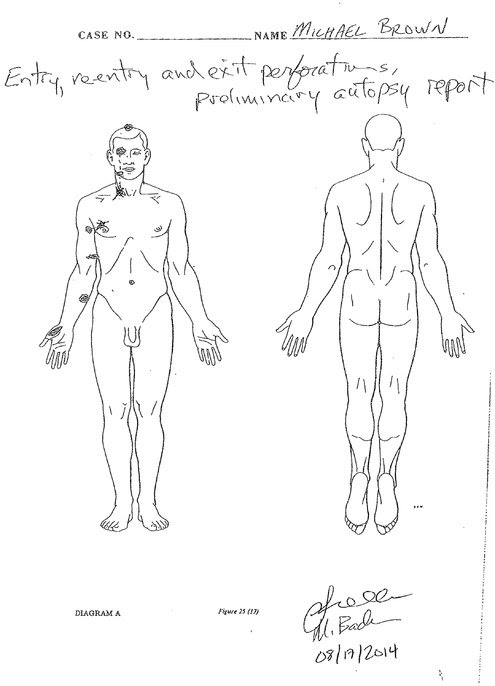 The New York Times reports today on a private autopsy report prepared on the family of Michael Brown, the 18-year old killed in the Ferguson, Missouri police action shooting that has led to protests and riots in the northern St. Louis suburb for more than a week now, finding that Brown was shot six times including twice in the head. To demonstrate the agenda of mainstream media, I will compare the report The Times ran on the autopsy report of Ibragim Todashev, a unarmed Chechen immigrant and friend of the two men accused of setting off two bombs near the Boston Marathon finish line who was killed by an FBI agent after hours of being questioned by FBI agents and Boston police in his Orlando apartment, with their reporting on the Brown shooting. Here's the narrative The Times provided on Todashev's autopsy report, which showed that Todashev had been shot seven times, including one bullet that entered through the crown of his head:


As the Chechen man, Ibragim Todashev, began to write his confession to the murders, an F.B.I. agent and a Massachusetts State Police detective in his apartment with him glanced away for a second, and Mr. Todashev picked up a table and threw it at the F.B.I. agent, lacerating the back of his head. Mr. Todashev then dashed into his kitchen and could be heard rummaging through the drawers.

Regaining his footing, the agent drew his gun as Mr. Todashev, holding a pole over his head, ran at the detective as if trying to impale him.

The agent fired at Mr. Todashev several times, knocking him down. Despite being shot, he tried to regain his footing and again lunged at the detective.

The description of the shooting in Orlando, Fla., was included in more than a hundred pages of documents released on Tuesday by local investigators in Florida and federal officials in Washington who were looking into whether the F.B.I. agent should be charged with killing Mr. Todashev.

After an autopsy, forensic tests and dozens of interviews, the investigators in Florida and Washington ultimately came to the same conclusion: The agent had followed the Justice Department’s guidelines that say agents can fire their weapons if they believe they or someone else is under the threat of violence.

The Times' narrative was notably supportive of the FBI agent's account of how he came to fire seven bullets into Todashev's body during a supposed confrontation after hours of interrogation, making it appear that a flimsy, aluminum broom handle supposedly wielded by Ibragim was a lethal weapon. It neglected to mention that the FBI had supposedly videotaped the entire interrogation, except for the part where Todashev tried to attack the FBI agent while supposedly signing a confession and refused to release the video tape. While it mentions the agent fired several shots at Todashev, it makes no mention of the total number of shots that entered his body--seven. It neglects to mention that the autopsy results showed that none of the seven shots were fired at close range. There's no specific reference to one of the gunshots entering the crown area of Todashev's head. There's no reference to the fact that he had multiple gunshot wounds on the upper part of his body, including one that entered directly into his chest and two that shot through his arm and into his upper body, or the two gunshot wounds he suffered in the upper middle part of his back.

The Times' report on Todashev's autopsy report included no diagrams of the gunshot wounds Todashev suffered. The Times' report made nothing of the fact that the FBI report on the shooting had refused to identify the name of the FBI agent who shot Ibragim. We later learned that it was Aaron McFarlane, a controversial former Oakland police officer who had been the subject of several civil rights lawsuits before he retired from the department at age of 31 due to a disability and had started drawing a disability paycheck before joining the FBI, was the agent who shot Todashev.

Now let's contrast The Times' report on Todashev's autopsy report to its report on the private autopsy conducted for the Brown family of their son's death, which included a diagram prepared by the forensic pathologist showing where the gunshots entered Brown's body:


Michael Brown, the unarmed black teenager who was killed by a police officer, sparking protests around the nation, was shot at least six times, including twice in the head, a preliminary private autopsy performed on Sunday found.

One of the bullets entered the top of Mr. Brown’s skull, suggesting his head was bent forward when it struck him and caused a fatal injury, according to Dr. Michael M. Baden, the former chief medical examiner for the City of New York, who flew to Missouri on Sunday at the family’s request to conduct the separate autopsy. It was likely the last of bullets to hit him, he said.

Mr. Brown, 18, was also shot four times in the right arm, he said, adding that all the bullets were fired into his front.

The bullets did not appear to have been shot from very close range because no gunpowder was present on his body. However, that determination could change if it turns out that there is gunshot residue on Mr. Brown’s clothing, to which Dr. Baden did not have access . . .

Dr. Baden said that while Mr. Brown was shot at least six times, only three bullets were recovered from his body. But he has not yet seen the X-rays showing where the bullets were found, which would clarify the autopsy results. Nor has he had access to witness and police statements.

Dr. Baden provided a diagram of the entry wounds, and noted that the six shots produced numerous wounds. Some of the bullets entered and exited several times, including one that left at least five different wounds.

“This one here looks like his head was bent downward,” he said, indicating the wound at the very top of Mr. Brown’s head. “It can be because he’s giving up, or because he’s charging forward at the officer.”

He stressed that his information does not assign blame or justify the shooting.

“We need more information; for example, the police should be examining the automobile to see if there is gunshot residue in the police car,” he said.

Dr. Baden, 80, is a well-known New York-based medical examiner, who is one of only about 400 board-certified forensic pathologists in the nation. He reviewed the autopsies of both President John F. Kennedy and the Rev. Dr. Martin Luther King Jr., and has performed more than 20,000 autopsies himself.

The Times, like other major media, had already reported on the identity of Brown's shooter, Officer Darren Wilson, within days of his shooting. We didn't learn who Ibragim's shooter was until nearly a year after his shooting. The Times prefaced its report on Todahsev's autopsy by claiming he was just beginning to write out a confession for his supposed role in a triple homicide three years earlier. It also emphasized the agent's account that he had first been assaulted by Ibragim and that he was charging him when he shot him. The Brown autopsy report by The Times makes no mention of video footage showing Brown assaulting a store clerk during a robbery he allegedly committed minutes earlier, or the officer's account that he had first been assaulted by Brown while inside his police car,  that Brown had allegedly tried to grab his gun during the confrontation, or that he was allegedly charging the officer when he shot him.

Nobody is going to convince me The Times' wildly variant news reports on these two different police action shootings doesn't reflect an agenda on the part of the newspaper. To date, The Times hasn't run a single piece questioning the government's account of Ibragim's shooting, or for that matter, the government's explanation of how the FBI had repeatedly interviewed and monitored the two young Boston Marathon bombing suspects over a period of years and had even received warnings about them from the Russians but was clueless about their so-called radicalization that supposedly led them to plot, plan and successfully execute a highly sophisticated terrorist bombing.
Posted by Gary R. Welsh at 7:33 AM

Does it matter? Cops at any level can execute the citizens, and nothing happens. Nothing. How many cops are on death row for killing citizens? When a cop is killed, however, cops from states away send cars for the funeral procession, sending a clear message that the entire police (can we call it an army by now?) acts as one force.

Until we see a national awareness that the primary purpose of the Second Amendment is to protect yourself from people in the government who want to do you harm, America's war on the citizens will continue.

Local police kill over one citizen, every day.

Sadly, the gun movement in America worships at the feet of cops and generally hates individual liberty, so we're unlikely to see a reclamation of liberty by the folks who have the most guns.

The reports in all mainstream media on Ibragim Todashev almost universally highlighted his alleged fights and characterized him as violent and a hothead, even though his friends and family disputed this completely. The shooter of Todashev was FBI, who are apparently able to withhold their identities at will. The only reason Aaron McFarlane, the shooter, was revealed, is because a blogger was able to unredact his name from the State Attorney's report. The assailant of Iraq veteran Scott Olsen, shot in the head and brain damaged for life while peacefully protesting at an Occupy demonstration, was an Oakland Police Department officer who has yet to be identified after two years. Every day unarmed citizens, black, white, sane and mentally ill are slaughtered by some criminal with a badge. Don't try to make this about race or religion.