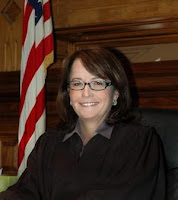 
“I offer my sincerest congratulations to Justice Loretta Rush on being unanimously selected to be the new Chief Justice of Indiana. With this selection, the Judicial Nominating Commission has made history and ensured that Indiana's Supreme Court will continue to have outstanding leadership in the years ahead. With her extensive legal experience, proven character and commitment to public service, I am confident that Chief Justice Rush will serve our judiciary and our state with distinction."

Congratulations go to Judge Loretta Rush. We look forward to learning a lot more about her and her record.