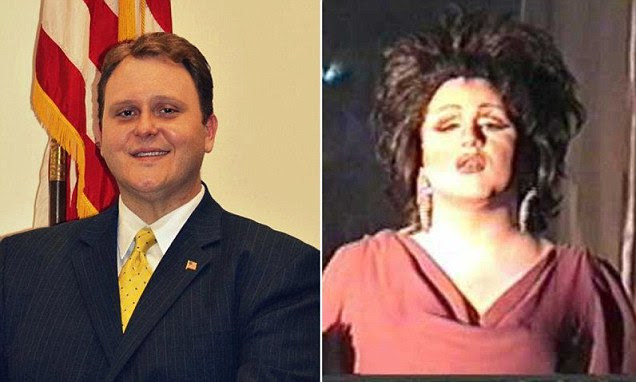 A conservative, 34-year old man, Steve Wiles, who is seeking the Republican nomination in North Carolina for a state senate seat, has been outed as a former drag queen performer at a now-defunct Club Odyssey gay nightclub in Winston, North Carolina. Wiles now works as a real estate agent and opposes same-sex marriage. Wiles' work as a female impersonator for nearly eight years going by the name, "Miss Mona Sinclair," was outed by his former boss, Randy Duggins, who called his opposition to same-sex marriage hypocritical. Wiles defended his views, saying that his opposition to gay marriage does not equate to being anti-gay. He said that marriage is "a religious institution" and that state control of marriage is "unconstitutional." "I am a Christian . . . I try to live a life that reflects my belief." Wiles is running against two other Republican contenders in the race and was not considered likely to win the race even before his past was revealed. Wiles also once worked as a former promoter of "Miss Gay America" before he was suspended for "conduct unbecoming to a promoter of the Miss Gay America pageant system."
Posted by Gary R. Welsh at 6:41 AM

This belief or meme that “opposition to gay marriage does not equate to being anti-gay” is the newest quip du jour of the ultra-right when cornered on the subject of their blatant, stated discrimination. For the record, opposition to gay marriage does, in fact, equate to being anti-gay. In just the same way that opposition to inter-racial marriage equates to being racist. Hypocrisy is a real problem in the Republican party right now. Younger Republicans are being quite successful in getting blatantly evil, discriminatory language dropped from many States’ Republican platforms, but the older generation is just entrenched in their hatred, and they just don’t see it or get it. There are just some people who will never understand gay people or accept their existence, in just the same way that there are still people who feel superior to other races but won’t accept that as racism. And then you get these weird results where black Christian ministers just rail on gay people and white Christian missionaries from the United States instigate serious criminal sentences for gays in black African countries like Uganda. The oppressed become the oppressors, urged on by the conservative Christiians. My grandmother used to say there was nothing worse than a bible thumper, that they were the most hypocritical type of person there was.

It may not be reported by the media, but there are many gays who have never sought legal recognition of same-sex marriages; rather, their primary concern was that there be legal recognition of their civil union that treated them no differently than opposite-sex couples short of legally declaring their relationship a marriage.

Its a moving target, Gary, because of the speed at which the movement progresses. There was a time when gay people were satisfied to get anti sodomy statutes repealed so that they were no longer jailed, but that doesn’t mean it should satisfy the movement today. Marriage means different things to different people. There are gay people who will never marry out of personal choice but still think denial of that right by the State is discrimination. Recognition of civil unions was once a much sought after goal. But the clear trend today is toward 50 State recognition of the right to marry. It would be lovely if the States would get there on their own, but the U.S. Supreme Court may beat them to the punch. Either way, its not going to be the Mississippi way much longer. Once upon a time half the country would argue to the bitter end their right to own slaves. So right did they believe they were that they were willing to rip the country apart in civil war for their god given right to own their slaves. But now we look back on them all with disdain. How could they be so wrong? The “protection of marriage” was always a ridiculous argument. Half of all heterosexual marriages end in divorce. Even half the Christian ministers have been divorced. Protection of marriage and the family? The hypocrisy just oozes from the argument. Its a little reported fact that young Republicans nationwide are leading the charge toward acceptance of same sex marriage within their own party. The writing is on the wall. Guys like Greg Garrison on WIBC are bigots and haters. These black Christian ministers preaching against gays from the pulpit are bigots and haters. They just don’t get it yet.

Greg Garrison shamelessly promotes his recently acquired Story Inn in Brown County despite its rich, gay history. My family has lived in Brown County for generations and it is full of gay people. Nashville is a town of artists and restaurateurs and theatre people from the Brown County Playhouse. I can remember Sunday brunches at the Story Inn decades ago that were full of gay people and the type of people who like gay people. This new ownership of the Story Inn by the Garrisons begs a few questions since we have heard Garrison say the most disgusting things imaginable about gays, gays who would marry, gays who would serve in the military etc etc. If the Garrisons and the Story Inn don’t want gay business or to do business with gay people from Nashville or Bloomington, perhaps they should just say so instead of backhandedly insulting gay people on the radio and inviting guests onto their programs with even more controversial views: Guests from Breitbart and such who regularly compare us to pedophiles and equate our marriages with marriages to dogs and polygamous marriages. I’m just saying, if you want a fine example of hypocrisy, what about bed and breakfast owners in a very gay town who seem to look down their very rich, Christian, Hamilton County noses at the kind of gay people who made the hospitality industry in Nashville possible.

Does a turnip mean different things to different people? Words have precise meanings. "Marriage" means a man and a woman. Two persons of the same sex bonding themselves to one another requires a different word.

"Nashville is a town of...and restaurateurs"

Are you serious? When in Nashville, you drive back to Indy or Bloomington as fast as you can to get something to eat.

" Guests from Breitbart and such who regularly compare us to pedophiles and equate our marriages with...polygamous marriages."

You brought this on yourself. When marriages ceases to be the union of a man and a woman and becomes merely the union of consenting adults, two (2) immediately becomes an arbitrary and discriminatory number.

If gays can "marry," there is no logical reason to deny two men and two women the ability to have a cooperative and loving "marriage" of four persons.

…blah blah blah. Another hyperventilating Christian warning gay marriage will lead to polygamy. Let me remind you that gay marriage has been legal since 2001 in Europe without dire consequences. Polygamy remains confined to communities of ultra right Christians in Mormon Utah.

The question I have for the homos is why do they think marriage should be strictly confined to two persons?

If the root purpose of marriage is not for the raising of children, as the homos want us to believe, but for companionship and life sharing, how can units of two, three or four not be companions and share their lives?

How is a unit of a man and a woman arbitrary, backwards, intolerant, homophobic, etc., but the number of two persons in a marriage is fixed in stone as if a provable mathematic equation?

Heterosexuals obsessed with the polygamy issue should address their odd questions, curiosities and obsessions re polygamy to the conservative Christian denominations associated with the Mormons. Honestly, Christians are the only ones talking about polygamy, and they simply can’t seem to get enough of it. Europeans find our fundamentalist Christians quite odd; much “queerer” than the relatively stable, even boring gay population.

"Heterosexuals obsessed with the..."

a) no one looking for marriage equality every said a marriage between a man and a woman is arbitrary, backward, or homophobic; heterosexuals are free to marry who they choose, and should be...as should homosexuals. the point is, it's NOT arbitrary...people who are in heterosexual couples did not arbitrarily choose to be with a man or a woman by flipping a coin. nor did those in same-sex couples.

b) my personal opinion is that I don't understand why polygamy is such a big issue. most people would not choose to be in a relationship more than 1 person, but plural marriage happens all throughout the bible, and is not specifically outlawed in the new testament. (There is a passage that says a bishop should have only one wife, but that is hardly a commandment.) many cultures today (not just Mormons) have plural marriage. However, that being said, a vast majority of people would STILL be in monogamous relationships even if plural marriage were legalized. And frankly, people who want to be in plural marriages already live in them without the "stamp of approval" of the state, as evidenced by a plethora of reality TV shows on the topic.