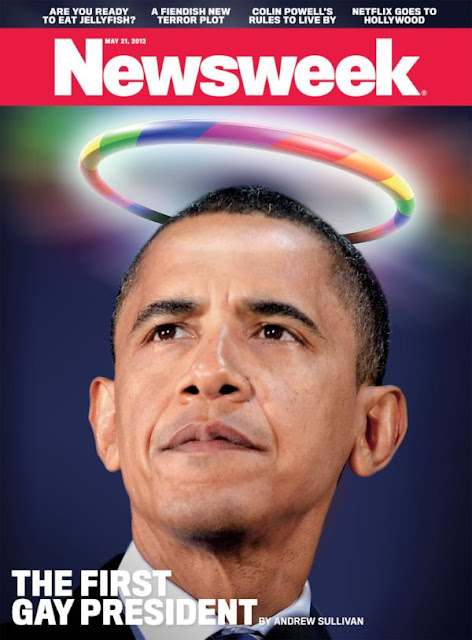 Remember how Bill Clinton and his African-American supporters used to entertain us with the claim that he was the first black president because he supposedly did more for blacks than any other president, including President Abraham Lincoln, who was assassinated because he freed the slaves, and President Lyndon Johnson, who pushed and signed into law the Civil Rights Act of 1964? Well, now a gay reporter for Newsweek magazine, Andrew Sullivan, has dubbed Obama the first gay president. The claim actually contains a lot of truth. Obama is a closeted homosexual who frequented Chicago gay bathhouses before gaining notoriety and likely had one of his gay lovers, Donald Young, rubbed out shortly before the kick-off of the 2008 presidential race to keep him silent about their relationship. Young was the former choir director at Obama's southside Chicago church where the controversial Rev. Jeremiah Wright preached who was gunned down in his apartment in December, 2007 after another gay man with ties to Obama, Larry Sinclair, claimed to have spoken to Young about his relationship with Obama. The NY Post is reporting that Wright claims a member of Obama's campaign team offered him a $150,000 bribe to stay silent until the 2008 presidential election was over. Wright is also claiming that Obama held a private meeting with him at which he also asked him to keep silent. Wright probably knew about Obama's relationship with Young, and he was more concerned about him keeping quiet about that relationship as opposed to Wright's controversial political views. Obama doesn't have to worry about a criminal prosecution like the one his 2008 Democratic presidential foe, John Edwards, is now facing in a North Carolina federal courtroom for allegedly using campaign money to keep his affair with Rielle Hunter under wraps. Obama and U.S. Attorney Patrick Fitzgerald cut a deal that allowed Fitzgerald to keep his job in exchange for not prosecuting Obama, who committed crimes equally as bad, if not worse, than the crimes for which Fitzgerald prosecuted former Illinois Gov. Rod Blagojevich.
Posted by Gary R. Welsh at 3:25 PM

Fitzgerald is great at deal-making. Come November, I will be voting for Gary Johnson for President, who told the national Libertarian Convention that he would rather be tortured to death than vote for either Romney or Obama.