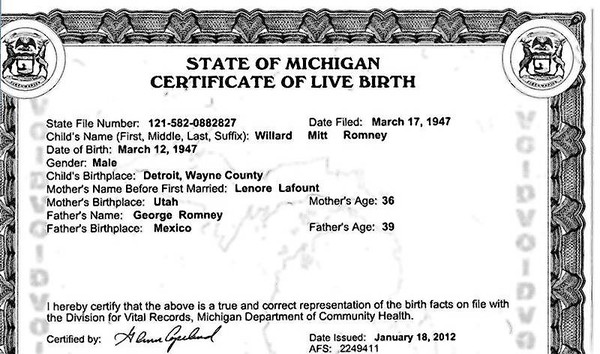 The Chicago Tribune has become nothing but an arm of David Axelrod's campaign consulting firm. Col. Robert McCormick would weep if he were alive today to see what a leftist propaganda rag his newspaper has become. The Tribune has covered up all of Barack Obama's political corruption in Chicago, while digging up every piece of dirt it can find on any person who has ever opposed him in a political election no matter how trivial to help pave the way for his election victories.

The Tribune played an early role in dismissing any one who questioned Obama's natural born status as the lunatic fringe. Forget that Obama first told his publicist back in the 1990s that he was born in Kenya, a supposed "factual error" of the publicist that remained on the publicist's website for the following 16 years until Obama announced he was running for President. Those school records in Indonesia which identified him by a completely different name and listed his citizenship as Indonesian are totally irrelevant. And never mind that there is a serious legal argument that even a person born in the U.S. to an alien parent cannot be considered a natural born citizen--according to the only authoritative Supreme Court decision on the subject and the common sense notion that a dual citizen cannot be a natural born citizen. Let's do talk, however, about the fact that Mitt Romney's birth certificate shows that his father was born in Mexico:


Finally, there is definitive proof: The presidential candidate was born in the United States, and his father was not.

Yes, Republican Mitt Romney appears eligible to be president, according to a copy of Romney's birth certificate released to Reuters by his campaign. Willard Mitt Romney, the certificate says, was born in Detroit on March 12, 1947.

His mother, Lenore, was born in Utah and his father, former Michigan governor and one-time Republican presidential candidate George Romney, was born in Mexico.

So on a day when real estate and media mogul Donald Trump was trying to help Mitt Romney by stirring up a new round of questions about whether Democratic President Barack Obama was born in the United States, Romney's own birth record became a reminder that in the 1968 presidential campaign, his father had faced his own "birther" controversy.

Back then, George Romney - who died in 1995 - was a moderate who was challenging eventual President Richard Nixon in the Republican primaries.

Records in a George Romney archive at the University of Michigan describe how questions about his eligibility to be president surfaced almost as soon as he began his short-lived campaign.

In many ways, they appear to echo today's complaints that Trump and some other conservative "birthers" have made about Obama while questioning whether Obama - whose father was from Kenya and mother was from Kansas - was born in Hawaii.

In George Romney's case, most of the questions were raised initially by  Democrats who cited the Constitution's requirement that only a "natural born citizen" can be president.

As early as February 1967 - a year before the first 1968 presidential primary - some newspapers were raising questions as to whether George Romney's place of birth disqualified him from the presidency.

By May 1967, U.S. congressman Emmanuel Celler, a Democrat who chaired the House of Representatives Judiciary Committee, was expressing "serious doubts" about George Romney's eligibility.

The historical revisionism that takes place in this story is perhaps more troubling than the bias exhibited in it. Obviously, the motivation for running the story is to remind people that Mitt Romney's father was born in Mexico--to two U.S. citizen parents, but the story leaves the impression that the matter of George Romney's natural born citizenship status in 1968 was resolved in his favor, which couldn't be further from the truth. In actuality, Romney was driven from the Republican presidential race over the issue. He dropped out before the first contest--the New Hampshire primary--after the publisher of the influential Manchester Union-Leader threw down the gauntlet and announced he was filing a lawsuit to block his candidacy. Although George Romney produced legal opinions that favored his status, he wasn't about to let the courts decide the issue when push came to shove. The article even mentions a highly-disputed congressional research memo released late last year that suggests that even children born to just one U.S. citizen parent outside the country would be considered natural born citizens.

At one point, the Congressional Research Service - an arm of the Library of Congress that is supposed to provide authoritative but impartial research for elected members - advised that its analysts agreed with George Romney, according to a congressional source.

In a paper in November aimed at clarifying presidential eligibility, the Congressional Research Service declared that the practical, legal meaning of "natural born citizen" would "most likely include" not only anyone born on U.S. soil but anyone born overseas of at least one parent who was a U.S. citizen.

Notice how the definition of a natural born citizen has evolved over the last four years. Everyone defending Obama agreed four years ago that it was only necessary for Obama to be born in Hawaii in order to be considered a natural born citizen regardless of the fact that his father was a Kenyan. Now we're being told that even if Obama was born in Kenya it would make no difference because his mother was a U.S. citizen. It looks like the Omedia is preparing us just in case of the possibility that the truth may not be what we've been told for the past four years--even as it continues to deride those who ask the legitimate question as crazy birthers.
Posted by Gary R. Welsh at 10:23 PM

So how is Romney not an "anchor baby?"

Since Obama was born to an American mother, it appears that both Romney and Obama have the identical claim to citizenship.

Can we please declare both of these horrible candidates void and get someone I'd vote for on the ballot?

Again, don't confuse a citizen with a natural born citizen. They are not synonymous. George Romney was deemed a citizen at birth by virtue of a federal statute because his parents were U.S. citizens and chose to report his birth in Mexico to the State Department. He was not a natural born citizen. If Obama was born in Hawaii, he is a citizen by virtue of the 14th Amendment, which declares him to be a citizen regardless of the citizenship status of his parents, but the 14th Amendment does not make him a natural born citizen. If he was born in Kenya, he could by virtue of a federal statute be deemed a U.S. citizen because his mother was a U.S. citizen--again--if she reported his birth to the State Department. Curiously, there was just one such reporting of a child born in Kenya during the time frame that Obama was reportedly born. The State Department seems to have lost/destroyed the records that would prove who that child was. The people who wrote the Constitution and these statutes understood the difference. We live in a dumbed-down society today where people are simply incapable of discerning the differences and those who know better intentionally misinform because they can do it and get by with it.

So if I understand this correctly, both Obama & Romney are not 'natural born' citizens and therefore do not meet the qualifications to run for President. Is this correct?

Mitt Romney is an NBC. He was born in America to two U.S. citizen parents. George Romney is not an NBC. He was a citizen at birth by statute because his parents were citizens and they elected to register him as a citizen with the State Department. Obama is not an NBC because he was born both a British citizen and an American citizen by law; only children born in the U.S. to U.S. citizens are natural born citizens.

"The Deliberate Dumbing Down on America" at youtube and elsewhere on line Is a wake-up moment. Charlotte Iserbyt's book, DELIBERATE DUMBING DOWN OF AMERICA (e book download is now free to all) and her and her son's websites are dedicated to educating us about this travesty. Btw, this magnificent woman deserves being termed the consummate whistleblower.