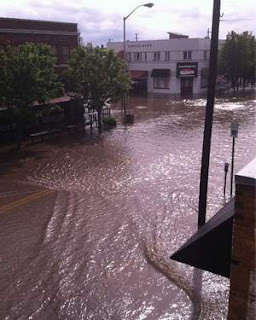 A short time after the Board of Zoning Appeals unanimously rejected a variance petition sought by Ersal Ozdemir for his Broad Ripple parking garage/retail development project, afternoon storms flooded the streets of the village as storm sewers became overtaxed. Ozdemir had sought a variance that would have allowed him to build below the flood plain, a move opposed by city planners and neighborhood groups. Mayor Greg Ballard gave Ozdemir, one of his largest campaign contributors, $6.5 million in taxpayer dollars for the project that was supposedly aimed at easing parking problems in the village. Only after the proposal was announced did the public learn that most of the parking spaces in the new parking garage will be used by ground level retail development planned for the site. A previous study had deemed the proposed site at the intersection of College and Westfield as ill-suited for a parking garage because of the triangular shaped lot on which the parking garage would sit adjacent to the busiest intersection in the village, posing line of sight and pedestrian safety concerns. Nonetheless, the Ballard administration chose this site among competing proposals in order to reward Ozdemir for the tens of thousands of dollars he donated to his re-election campaign. Ozdemir will have 100% ownership of the project and receive all of the revenues despite the significant public contribution to the project.
Posted by Gary R. Welsh at 5:49 PM

Maybe the city should spend some of that money on storm sewers instead of building a parking garage/strip mall for someone else to rent out.

Exploding manholes, of another kind.

Can anyone clarify rumor that Citizen's Water made a mistake at the Broad Ripple dam that caused this?

There are reports that two floodgates which should have been open were closed and likely contributed to the inability of the surface water to drain more quickly. I didn't think it rained enough to cause that much flooding.

How is Ballard stealing 6.5 million from taxpayers and handing it over to a private party not a crime?

Some of the biggest names in crime history never pulled a 6.5 million job or had 6.5 million in aggregate haul.

How are the people in any way morally obligated to pay taxes for the purpose of enriching campaign contributors?

This isn't government. This is a racket.

A good prosecutor could unravel how much pay to play politics has corrupted Indianapolis, but you have to be committed to unraveling it. That commitment is currently lacking.