Will This Finally Bring An End To Elected Judges In Marion County? 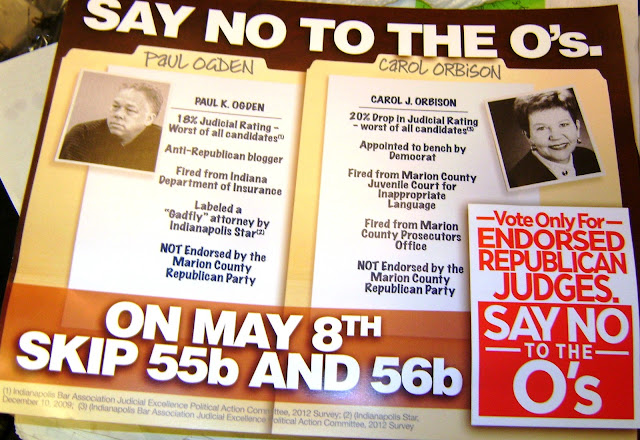 The Marion County GOP's defamatory attacks on Marion Superior Court Judge Carol Orbison and attorney Paul Ogden in this mailer should lead the Indiana General Assembly to bring to an end the slating process that shuts out meaningful choices for voters in selecting who becomes a judge. I hope the slated GOP judicial candidates are proud of the campaign the Marion Co. Republican Party is running on their behalf because I sure as hell am not as a elected Republican precinct committeeman.
Posted by Gary R. Welsh at 9:56 PM

I read the Court of Appeals decision on Paul's whistleblower case against the Indiana Department of Insurance. It is sad that he attempted to work in the best interests of the taxpayer and got fired for it. Sad still that he was denied any remedy in court. Because he knows how to stand up for what is right, even at great personal cost, I hope voters will elect him as a judge.

Elected Judiciary does NOT work!

The wife of the Democratic Party Chairman has been on the bench ONLY as a result of the fact that the Dems are GUARANTEED that seat...and she "married" the right person. Remember how she was rated? 69% of the Indianapolis Bar Association gave her a "NOT RECOMMENDED" rating....and her rating for ethics, well, look at it yourself:
http://www.indyjudges.org/Becky_Pierson-Treacy.html

-But if we are to have a judiciary based on merit, how would it work? Who would determine the best qualified and make the selection?

OMG: Greg Bowes, have you read

-or are you aware of how many law suits (that may be frivilous) he has filed AGAINST the city????

Greg,
Paul's case has been appealed to the Supreme Court. Still waiting on a decision on transfer.

Despicable. A slated judge simply cannot be trusted as impartial or honest.