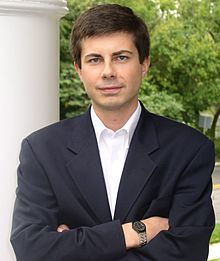 South Bend's 30-year old mayor, Pete Buttigieg, has become somewhat of a boy wonder in Indiana politics. The former Rhodes Scholar was tapped by Indiana Democrats as their State Treasurer candidate in 2010 before becoming one of the youngest mayors in the country this year after beating his Republican opponent last year with 74% of the vote. He was praised in a number of corners for his quick and decisive action in getting a human rights ordinance backed by the LGBT community that had stalled before the city council for years enacted into law during his first months in office. He also won high marks for seeking a better deal for the city on a downtown office tower that's been in foreclosure when he convinced the council to scrap a plan that would have called for an investment of $5.7 million into the city's tallest building as part of a redevelopment plan proposed by a Chicago developer.

Buttigieg's early going as mayor has not come without its share of problems. He has been criticized for choosing too many young and inexperienced people to surround him in the mayor's office, and his relationship with some members of the council within his own party have become frayed. His handling of a scandal within the South Bend Police Department, in particular, has brought him the most heat and has some community activists calling for his resignation.

The police department controversy centers around a discovery that the department had been recording phone conversations allegedly in violation of federal wiretap laws, which led to an FBI investigation. Buttigieg demoted the police department's African-American chief, Darryl Boykins, at a time that racial tensions in the city have heated up. Buttigieg also fired the department's communications director, Karen DePaepe. Buttigieg initially offered little information to the public about his personnel changes at the department, citing the ongoing investigation.  He then told reporters that he demoted Boykins and fired DePaepe in order to protect them from criminal charges, a claim that infuriated attorneys for Boykins and DePaepe. Buttigieg told the South Bend Tribune that U.S. Attorney David Capps and the FBI told him that he would have to make personnel changes or federal charges would be filed. "Charges were not filed because we acted to satisfy federal authorities," he said, "so that they would use prosecutorial discretion."

Attorneys for Boykins and DePaepe, who insist federal wiretap laws were never violated by the recording of phone calls, think the mayor is being untruthful when he claims he was pushed into the personnel changes by federal authorities.

"The U.S. attorney's office informed me on more than one occasion that they have no involvement in the personnel decisions made for and by the city of South Bend," Boykins' attorney, Thomas Dixon, said.

DePaepe's attorney, Scott Duerring, said she was considering resigning after Boykins' demotion, because she believed he was being treated unfairly. Duerring said Assistant U.S. Attorney Donald Schmid encouraged her not to quit.

"The assistant U.S. attorney in charge of the investigation ... personally called Karen at her house and said, 'Please don't resign. There's no need for you to resign,' " Duerring said.

"There was never an indication that they were involved in personnel decisions at the South Bend city level," he said. "It absolutely makes no sense whatsoever."

Furthermore, Duerring said, the phone recordings at the police department don't qualify as violations of the Federal Wiretap Act. "Police departments record incoming lines all the time," he said. "It's not a violation to do so."

Buttigieg has said he became concerned about the recording of phone calls when individuals complained to him that they had become victims as a result of the recorded conversations. Boykins claims the FBI was investigating practices that had been implemented before he was named as the city's police chief in 2007. One of the allegations made is that some of the recorded phone conversations captured persons making racist comments about Boykins. Buttigieg has refused to release tapes of any of the recorded conversations and claims he has not listened to any of the calls. DePaepe claims she had listened to the recordings and prepared a report with notes on the content of some of them. DePaepe claims the mayor's staff threatened to have her arrested if she discussed the content of the tapes.

Community activists backing Boykins and DePaepe have called for Buttigieg's impeachment. When first told of their plan, Buttigieg dismissed it, saying such a legal procedure was not available under Indiana law. The Secretary of State's office confirmed to a reporter for ABC 57 News in South Bend that impeachment is a legal option under Indiana law. The community activists have accused Buttigieg of being part of a conspiracy to block release of information about the recorded conversations and intimidation. From ABC 57 News:

Mayor Buttigieg said Thursday night that he didn't think there was an impeachment procedure in place for mayors in Indiana. Well, there is one; it is not something that is easily accomplished, but it is possible to remove a sitting mayor from office.

According to the spokesperson for the Indiana Secretary of State Elections Division, Valerie Kroenger, there are several ways to impeach a mayor.

Showing up to work intoxicated, malfeasance, death or resignation are some of the ways a mayor can be removed; as are being convicted of a crime.

Conviction of a felony is grounds for immediate removal from office. Being convicted of a misdemeanor requires more steps to be taken before a mayor can be removed.

“Under Article 6, Sections 7 and 8 of the Constitution of the State of Indiana, all state officers other than justices of the supreme court or judges of the court of appeals of Indiana or the Indiana tax court, all other judges, prosecuting attorneys, and all county, city, town, and township officers are liable to impeachment for any misdemeanor in office.”

Wednesday, Mario Sims, speaking on behalf of a community activist group, announced that plans were being put together to impeach Mayor Pete Buttigieg as a result of the way Buttigieg has handled the scandal surrounding the discovery of telephone recordings at the police department that are said to contain unethical, racist, and possibly criminal content . . .


According to DePaepe, she was threatened with arrest if she or anyone else talked about the investigation the FBI conducted into suspected felony violations of the Federal Wiretapping and Electronic Eavesdropping statute.

This allegedly happened at the time of her termination, and was supposedly said by Mike Schmule, Mayor Buttigieg’s Chief of Staff, in the presence of Rich Hill, a special attorney Buttigieg commissioned to handle issues related to the federal investigation while Interim City Attorney Aladean DeRose was on vacation.

According to his profiles on the Faegre Baker Daniels website, “Rich Hill has served as bond counsel for numerous cities, counties and towns in a variety of economic development, redevelopment and traditional financing projects.”

According to a profile for Aladean DeRose on what appears to be her personal website, “With strong litigation and appellate experience, Ms. DeRose concentrates on many aspects of general practice including banking, family law and employment discrimination law.”

She opened a private practice in South Bend in 1982.

Impeachment has been rarely, if ever used in Indiana. The House of Representatives brings the charges and the Senate sits in judgment under Indiana's Constitution. It's highly doubtful Buttigieg's critics could ever convince the legislature to bring impeachment charges against him in the absence of more evidence against him, particularly when it largely involves statements and actions taken by others who work for him.
Posted by Gary R. Welsh at 9:30 AM