I couldn't help but notice the contrasting images portraged by the re-election campaign of Mayor Greg Ballard in his Google ads versus the headlines this weekened. "Reduced violent crime by 10%, homicides lowest in 15 years," reads one of Ballard's ads. WTHR has a breaking news story: "IMPD Officer Shot." Another headline reads "Two Teenagers Shot Near Circle Centre Mall." Reporting on a 15-year-old and a 40-year-old woman being shot at a birthday party on the westside, a WIBC headline reads "Police Investigate Westside Shooting." There's no word yet on the condition of that IMPD officer who was shot early this morning while making a traffic stop. He has been taken to Wishard Hospital. None of the other shooting victims appear to be suffering life-threatening injuries.

UPDATE: This is not good news. Fox59 News is reporting the IMPD officer was shot in the head and is in critical condition. The Star quotes a police spokesperson as saying the wounded officer is breathing on his own, at least one hopeful sign.

UPDATE II: The shot police officer has been identified as 29-year-old IMPD Officer David Moore (shown below). He was struck four times in the head and neck and is on life support.
UPDATE III: There seem to be conflicting reports on the details of the shooting. News reports now indicate Moore was shot twice in the face and once in the spine. Another report indicates he may have also been shot in the thigh. The shooter remains at large. Police have identified Thomas Hardy (shown below) as a person of interest in the shooting. 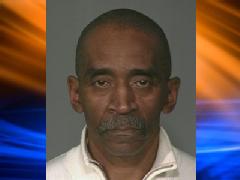 UPDATE: Police took Hardy into custody at 5:30 p.m. after he was found in a home in the 2300 block of Indianpolis Avenue. Good police work!

UPDATE: I checked the Indiana Department of Correction records on Hardy. He has served time for no fewer than 11 convictions since 1984, mostly related to theft-related charges. His most recent conviction occurred in 2008. At the time of his arrest, he has been accused of stealing a car and robbing a store, in addition to shooting Officer Moore. Despite repeatedly committing the same offense, Hardy was being let off with relatively light sentences and hardly ever served the full sentence he was given, which explains why he was able to become such a frequent repeat offender. The legislature might want to take cases like this into consideration as it considers letting off offenders easily to save money on the criminal justice system.
Posted by Gary R. Welsh at 10:17 AM

Ballard's the guy who promised to reduce crime, eh?

And, while we're at it, where's your birth certificate? How will we know you're really an American?

It was the first full moon of the year. We're in for a lot more.

Why did this particular shooting merit the collective attentions of the entire police force? Are the many other shooting victims less deserving of police crime-solving efforts?

That's a new low Cato. Have some class.

I'm all for kicking ass when a police officer gets shot. Good that they got the guy.

However, there's a feeling that the same people are doing a lot of the same crimes. I don't know if you've ever had the experience of dealing with a robbery, burglary, etc. and you get the sense that the cop doesn't really care. He's going to file the report and that's about it.

There's a saying that police can't prevent crime - they just show up after it's happened.

But if there were more aggressive efforts at solving "minor" crimes, a lot of these criminals would be off the street and it would be clear that lawlessness isn't tolerated.

It's worked in NYC.

If you're referring to "Broken Windows," that's more of a political game where they can claim to be doing something that doesn't cost anything. Everybody seems to forget that when NYC experienced their large drop in crime the size of NYPD increased by nearly 50%. In fact, the drop in crime didn't begin with the implementation of Broken Windows it began earlier when Dinkins ran for reelection on a public safety platform, but that's a conversation for another day.

As a John Q. Citizen, I wouldn't expect 200 cops to show up to the hospital if my family member was injured in such a manner. I also wouldn't expect cops to volunteer their own time and turn their own schedules upside down on a Sunday to help somebody they don't know and have never met. Ditto for a burglary, robbery, etc.

I'm guessing the average cop takes dozens of major felony reports a month. I would think they simply don't have the time or effort to put into every case the same effort they put into a case in which they are instantly emotionally vested. Furthermore, I know there's a theory (dunno if it's commonly held) that people who shoot the police are generally a much, much greater threat to society and everyday citizens than one felon killing another felon for a specific reason (which is much more common these days.) They aren't machines.

Indianapolis operates with half the number of Police Officers that we need. The LEO’s on every shift are spread out so far in their districts that responding to complaints is about all they can do. With our limited number of officers being proactive in law enforcement is almost extinct.
If given the chance our LEO's would rather catch the bad guys before the deed is done instead of taking the report too late to catch those responsible.
The time to criticize our LEO’s isn’t when one is fighting for his life in a hospital. Those of you who are doing so need to rethink your actions and show a little class.

I'm glad they caught the slimeball. I have the same questions as AI as to why this guy was on the street. The cops I know say the same thing about the revolving door.

That said, please support your claim that we need twice the police.

Doing admittedly rough math, it looks like Indpls has only slightly more citizens per sworn officer than NYC.

And yes I'm talking about Broken Windows... but it was about busting the turnstyle jumpers and the thugs on the subway that set the tone (oh, and you picked up the guys who had a warrant while you were at it)

Marco, don't try to park a weak argument behind a fusillade of emotion.

The cops view each other as superior to us. It's a big problem.

Okay, you hate the police. That much is blatantly obvious. Until you can do better I'll just stand behind my previous comment.

Marco, your "statement" is vapid gibberish and raw avoidance of legitimate discussion.