Don't Let The Door Hit You On The Way Out, Keith 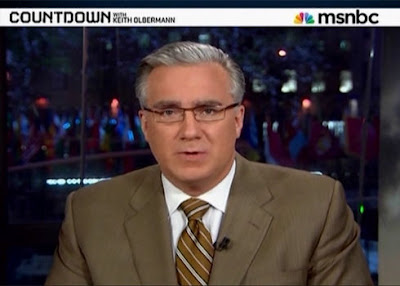 The world's worst cable TV news show host Keith Olbermann gave his final sign off for MSNBC's "Countdown With Keith Olbermann" tonight after the network ended his contract. Talking Point Memo's Josh Marshall expressed total shock at his departure. Marshall appeared during the first segment of his show and received no indication it was Olbermann's last broadcast until he arrived home and found an e-mail announcing the end of the show in his inbox. "I doubt I would have had any heads up or known anything was happening if Olbermann was going to go off the air," Marshall wrote. "But I was a bit more stunned than I might otherwise have been because I was just over there." Here's the terse e-mail message sent out tonight by MSNBC announcing his departure:

MSNBC and Keith Olbermann have ended their contract. The last broadcast of "Countdown with Keith Olbermann" will be this evening. MSNBC thanks Keith for his integral role in MSNBC's success and we wish him well in his future endeavors.

"[H]is integral role in MSNBC's success"? What success? Although his viewership is higher than other MSNBC news talk shows, his ratings are still well below every Fox News evening show and draws an audience only about  a third the size of Bill O'Reilly's show against which he goes head to head. I'm surprised this repulsive guy managed to hold on to his job as long as he has. MSNBC couldn't do much worse than him. Here's his final sign-off:

Visit msnbc.com for breaking news, world news, and news about the economy
Posted by Gary R. Welsh at 11:36 PM

Republicans lied us into two wars; they cheer a brutal police state that destroys our freedoms; they are superstitious, authoritarian, anti-intellectual and mean.

Olbermann opposed this evil, making us all freer, if only just a bit.

This country would be better off with more Olbermann and less Fox.

@ Cato, can you tell me which Presidents got us in to WWII and Viet Nam and which President got us out of Viet Nam?
Our history isn't just fifteen years old. You need to think before you type.

@indyernie -- I used to say to students during the mid-2000s to never let the Democratic Party say they are a party of peace because of their Presidential history of leading the country into the Korean and Vietnam wars, almost half-jokingly, but with some truth to the statement.

However, I don't think your inclusion of World War II being started by Democrats is warranted, and it shows a bad knowledge of history on your part; perhaps you should not denegrate others about not knowing history. The US would have gotten involved in World War II eventually, also, had the Republican Wendell Willkie won the presidency. Even though he accused Roosevelt of wanting to go to war, he was not really an isolationist and later helped Roosevelt in support of Lend-Lease, the thawing of isolationism in the lead-up to war, and eventually with the war effort itself.

Sure, Willkie was a former Democrat, but the Republicans knew that (and knew he was leaning towards helping the British as they were alone in World War II) when they nominated him. If they would have nominated the isolationists Taft or Dewey and one of them had won, the US still would have entered the war at some point (I believe) because the Japanese had been spoiling for a fight for years (hell, Theodore Roosevelt said, some 30 years earlier, they'd attack the US at some point in the future), and so had Hitler.

So, I guess if you could, indyernie, could you tell me how the US would not have entered World War II at all had a Republican been president as you seem to imply?