George Ryan Gets A Cell Mate At Terre Haute Prison 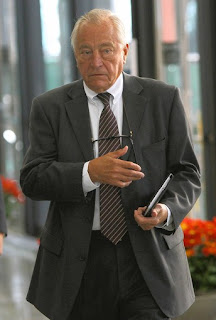 Former Illinois Gov. George Ryan is going to have a cell mate at the federal prison in Terre Haute where he is serving a 6 1/2-year prison sentence for public corruption in office while he served as the state's Secretary of State. Former Chicago Alderman Edward "Fast Eddie" Vrdolyak arrived at the prison today to begin spending a 10-month term for his conviction on charges he arranged a $1.5 million kickback on a real estate deal. U.S. District Judge Milton Shadur originally sentenced Vrdolyak to five years of probation and community service but got slapped down by the 7th Circuit Court of Appeals for letting Vrdolyak off with a "slap on the wrist." U.S. District Judge Matthew Kennelly sentenced Vrdolyak to 10 months in prison and fined him $250,000 on remand.

Vrdolyak, a Democrat, is best known for his role leading the opposition in the Chicago city council to the city's first black mayor, Harold Washington, who also served time in prison for bilking his law clients and failing to pay income taxes. Vrdolyak briefly switched to the Republican Party to challenge Washington for re-election after Washington won his first race narrowly over Republican Bernard Epton. Those were the last competitive mayoral races in Chicago. Vrdolyak once was accused of attempted murder earlier in his political career and has been disciplined on a couple of occasions by the state bar association for improper advances he made to personal injury clients and allegedly double-billing clients he represented in sexual harassment cases

Rahm Emanuel appears poised to walk into the mayor's office this year as his opponents struggle to raise money to match the large war chest of more than $12 million he has already amassed in just 3 months of campaigning. Emanuel will prove to be just as corrupt as all of Chicago's most recent mayors. A recent poll shows Emanuel way ahead of his nearest opponents with 44% of the vote compared to 21% for former U.S. Senator Carol Mosely Braun and 16% for Gary Chico. It's the Chicago Way to elect the most corrupt candidates possible to office and the voters there wouldn't have it any other way.

If you want to entertain yourself with the musings of an investigative reporter on the political corruption in Chicago involving Emanuel and Obama, check out this interview with a former naval officer, state department veteran and NSA official, Wayne Madsen, who now publishes Wayne Madsen Reports: