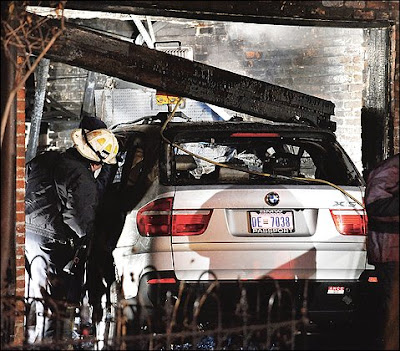 A key D.C. lobbyist for Progress Energy, Ashley Turton, was found dead after her BMW SUV encountered a low speed crash and caught fire in the garage of her Capitol Hill row house early yesterday morning, the same day Duke Energy announced its plan of merger with Progress Energy, making it the nation's largest public utility. A neighbor called the fire department to alert them to a blaze in the home's garage. News reports indicate her husband, White House Deputy Director of Legislative Affairs Dan Turton, had initially told emergency responders all persons in the home were accounted for until firefighters extinguished the burning automobile and discovered his wife's body. Politico reports:

A veteran congressional aide who worked most recently as a lobbyist and was married to a senior White House legislative affairs official was found dead in her car Monday behind the couple’s Capitol Hill home following a low-speed car crash and subsequent fire.

Ashley Turton, whose husband, Dan, is the White House’s deputy director of legislative affairs for the U.S. House, died in the early-morning incident in the garage behind 800 A Street SE, friends, her employer and congressional leadership aides said. City fire and police units responded to the vicinity of the home at about 5 a.m. Monday, according to fire department spokesman Pete Piringer.

“It had heavy smoke and fire conditions in a garage—an attached garage of a 2 and ½ story rowhouse,” Piringer said. “The homeowner initially indicated that everyone in the house was accounted for. Firefighters were able to quickly knock down the bulk of the fire during the firefighting operation, but they did find an adult occupant of the vehicle [in the garage] deceased.”

Police have not officially identified the victim, but the White House, congressional leadership aides and Progress Energy Inc., the company where she worked, all confirmed that Ashley Turton died in the car fire . . .

Authorities have not determined the exact cause of the crash or why the car, a 2008 BMW X5 sport utility vehicle, caught fire in a low-speed crash.

“The leading theory is accidental, [that] the car crashed through the garage doors and…was found on fire in the garage area,” Piringer said, adding that the incident is under joint investigation by the fire and police departments. “There were some unusual circumstances – just the way the car was, low-speed, significant fire, things like that….For the most part, the fire was confined to the area of origin.”

Neighbors say Ashley Turton was heading to airport for an early flight . . .


Progress Energy on Monday announced a merger with Duke Energy that would create the country’s largest utility company, Hughes said. Turton would have played a key role on Capitol Hill discussing the merger,

“She certainly would have had a role in notifying legislative staff,” Hughes said. “She was a regular liaison with staff members.”