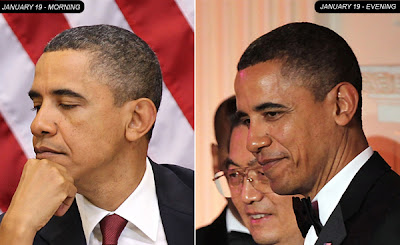 Yeah, it's pretty obvious Obama had  a color job done on his hair the day of the state dinner with China's President Hu. That's nothing. Investigative journalist Wayne Madsen claims a member of the congressional black caucus told him he found it a bit odd when he first met Obama that he used clear nail polish on his well-manicured finger nails.
Posted by Gary R. Welsh at 5:23 PM

I color my hair to look younger too.

I'm more concerned with the smoking gun of the missing birth document.

What O doesn't realize, Asians consider grey hair as a sign of wisdom and to revere. Duhh. He blew that one too! Wonder when others will applaude Hawaii's Abercrombie for throwing gas onto the fire about the missing long form birth certificate. Looks like the birthers are being proven right with every passing day...google Lt Quarl Harris, for the darker side of our govt...