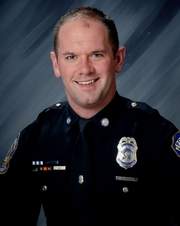 Very sad news comes this evening from a brief statement given by IMPD Chief Paul Ciesielski at Wishard Hospital. Doctors determined the injuries he sustained from Sunday morning's shooting were worse than earlier thought after reviewing the results of an MRI scan taken today and that he would not recover from his injuries. His family has authorized steps to begin the process of ending life support systems that are keeping him alive and donating his organs. Moore would become Indianapolis' tenth murder victim of the year and is one of ten law enforcement officers across the country shot while in the line of duty in recent days. Our hearts and prayers go out to the Moore family, which has many years of service as police officers for this community. Both of Moore's parents served as IMPD officers for many years. Indiana Department of Correction officials have admitted the man who shot Moore, Thomas Hardy, was mistakenly released from the Marion Co. jail after he was arrested for theft while out on parole. Hardy had 11 prior convictions prior to committing a string of thefts in November. At the time of his arrest Sunday evening, he was suspected of not only shooting Officer Moore, but stealing a car and robbing a store while holding up a store clerk at gunpoint. Mayor Greg Ballard earlier announced he was delaying his planned state of the city address scheduled this week in light of the latest development.

UPDATE: The Indiana Department of Correction announced this afternoon it has suspended without pay the parole officer responsible for monitoring Hardy as it continues to investigate a tragic set of errors that made it possible for Hardy to be on the streets and inflict so much harm. The department did not identify the suspended parole officer.

UPDATE II: WTHR is reporting Officer Moore passed away early this morning a day after the decision was made to remove life support.
Posted by Gary R. Welsh at 5:46 PM

Tragic, sad and so needless. I am furious that this state is so lax on dealing with the obviously-not-rehabilitable members of society.

The weight given to apparent 'threat to society' far exceeds that given to the obvious fact -- people that spend 85% of their adult life in prison, are serial felons, and are rearrested almost immediately after being paroled need to be locked up for life.