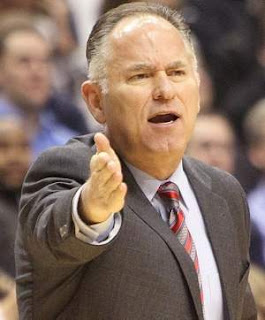 It looks like the Indiana Pacers took Star sports columnist Bob Kravitz blistering column last Friday about Coach Jim O'Brien to heart. The Star reports on O'Brien's firing following the team's disappointing loss last night to the Chicago Bulls where O'Brien got tossed by officials from the game after receiving two technical fouls. The Star's Mike Wells reports on a 4:00 p.m. press conference called this afternoon to make the announcement official:

The Indiana Pacers have parted ways with head coach Jim O'Brien according to multiple sources.


The Pacers considered firing O'Brien after the team returned from its 0-4 West Coast road trip, according to a source.

Assistant Frank Vogel is expected to coach the team for the remainder of the season.

The Pacers have a called a 4 p.m. press conference.

Known for not mincing words when it comes to offering opinions, the Star's Bob Kravitz called on the Pacers to end the charade and fire O'Brien.

It's time for Simon, whose franchise is mired in a horrific slump and remains south of a playoff spot in the woebegone Eastern Conference, to do the hard thing and make the change the ever-dwindling fan base demands.


He needs to tell team president Larry Bird to fire Jim O'Brien, then insist that Bird coach this group for the rest of the season.

If Bird refuses to do it, then Simon has to drop O'Brien, hire an interim coach off the Pacers' bench and tell Bird his services will no longer be needed after this season.

Will Bird or an interim coach make any real difference?

But by making a change now, Simon will send a very strong and important message to this city: We won't stand for this any longer . . .

O'Brien lives in my neighborhood and, unlike other Pacer coaches, has been very active in the community, particularly at St. Mary's Catholic church. O'Brien, who owns homes in other states, will likely return to one of those homes. He will be sorely missed by the community groups who benefited from his and his wife Sharon's charitable efforts and strong community spirit.

A controversial decision by the Capital Improvement Board last year rewarded the Pacers with a $33.5 million subsidy to cover operating expenses on Conseco Fieldhouse, which the team uses rent-free and from which it is allowed to retain all revenues for both game and non-game related events, and to purchase a new digital ribbon board and scoreboard for the Fieldhouse. Mayor Greg Ballard insisted the subsidy was necessary to prevent the team from leaving the city, although penalty provisions in their long-term lease would have allowed the CIB to collect a large break-up fee, largely offsetting any attending harm from the team's departure. Pacers owner Herb Simon bought out the 50% interest of his late brother Mel last year from his estate for an undisclosed sum. The Pacers owner has made dubious claims the team has lost $150 million in recent years since moving into the new Conseco Fieldhouse taxpayers were forced to build in place of Market Square Arena, which was later leveled, in order to keep the team from relocating.

UPDATE: Listening to Larry Bird explain the firing at the live press conference. Bird not happy that O'Brien wasn't giving enough playing time to the younger players. Bird said Herb Simon left it up to him to make the call to replace O'Brien with assistant coach Frank Vogel. Bird also said Herb told him there was plenty of money to make any trades Bird thought was needed to continue the team's rebuilding efforts, which makes one wonder whether Herb wasn't speaking out of both sides of his mouth as Bren Simon says he has a tendency to do when he claimed the team was bleeding cash badly and needed the $33.5 million subsidy Mayor Greg Ballard was all too happy to give his team.

UPDATE II: Vogel speaking now live at the press conference. He says the Pacers have a great team and he's confident he can turn the team around quickly. Vogel thinks the plan all along was for him to succeed O'Brien eventually, if not under these circumstances. Vogel says he is confident he has the players' support.

UPDATE III: Bob Kravitz take is that the call to fire O'Brien was made by Herb Simon, not Larry Bird:

This was the owner's call, pure and simple. This was Herb Simon rolling into team president Larry Bird's office last week and telling the Hoosier legend that a head coaching change must be made.


The Indiana Pacers will try to sell it otherwise, and even Bird tried to sell it Sunday afternoon as his decision, but that's a complete fabrication. Simon wanted coach Jim O'Brien gone after the team's winless West Coast trip, and when that didn't happen, Simon insisted upon O'Brien's ouster after Wednesday's miserable home performance against Orlando . . .

Why should we care that the CEO of a multi-million-dollar enterprise (aka the Pacers) fires one of his minions?

It's business as usual.